Thomas Markle has caused his daughter Meghan Markle a lot of unnecessary embarrassment. The 74-year-old’s constant interviews with the press have created a media storm for the Duchess of Sussex, so much so that she reportedly feels a bit out of place among her royal peers. Will Meghan Markle reunite with her dad? That possibility is seemingly becoming less and less likely with every interview he does, as well as her half-sibling’s subsequent interviews. Things have reportedly gotten so uncomfortable for Meghan that she’s thinking of calling in a reinforcement she never wanted to use before: her mother, Doria Ragland. Kensington Palace declined to comment on this report.

A source told The Daily Mail, "So far, Meghan’s mom hasn’t gotten involved, but that may all change when they see each other in person. Meghan has been adamant that her mom not get dragged into all the drama." (Meghan is traveling to California soon to visit her mother, according to reports.) "But if anyone can talk some sense into her dad, it’s Doria," the source said, adding, "Meghan is now open to the possibility of her mom working some magic behind the scenes." Who do you call to fix things when your life goes to sh*t? Your mom. Moms fix everything. 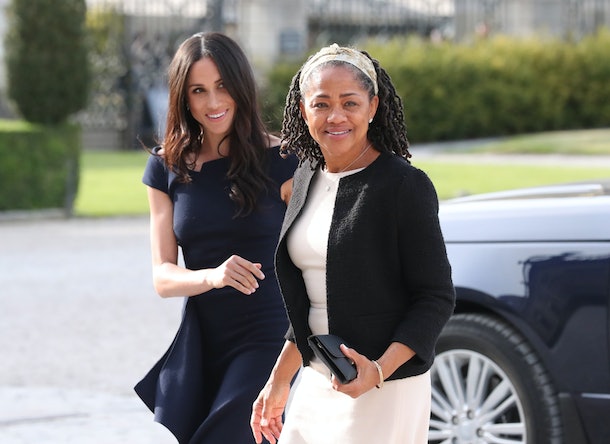 While Meghan and Harry are hellbent on Kensington Palace not issuing any kind of statement about her father, Meghan reportedly feels responsible and wants to help resolve the chaos. "It has just become so embarrassing for Meghan. Like the elephant in the room when she’s with people she doesn’t know very well," the source told the outlet. "In a perfect world, Meghan would have a reunion with her dad and he would not say one word about it."

We all know that’s the last thing that would happen. Based on his past actions, it’s safe to assume if Thomas Markle did meet with his daughter, he’d probably talk to every outlet imaginable and also tell his other children, who have been attacking Meghan in the press just as much as their father has.

The source notes that this is one of the main reasons Meghan feels she can’t reconcile with him. The source says that even if he didn’t go to the press about it, he would "most likely tell his other children about it, and one of them will go blab about it to the world."

While reports of how the royal family has been responding to the drama with Thomas Markle have previously been supportive, the queen is reportedly getting fed up with the whole saga. A source recently told The Sunday Times that Meghan doesn’t want to release any statements about him because the playing field isn’t level. "There have always been fears over his vulnerability," the source said, "Now he’s got himself into a cycle of talking publicly. It’s very sad." The source noted that Prince Charles is "sympathetic" toward Meghan’s plight, but the queen? Not so much anymore. "I suspect the Queen will be rolling her eyes and thinking: Crikey, what is going to become of all this?" the source said. My thoughts exactly, your highness. My thoughts exactly.

To make a long story short, Meghan wants this drama to be over, but she can’t trust anybody when it comes to her father and siblings speaking to the press. Doria, plz help.