If you’re a fashion person and it’s the first Monday in May, you know exactly where everyone that is anyone in the fashion industry is. Top-tier designers, magazine editors, and celebrities alike have all arrived on the Upper East Side for the Met Gala, the annual fundraiser for the Costume Institute at the Metropolitan Museum of Art. Fashion’s biggest night has a different extravagant theme each year, and the tweets about the 2018 Met Gala theme prove that this may have been the most controversial year to date.

The Gala takes place on May 7, but the planning and anticipation for this major event has been happening for months. And now that the big night has finally arrived, everybody is buzzing about all the celebs and designers that have embraced this year’s theme.

On November 8, 2017, the Met Museum announced that this year’s theme (and subsequent exhibit that’s opened as a part of the Gala) would be titled, “Heavenly Bodies: Fashion and the Catholic Imagination.” The exhibit is meant to "examine fashion’s ongoing engagement with the devotional practices and traditions of Catholicism," according to the museum’s site. The official dress code has been dubbed as "Sunday’s Best" — but the way that might be interpreted by celebs and designers is a coin toss. Given the religious subject of the exhibit, the red carpet looks were guaranteed to stir up talk.

Even before celebrities hit the red carpet on Monday night, people on Twitter were talking about the highly anticipated event.

And once the limos began to pull up to the Met steps and the stars flaunted their best Vatican-inspired and Sunday’s best looks, Twitter absolutely blew up.

Religion is already a controversial subject on its own. And intersecting religion — specifically the Catholic religion — with fashion on as grand a scale as the Met Gala warrants was bound to stir up some controversy on the red carpet. But controversy is what dominated the headlines, and the theme of tonight’s event is proof of that fact.

The Met Gala is one of the most important red carpet events of the year. It’s on par with the Academy Awards and the Cannes Film Festival in terms of it’s importance for the fashion world. But this particular event over the years has become a place for celebrities and designers alike to make their most bold and daring fashion statements.

Last year’s 2017 theme was titled "Rei Kawakubo/Comme des Garçons: Art of the In-Between” — a tribute to the Japanese designer behind the avant-garde label that has made such a profound impact on fashion. But paying homage to a designer and their work doesn’t exactly warrant as much freedom as an abstract theme does. The only gala attendee that seemingly hit the Comme des Garçons mark was unofficial Met Gala queen Rihanna, who stole the show in an unreal sculptural 3-D creation designed by Kawakubo herself. 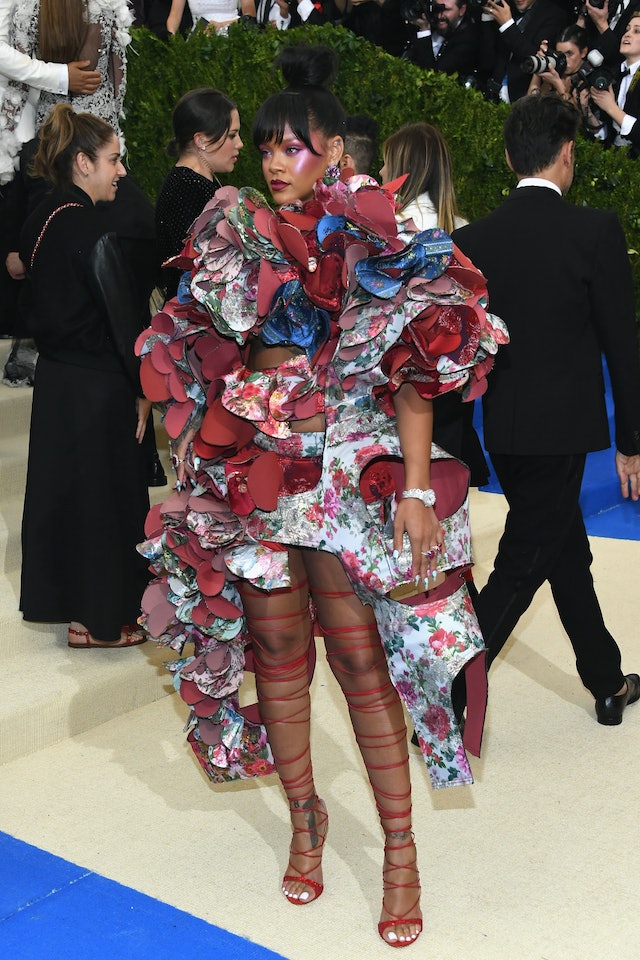 In the year prior to Rihanna’s show-stopping Comme des Garçons look, the theme “Manus x Machina: Fashion in an Age of Technology” reigned supreme. 2016’s futuristic-themed Met Gala inspired a ton of sleek and sexy looks, including this iconic Taylor Swift silver minidress (which was incidentally her last Met Gala appearance) and Kim and Kanye’s incredible Balmain couple’s outfit.

But clearly this year’s theme inspired a lot more creativity from everyone in attendance at the gala tonight. The controversial theme has inspired some of the most daring ensembles that we’ve seen in the history of the Met Gala. And clearly the rest of the world agrees, as evidenced by these passionate tweets.