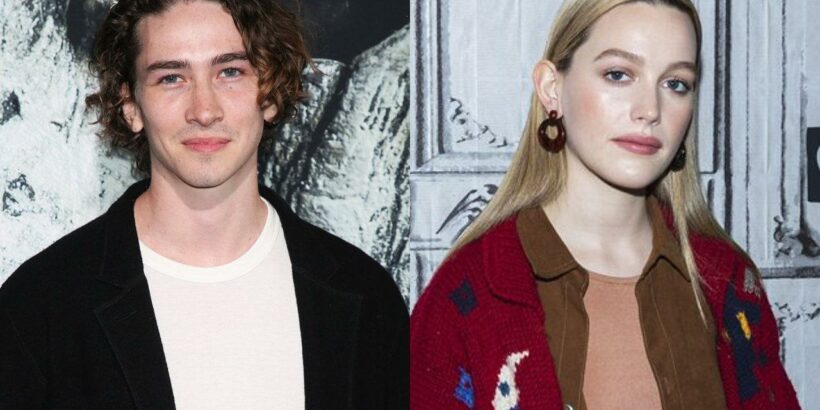 A little over a week after another sighting, the ‘Once Upon a Time in Hollywood’ actress and the ‘Halloween Kills’ actor are spotted at a cannabis shop before grabbing their drinks together at a cafe.

AceShowbiz –Victoria Pedretti and Dylan Arnold are adding more fuel to the speculations about their relationship. The “You” co-stars were photographed shopping together in Los Angeles just a little over a week after another sighting.

In photos surfacing online, “The Haunting of Bly Manor” actress and the “After” star were spotted spending time together on Monday, November 15. The rumored couple was caught on camera at a cannabis shop before they grabbed their drinks at a cafe.

For the outing, Victoria wore an “I Love New York” T-shirt, black leggings and trainers. The 26-year-old actress shielded her complexion with a navy blue baseball cap and black face mask while treating herself to a revitalizing iced tea.

In the meantime, Dylan kept it casual with his wildlife print T-shirt, jean shorts, red socks and sneakers. The “Halloween Kills” actor, who held a large iced coffee, paired his outfit with a bright blue face mask and a bucket hat.

Prior to their Monday sighting, Victoria and Dylan were caught on camera shopping together for home goods and toiletries on November 7. At that time, the “Once Upon a Time… in Hollywood” actress carried a large laundry detergent while the 27-year-old actor held rolls of toilet paper, sponges and other household supplies.

The pair, known for their roles as Love Quinn and Theo Engler on the hit Netflix series, also took time from running errands to grab a cup of coffee. “The Haunting of Hill House” actress was also seen carrying two small cardboard boxes. Later that day, the rumored couple reportedly entered the same house with toothbrushes in hand before leaving together.

Speculations that the co-stars are an item have been swirling for weeks since multiple sources made submissions to the popular Instagram celebrity gossip account Deuxmoi. In a post, a source wrote, “New Cute Couple: You.”

“Victoria Pedretti and Dylan Arnold (guy who plays Theo in S3 of YOU) are dating and she’s pretty crazy about him!!” the source continued. Another source then said they had actually spotted the rumored couple out to lunch together.