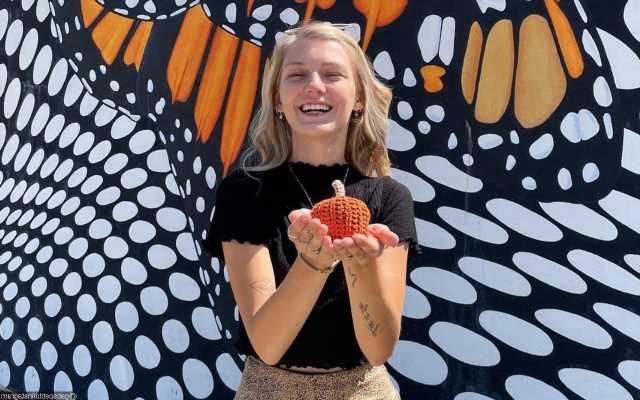 According a report from the Moab City Police Department, the 22-year-old YouTube personality slapped Brian Laundrie after an argument but the couple didn’t want to press charges.

AceShowbiz -YouTube personality Gabrielle Petito went missing amid her cross-country road trip with her fiance Brian Laundrie. She was reported missing by her parents on September 11 after they failed to contact her for weeks.

According New York’s Suffolk County Police Department, Gabrielle’s parents didn’t speak to her since the last week of August. They also claimed that she was supposedly traveling through the Grand Teton National Park in Wyoming.

Gabrielle and Brian shared a video of their cross-country road trip titled “VAN LIFE | Beginning Our Van life Journey” back on August 19. The 8-minute video featured the couple driving through California, Utah and other states in their 2012 Ford Transit van. Later on August 25, Gabrielle posted a photo of herself holding a knitted pumpkin.

Gabrielle’s mother, Nicole Schmidt, said that she last FaceTimed her a day earlier. The 22-year-old YouTuber continued to send her texts until August 30, but Nicole told NBC News that she was unsure if it was her daughter who sent the texts.

Nicole said that while she had “general” concerns about her daughter’s decision to travel across the country with her fiance, she claimed that the family was “excited for them.” Gabrielle’s mom also told KSL TV, “She wanted to cross the country in the camper van and live the van life and live free. This was her dream.”

“She seemed OK to me at the time, other than I don’t know where the relationship was going with the boyfriend,” she continued. “She could be alone somewhere. She could be stranded somewhere in the wilderness and she needs help. I hope everyone is looking for her.”

In related news, Police in Utah stated that they responded to a physical altercation last month between a New York woman and her fiance while they were on a cross-country road trip. According a report from the Moab City Police Department which was released Wednesday, September 15, Gabrielle slapped Brian after an argument. They, however, didn’t want to press charges.

Meanwhile, the Suffolk County Police Department revealed in a press release on Wednesday, September 15 that Brian, who has been dating Gabrielle for two years, had returned to his parents’ home in North Port, Fla., on September 11, 10 days before Gabrielle’s parents reported her missing. “As of now, Brian has not made himself available to be interviewed by investigators or has provided any helpful details,” the police said, adding that Brian is a person of interest.

Authorities shared that they have no reason to believe a “crime occurred here in North Port.” Additionally, the couple’s van was “fully processed for evidence along with FBI agents” on Tuesday evening.