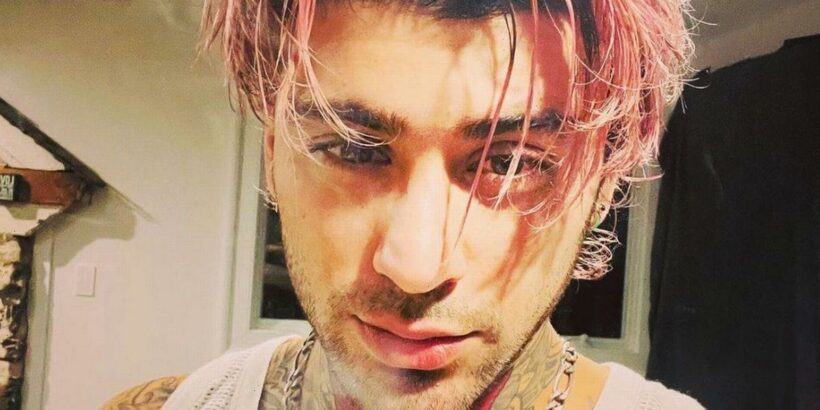 Former One Direction star Zayn Malik has shown off his edgy new pink hairstyle and extensive tattoos in a smouldering selfie.

The 29 year old father of one posted the snap to Instagram, in which he can be seen staring intensely into the camera and showing off his muscular arms in a white knitted vest top.

Around his neck he wore a chunky silver necklace and showed off his many body inkings that stretch out across his neck and arms.

His newly-died pink hair was styled into a messy disarray that tumbled over his eyes, and he left the image without a caption.

Zayn's fans were quick to heap praise on the star, with one person writing: "THE PINK HAIR LOVE".

Another person commented: "Lord have mercy".

Someone else wrote: "the prettiest boy in earth," whilst another commented: "I don't know how to breathe anymore."

Zayn is known for his love of bold hairstyles, having died his naturally black hair bright blue and peroxide blonde in the past.

Zayn rocketed to worldwide fame as part of chart-topping boyband One Direction after they were formed on The X Factor in 2010.

Zayn's profile rose even more when he began dating supermodel Gigi Hadid, 27, with whom he shares a one year old daughter, Khai.

The pair have since split, not without a lot of drama, after Zayn hit the headlines in October 2021 after he allegedly got into an altercation with Gigi's mother, Yolanda Hadid, 58, in an argument over Khai whilst Gigi was away.

The singer is alleged to have called Yolanda "f***ing Dutch s**t” and told her: "Stay away from [my] f***ing daughter."

Initially, Zayn took to Twitter to release a statement denying the allegations.

He wrote: "As you all know I am a private person and I very much want to create a safe and private space for my daughter to grow up in.

"A place where private family matters aren't thrown on the world stage for all to poke and pick apart.

"In an effort to protect that space for her I agreed to not contest claims arising from an argument that I had with a family member of my partner's who entered our home while my partner was away several weeks ago.

"This was and still should be a private matter but it seems for now there is a divisiveness and despite my efforts to restore us to a peaceful family environment that will allow for me to co-parent my daughter in a manner in which she deserves, this has been "leaked" to the press.

"I am hopeful though for healing for all involved with the harsh words shared and more important I remain vigilant to protect Khai and give her the privacy she deserves."

Zayn later pleaded guilty to one count of harassment following the alleged altercation with Yolanda.