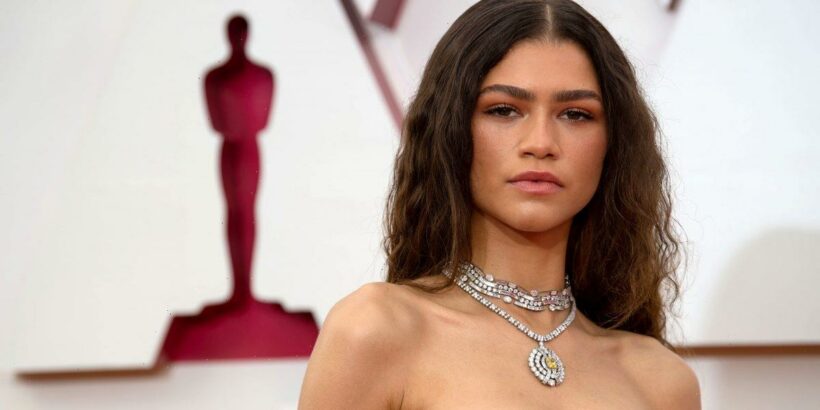 Zendaya recently wore a neon Valentino gown to the 2021 Oscars. The 24-year-old actor also stunned fans when she added millions worth of Bulgari diamonds on her neck and ring. However, how much does Zendaya earn from her multiple jobs? Here’s what Showbiz Cheat Sheet knows.

Although she’s been in the spotlight since playing Rocky Blue on Shake It Up, Zendaya has caught attention for her style in recent years. The actor often seizes an opportunity to turn heads on the red carpet. Whether she’s wearing Giorgio Armani to her first Emmys or a bright, taffeta gown at the Critics Choice Awards, Zendaya doesn’t shy away from taking fashion risks.

For the 2021 Academy Awards, Zendaya and her longtime stylist, Law Roach, collaborated on a stunning look that paid homage to one Euphoria star’s fashion inspirations, Cher. In addition to wearing the Valentino dress, which glows in the dark, Zendaya also wore yellow open-toed heels from Jimmy Choo. The actor then added a canary yellow face covering for the public event.

Zendaya and Roach took their vision to a “whole new level” by adding several items from Bulgari. The eye-catching jewels are worth over $6 million and included a brooch and tassel collar necklace, 30-carat yellow diamond ring, a massive emerald-cut diamond ring, and pear-cut yellow diamond drop earrings. Despite the exquisite jewelry, Roach said he and Zendaya wanted to go for a “boho chic” approach. The K.C. Undercover alum wore loose curls and gold makeup with a subtle lip gloss for makeup and hair.

“It’s a really glamorous, boho-chic look,” Roach said to People. “She’s a fashion girl, and after so many looks together, we have this unquestionable trust. We like to have fun with fashion and create looks that people will talk about.”

Roach’s prediction that Oscars viewers would talk about Zendaya’s dress came into fruition on Sunday, April 25. During the Academy Awards pre-show, the HBO star showed off her million-dollar outfit. Roach also shared details about the look on his Instagram account. Shortly after he posted the look, several fans praised him and Zendaya for pulling off another buzzed-about collaboration.

“A whole vision!!” another shared.

Many Instagram commenters also recognized the luxury jewels Zendaya wore at the 2021 Oscars. Although the Bulgari diamonds cost millions, the Disney Channel alum can afford them. According to Celebrity Net Worth, Zendaya has a net worth of $15 million. In addition to starring in several movies and films for Disney since 10, Zendaya is also a model, designer, and brand ambassador. The multitalented star also appeared in music videos for artists such as Beyoncé and Bruno Mars.

In 2018, Zendaya officially left Disney Channel. After K.C. Undercover wrapped that same year, she landed a starring role as Rue Bennett in Euphoria. The teen drama earned Zendaya an Emmy for Best Actress in a Drama Series. Euphoria took a hiatus in 2020 following the COVID-19 pandemic. However, Zendaya appeared in two special episodes for the series last year. The show started shooting new episodes in April.

Since Euphoria’s hiatus, Zendaya has worked on other projects. She starred alongside John David Washington in the Netflix film Malcolm and Marie. The actor also voices the character of Lola Bunny in Space Jam: A New Legacy.