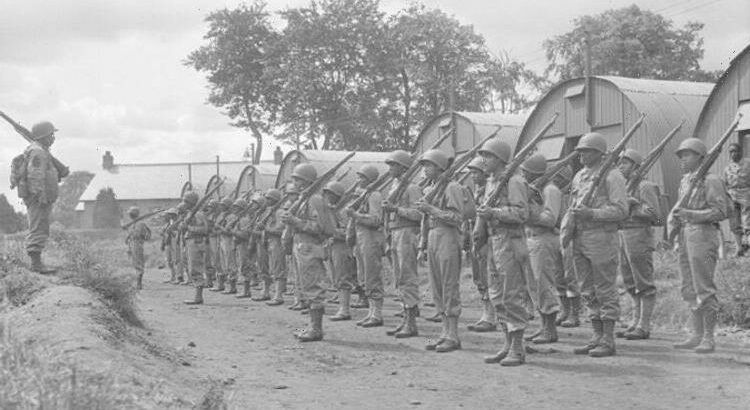 James celebrated his 101st birthday last week, wearing his treasured World War II Veteran baseball cap – one of the last survivors of an extraordinary series of so-called “mutinies” by black troops stationed in Britain who bravely challenged the prejudice of their own comrades.

“We were preparing to fight Hitler’s army in Europe, but instead found ourselves fighting racism in the US Army,” says James. “And racism was winning.”

The first American troops arrived in Britain only six weeks after the attack on Pearl Harbour in December 1941.

By May 1944, two million US servicemen were stationed in Britain waiting to invade France.

The British public mostly welcomed the black servicemen who came to defend our shores in the Second World War, but many white GIs from America’s Deep South brought with them deeply ingrained racial prejudices. And James was one of dozens of black US soldiers jailed – along with others sentenced to death – for alleged mutiny.

His crime: questioning racism by a superior officer.

Now he is fighting to belatedly expunge his conviction and clear his name.

The US Army segregated its black soldiers in the UK, and racist clashes shocked many Britons.

White GIs ob ordered black soldiers to give up their bus seats and to live in inferior billets, as if they were subject to the racist “Jim Crow” rules of the Deep South. Black soldiers who dated white British women risked abuse, beatings and even murder by their white American comrades.

Bernard James, from Chicago, was a Southern good ‘ol boy’s worst nightmare: a highly educated black man, a brilliant mathematician and engineer fluent in French and Spanish. After the war, he earned a Harvard master’s degree, and worked on the Mercury, Apollo and Space Shuttle missions, as well as theViking mission to Mars. But in January 1943, he was simply Technical Sergeant Bernard James, 22, drafted into the 641st Ordnance Company of the US Army, and shipped to England.

And it was the first time he encountered the attitudes of the South. “I hadn’t experienced racism in liberal Chicago, but in the US Army black and white troops were segregated,” James recalls. “We were given inferior food, clothing and housing. We were given no promotions, and no medals for battlefield bravery. Our company was all black except for six white officers, who routinely used “the N-word” and treated us like dirt.

“We were stationed in Martock, Somerset, and the English people welcomed the black soldiers with open arms.

“Everyone was friendly, especially the English girls, who were surprised, because white soldiers had told them that black soldiers had tails.

“Our commanding officer, Capt Herman Hinton, who was from a small town in rural Mississippi, and several other white officers hated the way that the British treated the black troops with respect.

“They were angry when we landed in Liverpool and took a train south that some English girls bought us Coca-Cola.

“One officer wrote home saying, ‘I’ve seen five English girls with black boyfriends. What’s the matter with these women?'” Dances were held where James and his fellow black soldiers would often party with the locals.

“The English girls danced with us, dated us, and even married some of us as war brides,” James recalls.

“The white officers hated it. One suggested that if we wanted to dance we should take the train from Somerset to London, where we could find black girls to dance with. When one of the black soldiers asked our commanding officer for permission to marry a white English girl he loved, he was refused. Morale was low.”

Growing discontent spread among black American troops stationed across Britain. “We heard about black soldiers being arrested for mutiny, though they were just protesting racism,” says James.

“Black soldiers were being falsely accused of rape and hanged, even though rape wasn’t a hanging offence in Britain, and the charges were often trumped up by racist white officers.

Many of the accused were illiterate, and didn’t understand the charges against them. Because I’d been to university and wasn’t stupid, I was considered ‘uppity’.”

In March 1944, Capt Hinton called 100 of his black troops to a meeting, demanding to know about their morale. When met with silence, Hinton asked black Sgt George Gayles, who replied: “The men are dissatisfied.”

“Are you dissatisfied?” asked Hinton. When Gayles said “yes”, he was demoted on the spot to private.

“I asked if it was fair to demote Gayles simply for answering a question,” says James. “Hinton ordered me to remove my stripes as well, busting me down to private. Several other black soldiers handed over their stripes in protest.

“We thought that was the end of it, but two months later military police armed with submachine guns arrested 18 of us, and after a quick court-martial we were all convicted of mutiny and jailed. It was like a goose trying to get justice from a jury of foxes.”

James was incarcerated at 300-year-old Shepton Mallet prison in Somerset, and put to work sorting through the clothing and possessions of dead US troops.

“I was angry that when D-Day came I was behind bars instead of invading Europe with my comrades,” says James today. “I didn’t want to die. I just wanted to do my part.”

Sentenced to 18 years, James was unaware that, back in America, a campaign was being waged to win his freedom.

Politicians and civil rights leaders protested his conviction, demanding a Senate investigation. After more than a year behind bars he was released when the war ended, and honourably discharged in 1947.

After leaving the Army, James completed his maths degree and went to Harvard, before moving to California where he joined NASA’s jet propulsion laboratory.

“I worked on trajectory and engineering for Mercury, Apollo, the Space Shuttle and Viking mission to Mars,” he says, speaking from his home in the Los Angeles suburb of La Mirada, California.

“I worked on trajectory and engineering for Mercury, Apollo, the Space Shuttle and Viking mission to Mars,” he says, speaking from his home in the Los Angeles suburb of La Mirada, California.

“I helped design the Apollo command module. I remember our delight when we landed Apollo 11 on the Moon, and my anxiety when Apollo 13’s mission almost ended in disaster. I went over all my calculations again to make sure they were correct.

“When the Shuttle Challenger exploded in 1986 I was worried anything I’d worked on might have caused the accident, but it hadn’t.” James married a white journalist, Florence, in 1949, and they were together for 65 years and had 10 children before her death in 2014, aged 93.

“I never harboured any resentment toward white people for my treatment during the war,” he says. “And I’ve happily returned to England many times.”

At 101, he is finally appealing to get his court-martial conviction removed from his military record, now under examination by the Army Review Boards Agency.

James welcomes the coming fight. “The first hundred years are the hardest,” he says, a smile on his face.