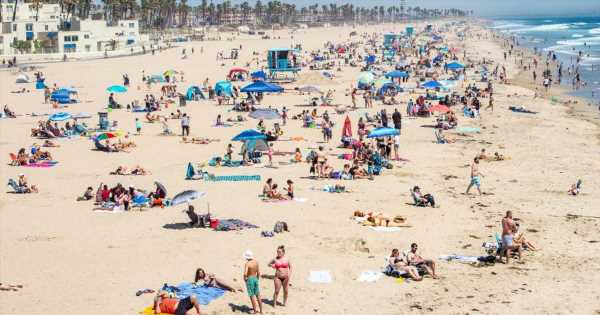 Huntington Beach Police declared an unlawful assembly Saturday night after around 2,500 people showed up for a party many say they heard about on TikTok. A user named Adrian’s invitation on the social media platform to his “Birthday Kick Back” went viral, prompting the massive turnout.

According to CBS Los Angeles, 149 people were arrested and an emergency curfew was instated from 11:30 p.m. to 5:30 a.m. Sunday morning. Of those arrested, 121 were adults and 28 were juveniles.

Charges range from vandalism and the firing of dangerous/illegal fireworks to failure to disperse and violation of curfew.

People all over the country claimed they would be attending the event, though it’s unclear how many made the trip. CBS Los Angeles spoke with one man from Stockton who traveled halfway across California to get there. He said he was just trying to have a little fun despite the pandemic.

Another attendee told CBS Los Angeles she was there for similar reasons. “It’s like don’t you remember when you were young? You just want to go and have fun, have parties, and we kind of lost that this year because of COVID,” Erica Ramirez said.

No significant injuries were reported by authorities, though police said that some businesses, police vehicles, and a lifeguard tower were damaged due to vandalism.