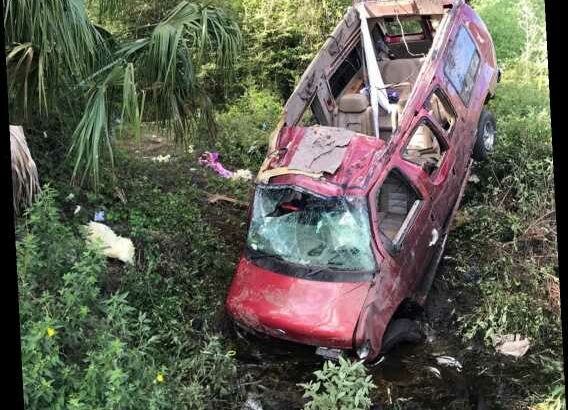 Three people are dead after authorities say a van carrying 10 vacationers from Maryland crashed on a Florida highway.

In a press release obtained by PEOPLE, the Florida Highway Patrol (FHP) confirmed the fatal incident and stated that a 4-year-old girl and her 19-year-old sister from Glenarden, Maryland, as well as a 37-year-old man from Upper Marlboro, Maryland, were killed in the crash.

Seven others, including a 5-year old child, suffered injuries and were transported to local hospitals, according to the press release.

Authorities said they believe the van drifted off the road before rolling over. The Daytona Beach News-Journal reported that the van ended up near a ditch filled with water.

According to the FHP, the crash's impact was so strong that it ripped off the van's roof and ejected multiple occupants. A puppy was also found at the site of the crash in the wreckage, the FHP said. It has since been turned over to its owner.

"[Troopers] said the pup was so happy when they found it," FHP's Public Information Officer Lt. Kim Montes told the News-Journal. "It was reunited with its owner."

Officials noted in the release that the van's occupants were all friends and family from Maryland who were returning from a trip to Orlando.

Investigators believe that several of the passengers were lying down or sleeping in the rear part of the van when it crashed, according to the release.

Troopers are currently investigating whether any of the occupants were wearing seatbelts, and said there were no car seats for the younger victims spotted at the crash site.

Following the incident, a 5-year old child was transported to Arnold Palmer Hospital with minor injuries, while two others were transported to Florida AdventHealth in Flagler in critical condition.

Four more people — including the driver, who suffered minor injuries, the News-Journal reported — were taken to Halifax Health Medical Center in Daytona Beach.

They are all in stable condition, according to the FHP.

As for the victims — who have not been publicly identified — the two sisters were pronounced dead at the scene and the man was located dead under the van, the News-Journal reported.

At this time, the incident remains under investigation.