When you get an invitation to the Met Gala, the pressure is on. The annual event at New York city’s Metropolitan Museum of Art marks the opening of the Costume Institute’s annual fashion exhibit. And as you’ve probably gathered, it’s almost like a costume party as celebrities, fashion editors, and other dignitaries choose extravagant designer outfits to fit with the night’s theme. But they don’t always get it right when they walk down the red carpet.

Below, check out the worst celebrity Met Gala looks of all time.

In 2001, the Met Gala went with the theme “Jacqueline Kennedy: The White House Years.” But Jessica Simpson didn’t seem to get the memo, and The Cut names this look one of the worst in Met Gala history. Instead of channeling the former first lady’s iconic style — with a cape, a coat, or a structured dress — Simpson wore an altogether too-modern watercolor effect gown. The only thing that Simpson got right? Kennedy’s fondness for strapless gowns.

Next: These outfits were way too casual for the black-tie event.

The color and the print is all wrong here. | George De Sota/Newsmakers/Getty Images

Jessica Simpson wasn’t the only celebrity guest who didn’t dress entirely appropriately for the 2001 Met Gala (then called the Costume Institute Gala) celebrating the clothes and style of Jacqueline Kennedy during her tenure as first lady. The band 3LW, or 3 Little Women, consisting of Adrienne Bailon, Kiely Williams, and Naturi Naughton, showed up in these bright ensembles for the gala. “Imagine being invited to the Met Gala and wearing this,” The Cut quips.

Next: This outfit made unfortunate use of animal print.

By the time the 2001 Met Gala rolled around, Hillary Clinton had just concluded her tenure as first lady of the United States. But you wouldn’t have known that based on the look she wore to the gala — an ensemble complete with a leopard-print gown. As The Cut puts it, “This one does not win the popular vote.”

Next: This ensemble fell flat.

This look from Jamie-Lynn Sigler pretty much a disaster. | Gucci via Getty Images

Another miss, according to The Cut? The gown that Jamie-Lynn Sigler wore to the 2003 Met Gala. “An important thing to note about this gown adaptation of the aughts-beloved T-shirt style is that it was worn to the ‘Goddess’-themed gala,” the publication notes. In fact, that year’s event had the theme, “Goddess: The Classical Mode.” But instead of wearing a more classical gown — perhaps something draped or pleated, for instance — the Sopranos actress went very 2003.

Next: This outfit had nothing to do with the theme.

She’s known for her style now, but back then, it was a nightmare. | Evan Agostini/Getty Images

Another celebrity who didn’t quite get the “goddess” theme right at the 2003 Met Gala? Victoria Beckham, who showed up in a transparent dress that looked a lot more tacky than transcendent. 15 years later, the look also seems a major departure from Beckham’s current sharp style. As The Cut puts its, “Beckham probably wants to forget this look from her pre-fashion-designer days.”

Next: Even the chair of the event has made a few fashion mistakes.

Some people love her mismatched look — but others, not so much.| Evan Agostini/Getty Images

The Cut makes a bold statement by singling out Anna Wintour, editor-in-chief of Vogue and chair of the annual event, as one of the worst-dressed at 2004’s Met Gala. But as the publication notes, “Just because you host fashion’s biggest night out doesn’t mean you always get it right.” As Who What Wear notes, the ensembles that Wintour has chosen to wear to the gala have changed a lot over the past 30 years. And while some people love her look each year, others think she’s had a few ups and downs getting dressed for the gala.

Next: This outfit was just perplexing.

For the 2009 Met Gala, attendees had to dress to celebrate the theme, “The Model As Muse: Embodying Fashion.” We’re not entirely sure what Madonna was going for with this look, but The Cut places it on the list of the worst Met Gala looks in the event’s history. “Even Madonna struggles to pull off $350 Louis Vuitton bunny ears,” the publication notes. The thigh-high boots don’t help, either.

Next: This ensemble turned heads for all the wrong reasons.

The lights on this dress were way over the top. | Larry Busacca/Getty Images

Katy Perry has a long history of wearing head-turning ensembles to the Met Gala. But in 2010, her fashion choices landed her on the list of the worst-dressed instead of the best-dressed. For a night themed, “American Woman: Fashioning a National Identity,” Perry came seemingly out of left field with a light-up gown. The ensemble does get some points for creativity. But as Bustle quipped, “the singer still appeared to have wandered off the set of Tron: Legacy.”

Next: This outfit didn’t have anything to do with the theme.

This look was strange (and weirdly boring) for the gala. | Timothy A. Clary/AFP/Getty Images

In 2011, the Met Gala celebrated the opening of an exhibition called “Savage Beauty.” The exhibition featured clothing and accessories created by British designer Alexander McQueen, and opened about a year after McQueen’s death. Instead of channeling one of the themes of the exhibition, Freida Pinto showed up in a perplexing Chanel gown with what PopSugar called a “quirky black tie and diamond-encrusted collar stays.” The Cut puts the look on the list of the worst Met Gala ensembles, describing it as “When Gordon Gekko boardroom-wear met formalwear.”

Next: This ensemble included a headpiece that was already out of style.

Another celebrity who made the list of the worst-dressed at the Met Gala in 2011, according to The Cut? Tennis star Serena Williams, who was the victim of bad timing when she chose her headpiece for the Alexander McQueen-themed gala. As The Cut reports, “When fascinators reached saturation point, Williams was there to officially bury the trend with this topper.”

Next: Nobody liked this unfortunate dress.

This patchwork dress wouldn’t work for anyone. | Larry Busacca/Getty Images

Bustle names Kristen Stewart’s 2012 Met Gala ensemble as another of the worst outfits that had nothing to do with the event’s theme. That year, the gala honored the legacy of designer Elsa Schiaparelli. But Stewart’s patchwork getup seemed to draw inspiration from something entirely different. As Bustle quips, the actresses’s “avant-garde sartorial concoction was one part Raggedy Anne and two parts Flash Dance.”

Next: This outfit looked way too literal. 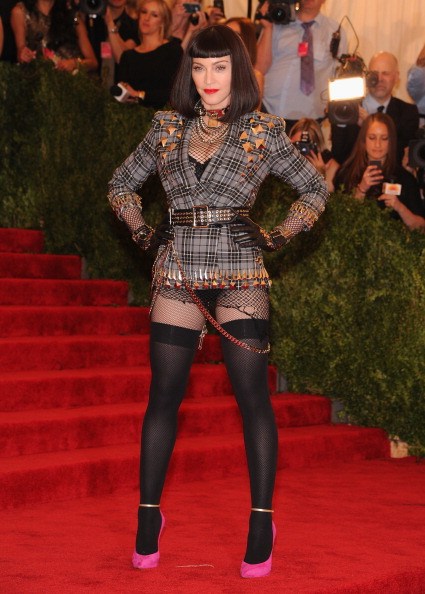 We’re not too surprised Madonna made the list more than once. | Jamie McCarthy/Getty Images for The Huffington Post

Madonna gets the dubious distinction of ending up on the worst-dressed list twice thanks to the over-the-top outfit she chose for the 2013 Met Gala. At first glance, the outfit seems like a very Madonna-esque riff on the year’s theme, “Punk: Chaos to Couture.” But as Bustle notes, “No one but Madonna could take a Met Ball theme so literally and fail quite so miserably.” The jacket, the fishnets, all the studs and chains — the look is just a little much for a black-tie event.

Next: This gown ignored the theme altogether. 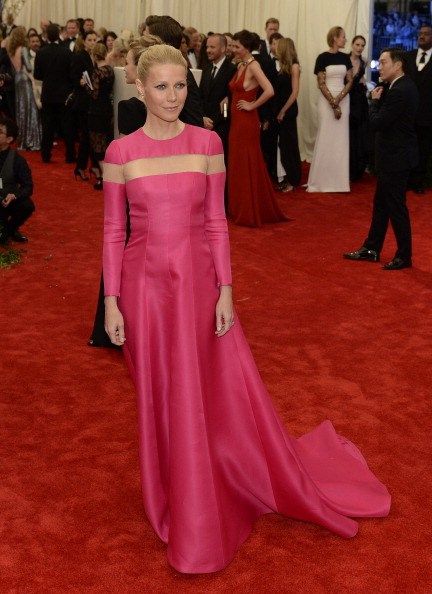 Paltrow really missed the mark on the punk theme. | Timothy A. Clary/AFP/Getty Images

The same year that Madonna got a little too enthusiastic about the Met Gala theme, Gwyneth Paltrow didn’t seem to get into it enough. There was nothing wrong with the hot pink gown that Paltrow wore to walk the red carpet — except that it had nothing to do with the chosen theme of the exhibition and the evening. As Bustle explains it, the night’s “punk theme was decidedly not reflected in such a simple, conformist frock.”

Next: This outfit was way too gaudy.

Yes, there is such a thing as too much leopard. | Dimitrios Kambouris/Getty Images

Animal print can either be very good — or very, very bad. For the 2013 Met Gala, model Coco Rocha ended up on the wrong side of a leopard with her over-the-top gown. Bustle reports that the look failed to make good use of the night’s theme, even though Rocha’s “spirit of irreverence was on-point.” But the leopard-print gown looked more gaudy than defiant, as the publication notes.

Next: This outfit looked so unflattering. 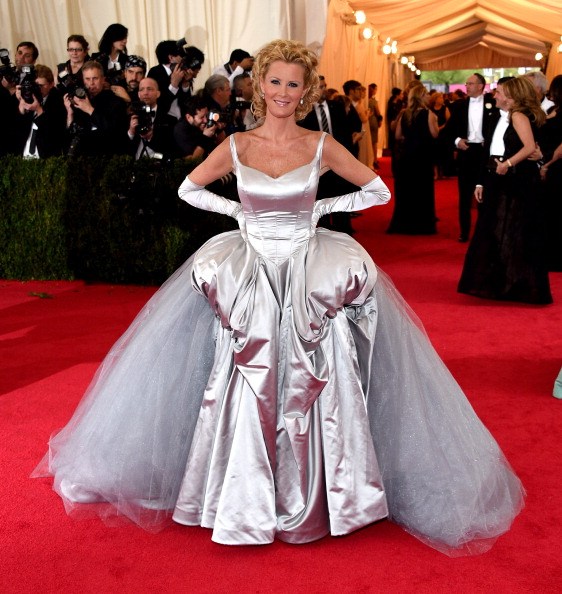 The gloves, the color, and the puffiness all make this dress a total disaster. | Larry Busacca/Getty Images

Sandra Lee, a celebrity chef, isn’t exactly known for her sense of style. And the ensemble she wore the year the Met Gala honored Charles James, the designer known as America’s first couturier, made history in a bad way. As The Cut quips, “This Franken-bridal look — complete with elbow-length gloves — might go down in history as the worst look in the history of the event.”

Next: This ensemble fell flat. 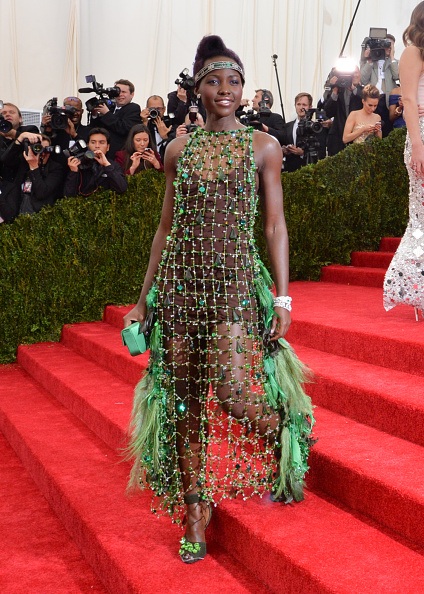 The fishnets and the feathers were just too much. | Andrew H. Walker/Getty Images

Many fashionistas think that Lupita Nyong’o can do no wrong, but the 2014 Met Gala brought about one of the actresses’s rare sartorial missteps, according to Bustle. As the publication puts it, Nyong’o’s “netted, embellished contraption certainly played with the boundaries of beauty in 2014. No ensemble should draw comparisons to a haphazardly-draped fishnet.”

Next: Jokes about this outfit made the rounds online.

The Cut characterizes the headpiece that Sarah Jessica Parker wore to the 2015 Met Gala as “the headdress that launched a thousand memes.” As Time noted, “Twitterati reacted to the Philip Treacy Custom headpiece as if it were a Rorschach inkblot test, alternately seeing the villain from Power Rangers or the villain from Maleficent or the villain from the Year Without a Santa Claus.”

Next: Everybody hated this ensemble.

Minaj didn’t leave much to the imagination in this outfit. | Dimitrios Kambouris/Getty Images

There were some statement-making ensembles on the red carpet the year the Met Gala celebrated Rei Kawakubo, the Japanese designer who founded Comme des Garçons. But not all turned heads in a good way. One example? Nicki Minaj’s outfit, which featured Kawakubo’s likeness on an otherwise very un-Comme des Garçons bodysuit-and-cape combo. The Cut puts it best when the publication reports, “Sorry, but strapping Kawakubo’s face to a bodysuit does not a tribute make.”

Next: This outfit had nothing to do with the theme.

She certainly didn’t pay attention to the theme, that’s for sure.| Dia Dipasupil/Getty Images For Entertainment Weekly

Another celebrity who just didn’t seem to understand the theme — or who didn’t have her stylists do their research — ahead of the 2017 Met Gala? Kylie Jenner. Jenner wore Versace to the evening honoring Rei Kawakubo, illustrating that she didn’t want anything to do with the theme. And the particular ensemble she chose was a little too much of everything: too embellished, too transparent, and even too confusing. As one Harpers Bazaar editor wrote, “I feel there isn’t much positive to say about this one. I don’t get it.”

Next: This outfit was just in bad taste.

Everyone was surprised by this shockingly bad outfit. | Dia Dipasupil/Getty Images For Entertainment Weekly

Bella Hadid definitely turned heads with a form-fitting catsuit at the 2017 Met Gala. But the look didn’t stand out for the right reasons. As one Harpers Bazaar writer reports, “This fitted net Alexander Wang catsuit looks like a body stocking and lacks the good taste we normally see from Bella.” An editor added, “I feel like Bella was on her way to ballet class before she realised she was supposed to be at the Met Gala, so she ripped off her tutu and hightailed it to the event.”

Read more: The Oscars: Worst Celebrity Dresses of All Time