Be they corny, crappy, or creepy, the worst opening lines on dating apps are always the ones that make you go, "Wow, I really matched with this person? Goodbye!" Coming up with the perfect opening line on a dating app is a science and an art. Yes, you’ve got to be intriguing — quirky, even if that’s your dating app vibe. But there’s a difference between being a bit offbeat or unconventional in your opening message, and straight-up uncomfortable.

If you’re not super experienced when it comes to crafting dating app openers, all you need to do is sit down and brainstorm some cute, clever things to say. Even a quick glance at a match’s profile is a good start: Ask about their city or about favorite foods, or even a "Would you rather?" type question. A nicely filled out dating app bio is literally an open book! It’s filled in with information so you can find the appropriate topics to broach with your potential f*ck buddy and/or love of your life. What you don’t do is skip over the socially acceptable realm of dating app small talk and skip straight to strange feelings, sh*tty compliments, or niche fantasies — sexual or otherwise. Here are six women on the most cringe-worthy dating app openers they’ve received. 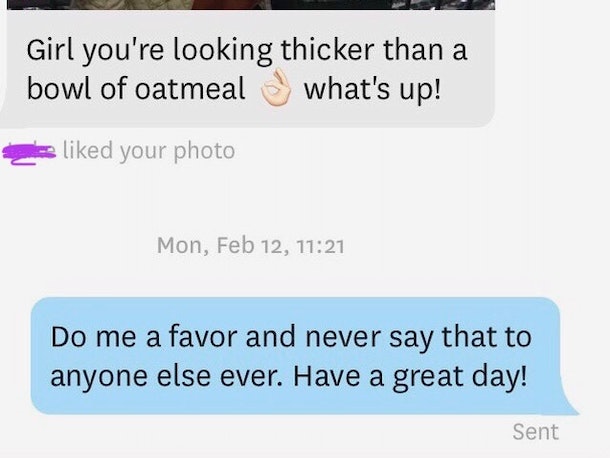 "Are you from McDonald’s? Because I’m lovin’ it."

Haley, 19, got this opener on Bumble. When asked if she had a screenshot, Haley said, "No, because I unmatched his *ss after he said he deserves my body."

The one about onions 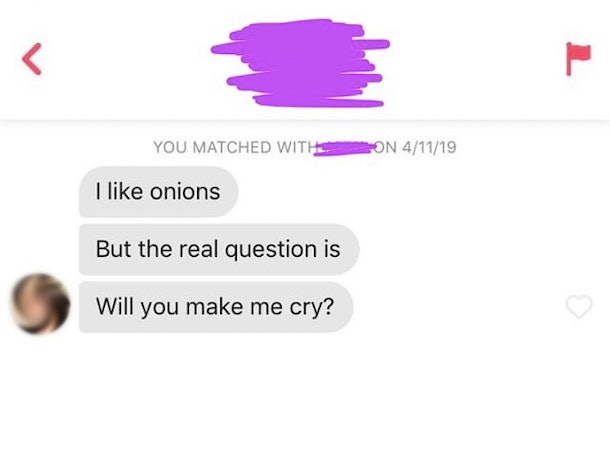 Apart from her love of indie music and rosé, Bea*, 22, did have a reference to onions in her Tinder profile. She included this cute, quippy little tidbit: "You know that part in Shrek where he said he was an onion because he had layers? Me A/F." But she never said she liked onions. And what’s up with being worried about whether your Tinder match to make you cry? 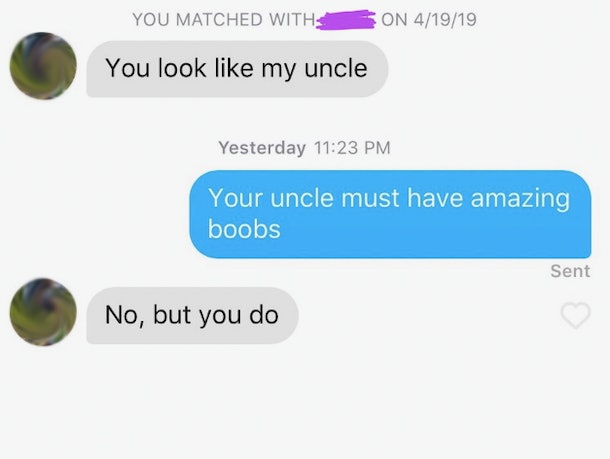 "It is dismissive and degrading to the other person and can eventually undermine their self-confidence. Usually the person doing the negging is insecure in their ability to attract [someone] without putting them down," dating coach Christine Baumgartner told Bustle.

“I want to paint you green and spank you like a disobedient avocado ? ?”

This opener Charlotte, 22, received is truly the kind of sh*t that you can’t make up. There’s so much to unpack here. Why an avocado? Why not any other fruit? Or was he really just going for a millennial food? And in that case, there’s questions about whether he has sexual desires for oat milk, charcoal ice cream cones, hot wings, or anything sprinkled with turmeric, too. "Literally, so weird," Charlotte says. 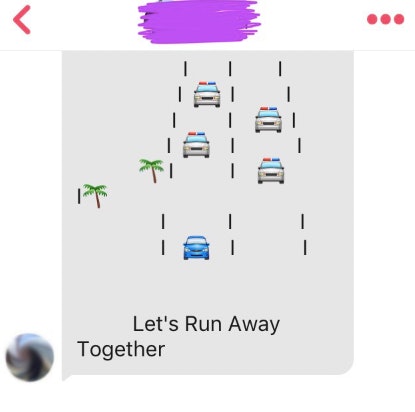 Not only did this man slide into Kathryn’s, 23, DMs with the modern-day Bonnie and Clyde visuals. He later messaged her this: "You’re [student newspaper] writer… here’s a tip. The shooting TN: cop pulled over, man (non-SU student) started a confrontation, gun fight ensured, suspect dead, cop in stable condition." Um, OK! "These may have been a few weeks apart, but the first one was awful and the second one was hilarious," Kathryn says. Either way, maybe homeboy needs to tune into a police scanner for his kicks and get off Tinder.

While weird dating app openers are few and far in-between, here’s hoping they can give you a few laughs when you encounter them — and not make you swear off dating apps for life.