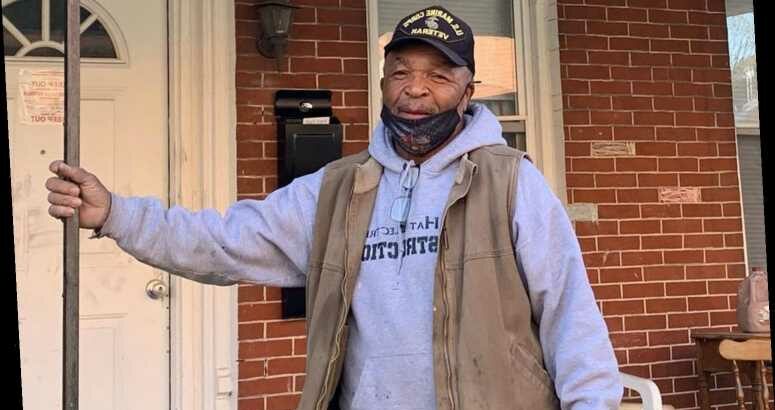 A Pennsylvania veteran is being praised as a hero after officials say he entered a burning home and pulled his neighbor from a fire.

According to authorities, the fire in Norristown broke out around 10 a.m. It wasn't long after that Johnson, 70, noticed there was smoke coming from his neighbor's home up the street.

"As he ran up Swede St, he called 911 and told them about the fire," the fire department wrote. "Then with the help of some young kids on the block, they kicked in the door and started yelling for everyone to get out." As Johnson was alerting residents to exit the burning building, he learned that someone was trapped on the second floor, officials said.

The veteran — who has lung issues, according to ABC affiliate WPVI — immediately jumped into action and entered the home, before going upstairs and finding a man in desperate need of help.

"He was on fire! I said, 'We got to get him out quick!'" Johnson recalled to the local outlet. "I drug [sic] him down the stairs, brought him outside and I'm just putting the fire out in his hair."

Once the man was safely outside, authorities used a blanket to put out the flames. He was later flown to a trauma center in Philadelphia for treatment, according to the post.

At this time, the man's condition is unknown. Though Johnson had no gear to protect him from the blaze, he told WPVI that he "wasn't worried about that."

"That doesn't phase me," he explained to the outlet. "I worried about saving a life."

The "modest" veteran also told the fire department "it was just instinct that kicked in and he did what he had to do," according to their post.

"He thanked Plymouth Community Ambulance and all the firefighters for taking care of him and making sure he was ok," fire officials wrote. "The Norristown Fire Department salutes Mr. Johnson for his service to our country and our community."

Following the incident, the fire department announced that Johnson's heroism would be recognized by the Pennsylvania municipality at an upcoming council meeting.

On Monday evening, Magistrate Judge Gregory Scott, who is also a Norristown firefighter, presented Johnson with a certificate to honor him for his selflessness and actions, WPVI reported.

"I appreciate you so much," Scott said while presenting the certificate, according to the outlet.