This may be controversial, but I’m going to say it: Hulu has just as many fantastic original series as Netflix does, but it doesn’t get nearly as much credit for them. From Mindy Kaling’s reboot of the 1994 rom-com Four Weddings and a Funeral to Mindy Kaling’s The Mindy Project — which was (thankfully) picked up by the streaming service after it was cancelled by Fox — Hulu has some awesome original programming. (And I promise it’s not all produced by Mindy Kaling — I just really like her, OK?) I’ve rounded up some Halloween 2019 couples costumes inspired by Hulu shows, so if you and bae have yet to figure up who you’re dressing up as, look no further.

If you want to have an original and applause-worthy costume, pop culture is a great place to look for inspiration. Hulu’s series may not be as well-known as Netflix’s, but these shows contain just as romantic pairings perfect for couples costumes. Whether you want to keep it simple, like Veronica Mars‘ Veronica and Luke, or go all out, like Harlots‘ Lady Fitzwilliam and Charlotte, I’ve got just the dynamic duo for you and your boo to take on this Halloween. 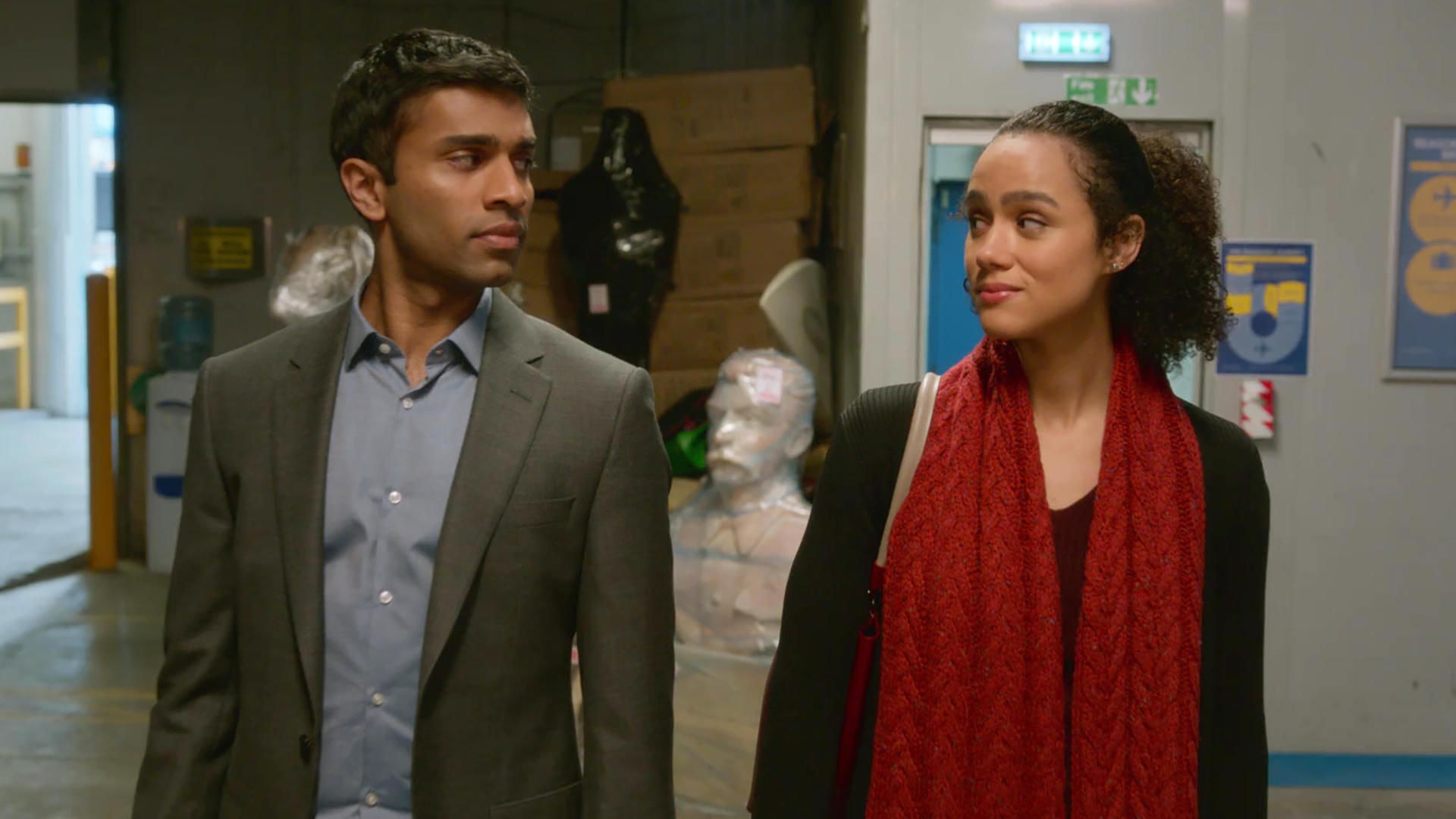 Kash and Maya spent the whole first season of this series in a will-they-won’t-they deadlock, but by the series finale, they finally ended up together, as pretty much every viewer knew they would.

Though you’re more than welcome to invest in a bridesmaid dress to take on Maya, an easier look to mimic is her outfit from the pilot episode, when she and Kash fortuitously meet at the airport. For buttoned-up Maya, you’ll need a long-sleeved black cardigan and black dress (or, if you want to go all out, the exact same Maje Rosiana Wrap Midi Dress that she’s wearing), a long red knit scarf, black tights, black heeled booties, and red lipstick.

Kash’s look far simpler — you can go with a light blue button-up and gray suit along with dark dress shoes. Both of you can also carry around baggage if you really want to play the part. 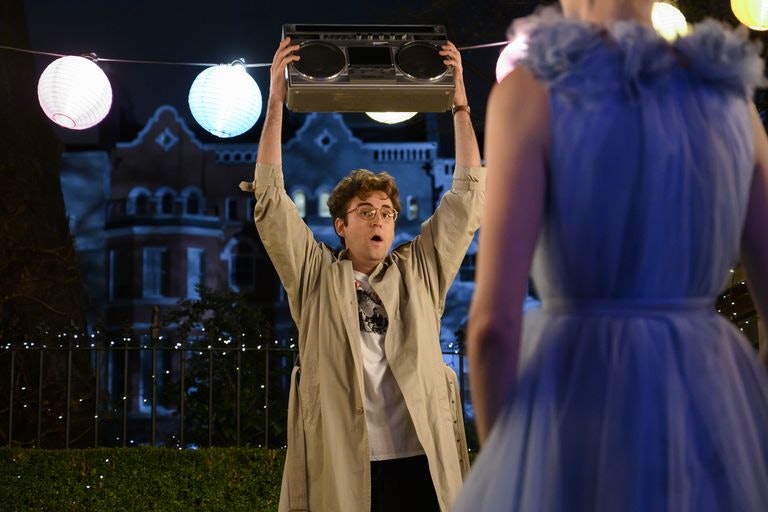 Odd couple Duffy and Gemma also didn’t get together until the very end of the season, but I, for one, and pretty pleased that they did (and that Duffy got over his 10-year-long crush on Maya).

Rather than taking on Duffy’s usual preppy, professorial look, I’d go with his Say Anything-inspired costume from Ainsley’s rom-com-themed birthday party in the pilot episode. Though his declaration of love may not have been meant for Gemma, he still looked totally cute in his long tan trench coat, white The Clash T-shirt, black jeans, and trademark round frames. Be sure to hold a boombox over your head as well.

For Gemma, you can wear something similar to her Crazy Rich Asians-inspired Cinderella-blue Marchesa dress (though considering that dress is now in a museum, it might be difficult to find something that even comes close to being as beautiful). Put your hair in a bun and wear an embellished headband to complete the elegant look. 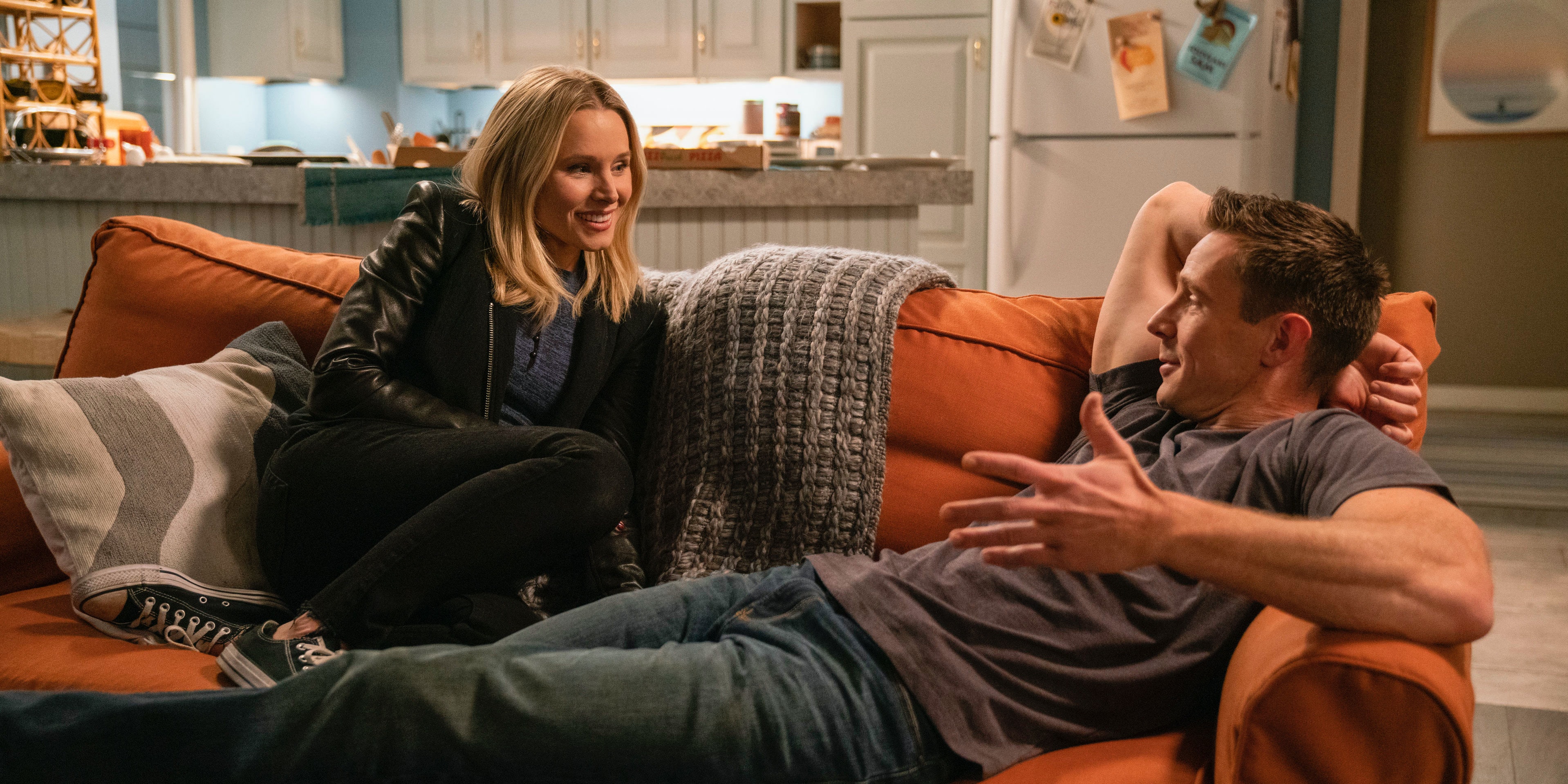 Let’s agree not to talk about the season finale of Hulu’s Veronica Mars reboot and just focus on how cute Veronica and Logan’s longtime relationship is. These two are just as predictable and comfortable with each other as their wardrobes, which makes it pretty easy to put their outfits together from clothes you already own.

To become Veronica, you just need a pair of Converse sneakers, black jeans, a leather jacket, and a huge camera to wear around your neck.

Jason’s wardrobe is annoyingly boring, but as long as you have a plain T-shirt and a pair of jeans (and stick with Veronica for the night so people know who you are), you’re in business. 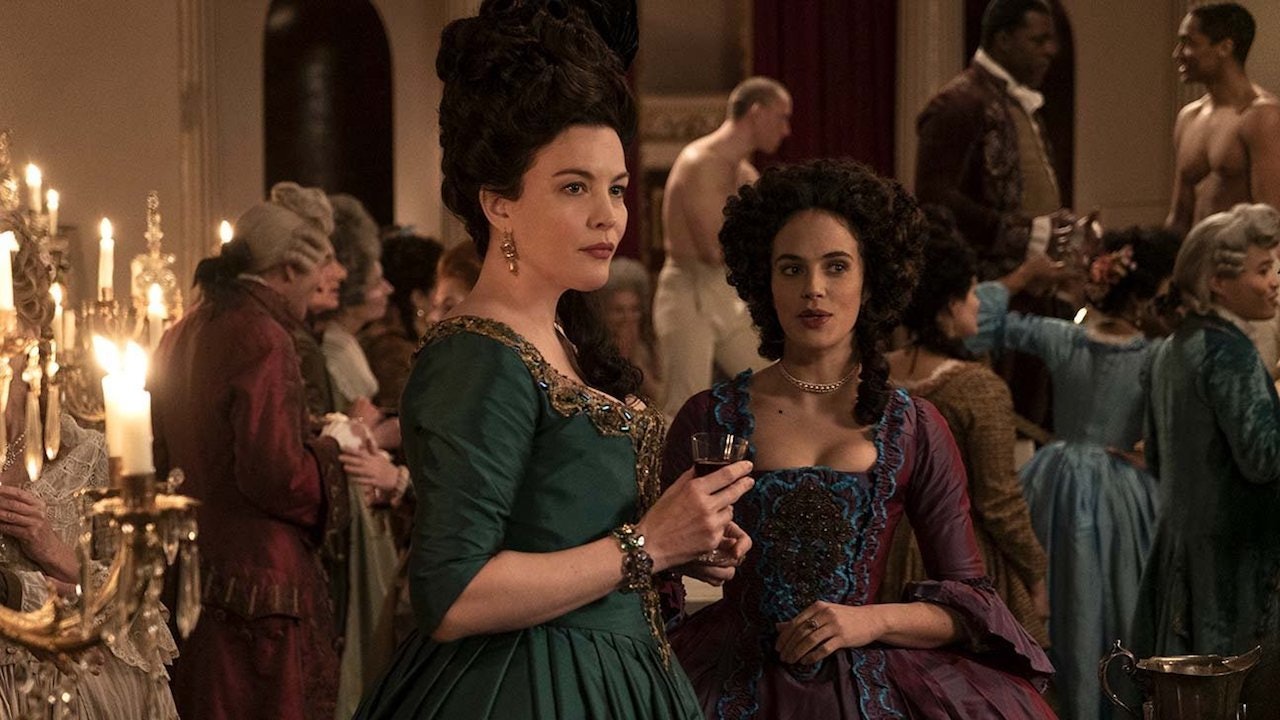 Lady Isabella Fitzwilliam and Charlotte Wells are definitely not the easiest characters to take on, but they might just be the most fun. Their sexy friendship-turned-love affair is also one of the most thrilling relationships that develops in season two of the series. 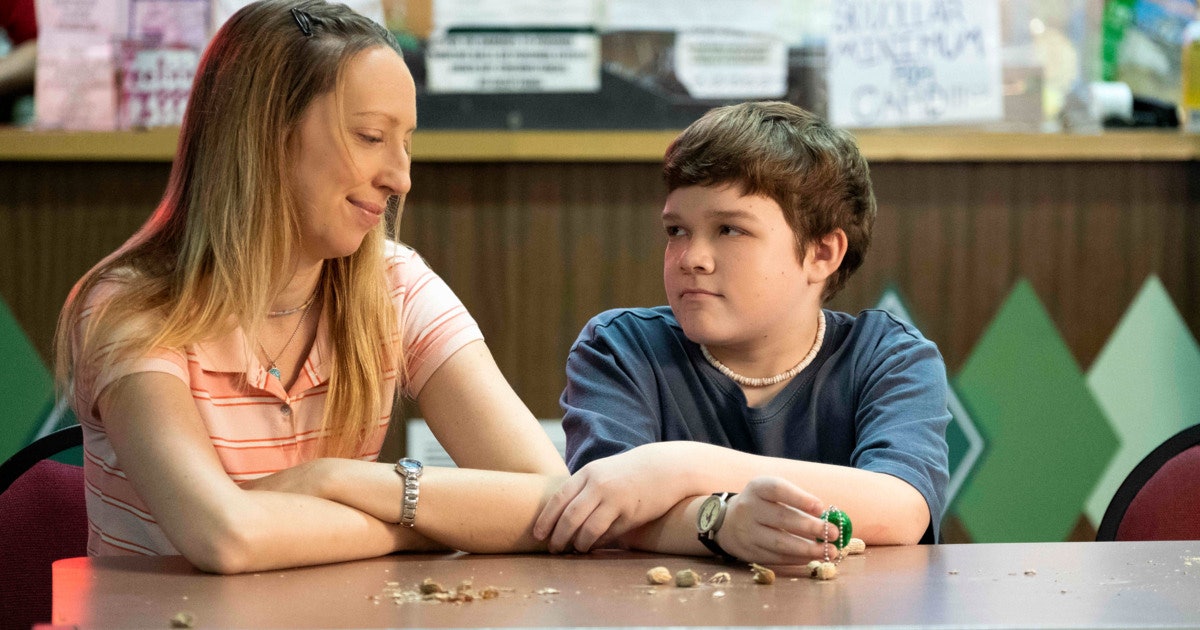 Anna Kone and her first boyfriend, Brendan, may not have worked out all too well as a couple, but dressing up as them (and taking a trip back to the year 2000) will definitely work out for you and your SO.

Anna favors striped polo shirts, khakis, a large wristwatch, and butterfly clips to hold back her hair (save for two little strands in front). Feel free to rock a whale tail if you’re feeling as bold as Anna does in the fifth episode.

For Brendan, you’ll need an oversized T-shirt, giant wristwatch, jeans, and — the most important detail — a puka shell necklace. 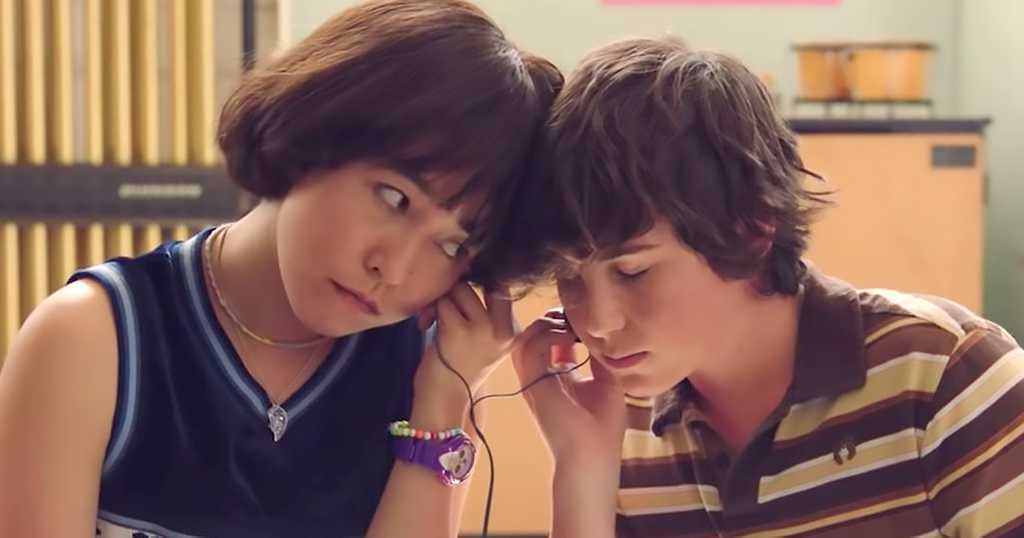 Friends-turned-maybe more-than-friends Maya Ishii-Peters and Sam are just as fun (and hilariously awkward) a couple to take on as Anna and Brendan.

Like Anna, Maya is a stereotypical 2000s tween who loves thick-strapped tank tops, choker necklaces, cargo pants, and her purple plastic watch. Maya’s most distinctive feature, of course, is the bowl-cut that she reluctantly receives from her mother on the first day of seventh grade, so you’ll need to get a bowl-cut wig if you’re really going to commit.

For Sam, you’ll want to wear an oversized polo shirt and jeans and make sure your skater-boy hair is artfully tousled. 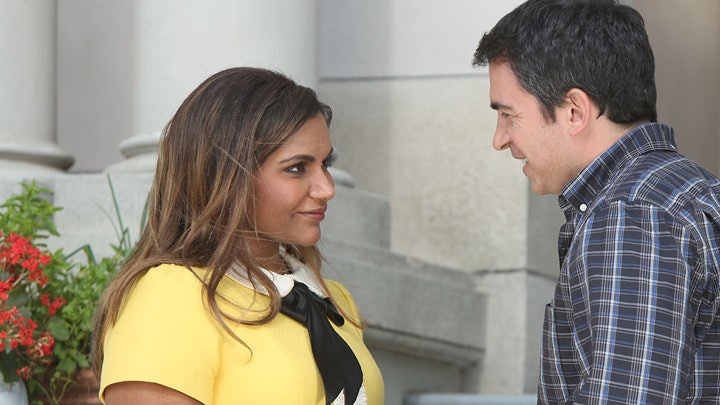 Say what you will about Mindy Lahiri and Danny Castellano, but they were always an end-game couple for me (and who can ever forget that epic striptease from season three?).

When she’s not in white coat, super-girly Mindy is all about bright colors, wild prints, and bow-tie blouses. Though all of her looks are iconic, her yellow Madeline-esque dress with the white collar and black bow may be one of her best looks, and it’s easy enough to recreate.

Danny usually sticks to plaid button-ups tucked into jeans, but if you really want to get his look, you should rock his little red reading glasses as well. 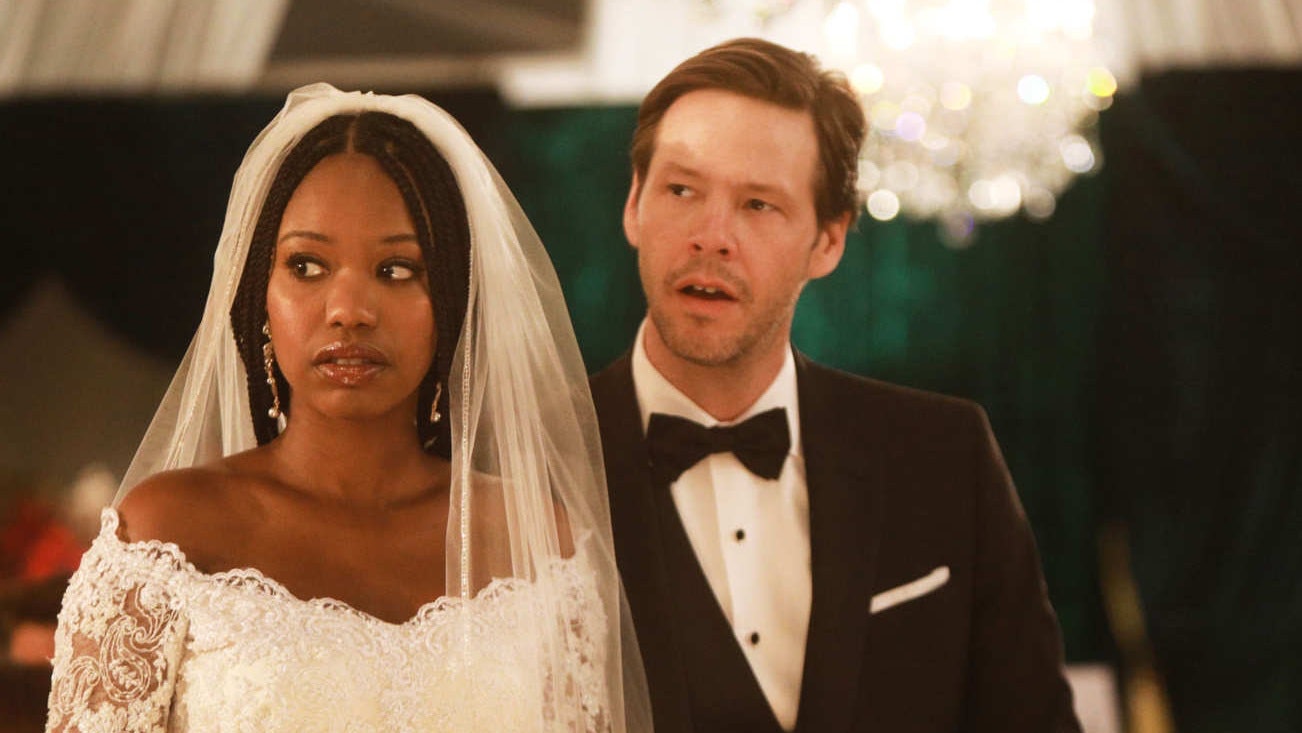 Another strangely satisfying odd couple: Morgan Tookers and Tamra Webb, who worked alongside each other as nurses and dated on-and-off-again before eventually tying the knot.

Though these two are usually in their scrubs (bright pink or blue for Tamra and green for Morgan), you can also take on take on their stunning wedding looks. You might want to add a neck brace for Morgan, because when is he not wearing one?

So go ahead and start planning! If you need me, I’ll be trying to hunt down the perfect puka shell necklace for my PEN15 costume.