Brian and I met on July 2, 2016, at a bar in the Hamptons. He had a house there with his friends all summer; I was there with my friends for my birthday weekend. Most of the details are foggy but here’s the TL;DR: He introduced himself, I made an inappropriate joke that I’ll leave out in case my mom reads this, he decided to borrow my friend’s ring to stage a fake "proposal" to me in the middle of the bar. Now, I’ve had a body language expert analyze photos of me and my boyfriend, from the day we met at that bar in the Hamptons to the time he helped me reapply fake eyelashes at my friend’s wedding last month.

You see, I would never remember the exact day we met if it weren’t for the fact that he decided to propose to me in the middle of the bar. Because he decided to be so extra (let’s call it what it is), he got the attention of all my friends and we wound up on everyone’s Snapchat Stories. Most of those photos disappeared after 24 hours but one friend saved the picture. As a result, I’ve got one fateful photo from the day we met, back when I just thought he’d be some random guy I flirted with at a bar once. Since then, things have obviously changed.

But don’t get me wrong. They didn’t change overnight. First, there was the day we drunkenly met at the bar in the Hamptons. Then, he called and texted me every day the rest of our time out there until I agreed to go out with him in the city. I would wake up to voicemails from this virtual stranger saying, "Hey, babe? What’s our plan for today?" I thought it was hilarious so I agreed to a date when we got back. The first date was a legendary one that sparked our "casually dating" phase that lasted a few months. Casually dating eventually turned into exclusively dating, which eventually turned into officially dating, and now, here we are, more than two years later in what most would call a Very Serious relationship.

I know what was going through my head throughout these many phases, but I was curious to see how much of these thoughts and feelings were being conveyed through my body language. So I asked Traci Brown, body language expert and author of Persuasion Point to analyze images of my boyfriend and I over the years and, oh, man, she truly could not have been more on point.

Outside of the dates and the basic gist of where we were and what was going on, I tried to give Brown minimal background on what was happening within our relationship during each picture. So, read along and know she was able to do these super accurate readings without much backstory. 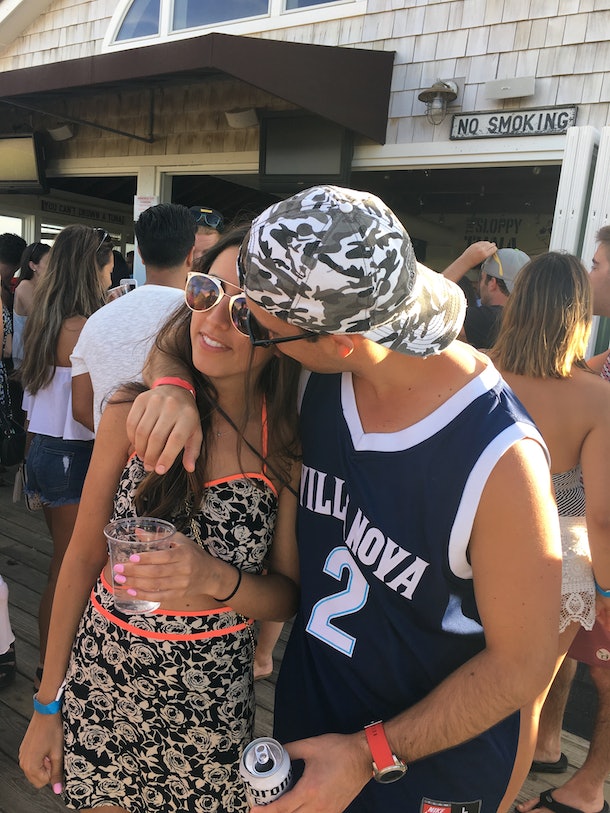 This is that one fateful photo taken on the day we met at the bar (shoutout to the Sloppy Tuna).

"Wow! This is the first time you met?! He was really into you then," Brown notes, not knowing that he literally dropped down on one knee and asked for my hand in marriage in front of all our friends just seconds before this was taken. "He got in your intimate zone right away (that’s super close to your face) so he’s lucky he didn’t scare you off doing that. And he’s showing a little control, pulling you in." 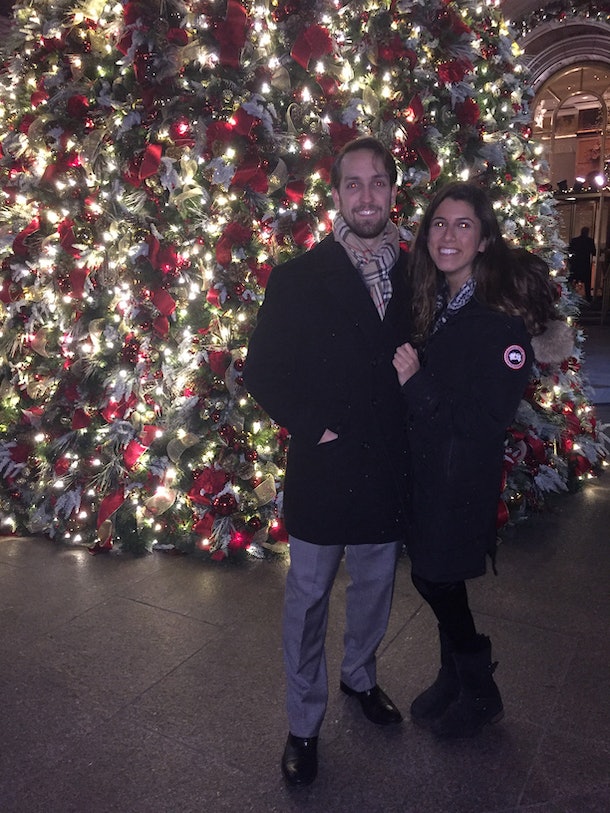 This was our first holiday season together, shortly after we started ~officially~ dating. My friend took this photo of us outside of The Palace Hotel in New York City (where Serena lived, for any true Gossip Girl fans out there). I’m pretty sure we had just said "I love you" for the first time a few weeks back.

"Both of you seem really happy here," Brown says. "Your shoulders are in a nice V-shape, so you’re both kinda pointed toward each other. And your hand is on his chest a bit. I can’t tell if it’s in a fist or not. It could be from the cold or there could be a little tension from you."

This was my first real relationship. I spent the first 23 years of my life before meeting Brian being very happily single, so the whole being-in-a-relationship-taking-cute-pics-by-Christmas-trees thing was very new for me. I remember he took me and my friend, Courtney, for a tour of all of his favorite Christmas-y spots in the city (neither Courtney nor myself are from NYC, but he is). When we got to this tree, someone suggested a picture should be taken. I don’t remember who. It honestly might have been me for all I know.

But as soon as Courtney started taking our picture, I remember not knowing what to do with my body. Pictures in general are awkward for me. Couple pictures were a whole new territory. I remember mentally trying to remember what people looked like in all of the other holiday-themed couples’ pics clogging my Insta feed and trying to mimic what those girlfriends looked like in their pictures.

So, honestly, the fact that I don’t look like a totally awkward mess is shocking. The fact that my hand might have been balled into a fist out of nervousness? Not so much. 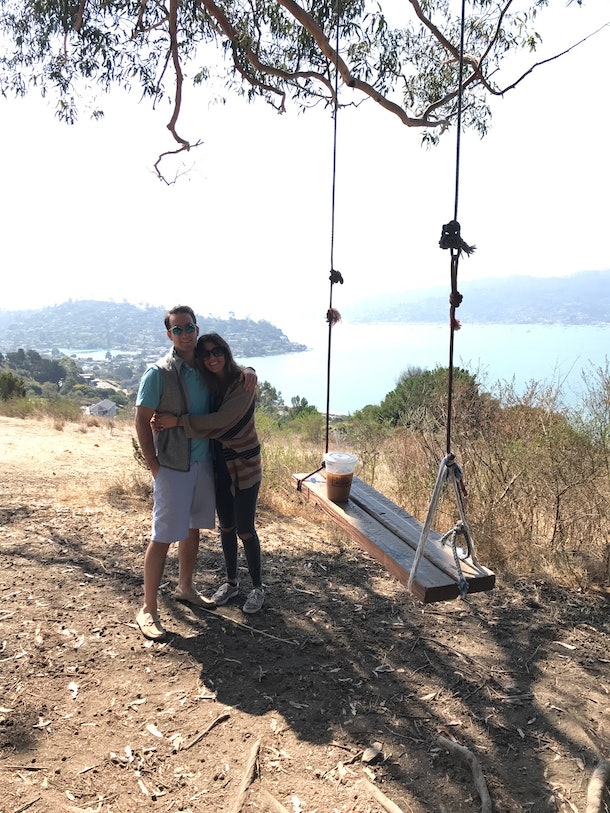 This picture was taken the first time Brian came to visit my family in the Bay Area. My nephew, Oliver, took this picture of us at "The Hippie Tree" a few blocks away from my mom’s house.

"This is the first time we see you really commit to an embrace with him! You might have made him a bit nervous because his hand is in his pocket," Brown says. "You’re leaning in with your head almost resting on his shoulder. Cute."

Yes! I was finally getting the hang of the taking-couples-pictures-without-feeling-totally-awkward thing. As for him being nervous, he most definitely was a little bit nervous considering it was his first time meeting my (very large and intimidating) family. 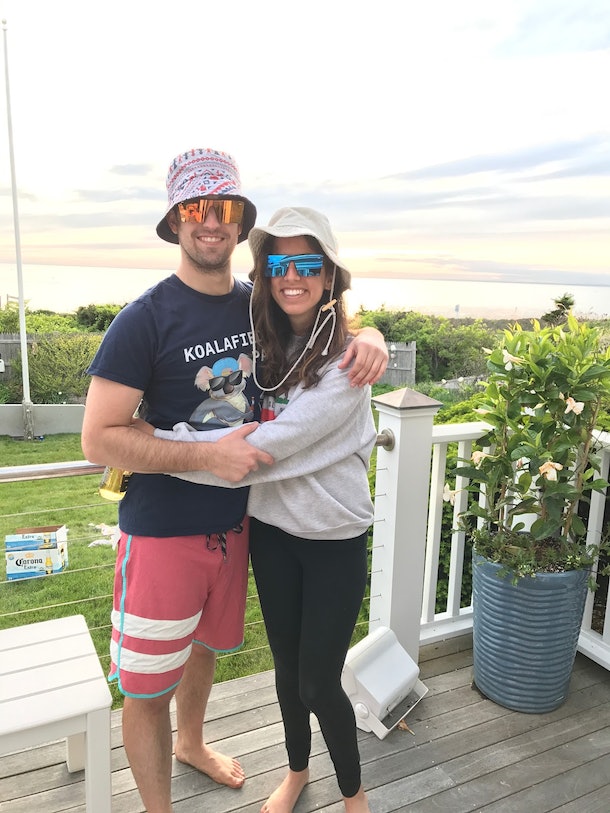 This photo was taken Memorial Day Weekend at my best friend Nora’s house in Cape Cod with all of our friends. It was the first time our friends got some quality hang time in.

"We finally get you two in a full embrace! Seems like you’re progressing nicely," Brown says. "They say couples who stay together for a long time start to look like each other. You’ve got a good start on that with the sunglasses. Ha!"

Our friends mean the world to both of us, and this weekend was the first time they all really got to get some quality time in together. Also, we’re both obsessed with bucket hats so we wore those, and Brian surprised me with those ridiculous matching glasses. So, yeah, I was literally on Cloud 9 all weekend. Not surprising that it was our first "full embrace." 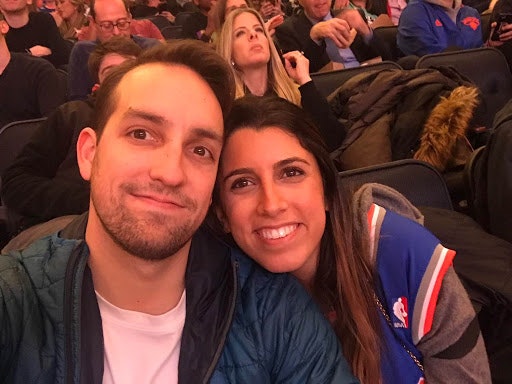 For Christmas last year, Brian’s brother got him two tickets to the Knicks/Celtics game at Madison Square Garden. He brought me despite the fact that I’m a Warriors fan who honestly knows little to nothing about sports. This could have been because all of his friends were busy, but I choose to think it’s because I’m so fun to hang out with.

"You two are getting tighter as time goes on! He’s not quite as happy here," Brown notices. "His mouth isn’t open as he smiles but that could be because he’s focused on taking just the right picture."

I’ll go ahead and chalk up his unhappiness to the Knicks losing. 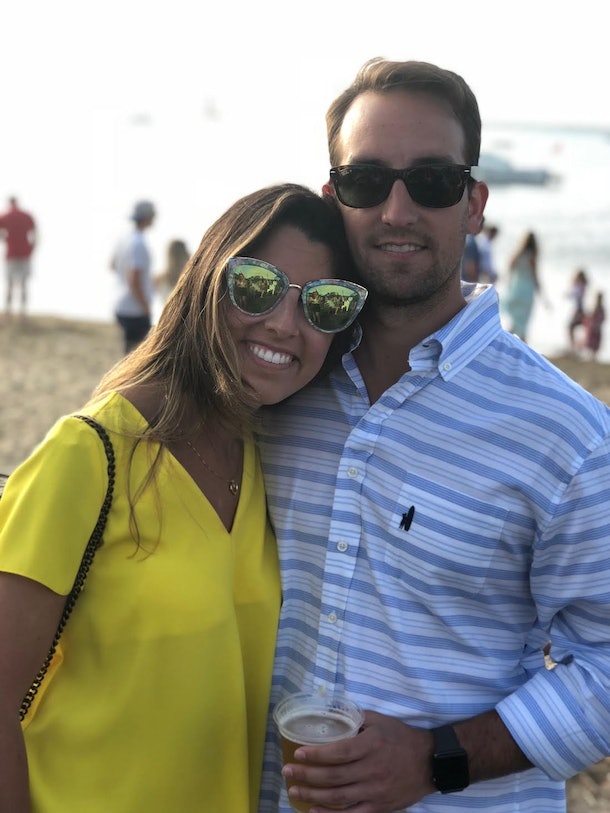 This was taken at my most recent birthday at dinner with him and all of my friends, almost exactly two years after the day we met.

"You really like to lean on his chest," she noted. "That’s cute! I think he likes being the guy you depend on."

I would hope he likes to be the guy I depend on because, well, I do depend on him a lot. I also have to admit the leaning on his chest thing is something I hate that I do in pictures. My mom regularly critiques me on it, so I’m glad a certified body language expert actually thinks it’s "cute." Take that, Mom! 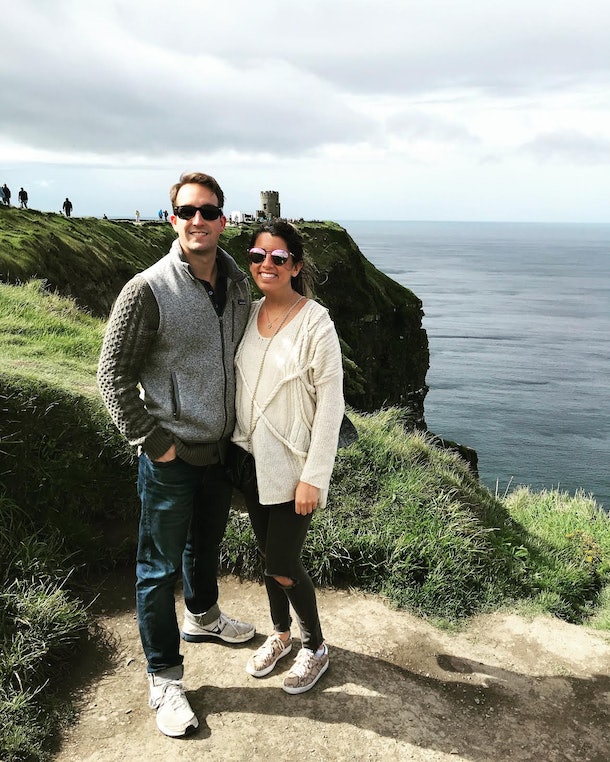 This past Labor Day, Brian and I went to Ireland on our first trip out of the country together. Here we are doing the standard standing on the Cliffs of Moher pic.

We may have been in a different country but, according to Brown, not much changed for us outside of U.S. borders.

"Seems like you two have some consistency going for you," she said. "The way you’re standing matches lots of your other pictures!" 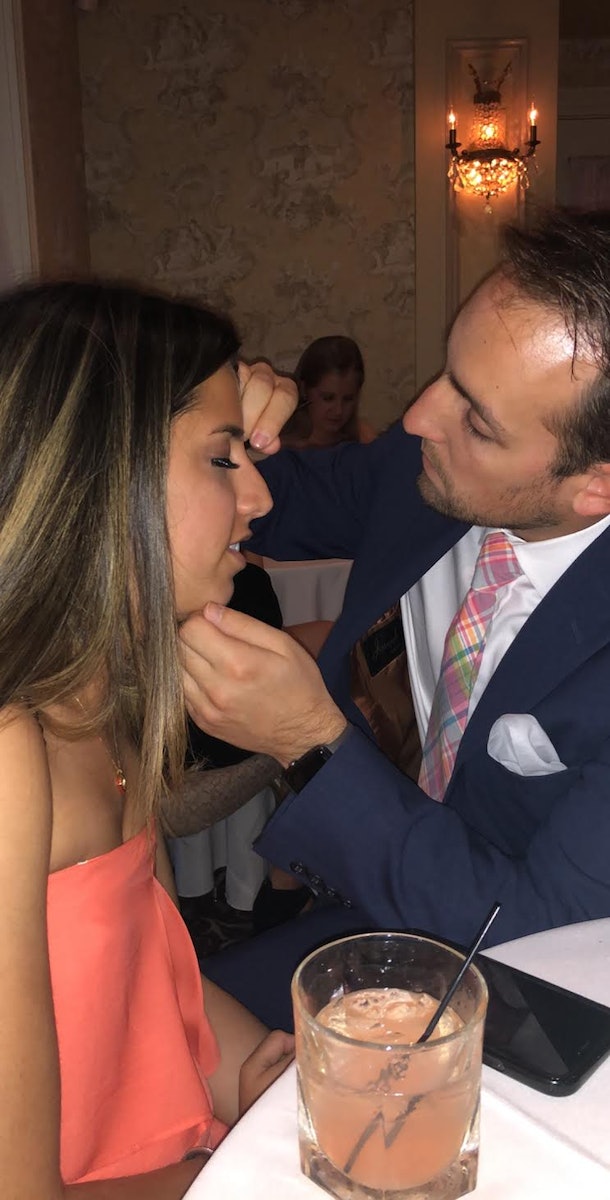 Here’s our most recent (and my personal favorite) picture of us together: Brian reapplying my fake eyelashes at my friend Kate’s wedding.

"It takes a real man to figure out how fake eyelashes work," Brown jokes. "This is really cute. Look how much trust you have in him without even looking! And that he cares enough to do it. I’d say you two are a match made in heaven."

I hate this picture of myself and, if I’m being completely honest, we have a lot much more aesthetically pleasing couple pictures from this night with my false lashes perfectly intact. But, alas, this one is still my favorite. Our relationship has changed a lot since the day we drunkenly met out in the Hamptons and I feel like no image better captures where we are at this particular juncture than this one.

I’m a big believer in actions speaking louder than words and I think this picture says a lot about the way in which I’m lucky enough to be loved. As Brown says, I trust him to glue on my fake eyelashes in the middle of a wedding reception, and he loves me enough to do it.

Needless to say, there are more grand photographic examples of our love I could’ve drawn from. But I like this one better.