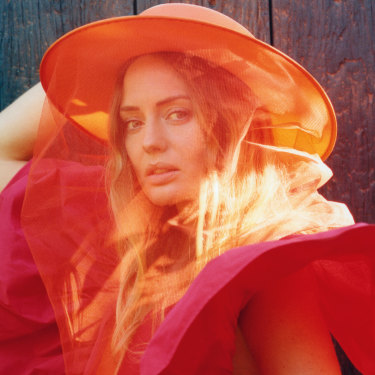 The day London emerged from lockdown, Haddock received the call to tell her she had been cast in Downton Abbey: A New Era. Credit:Willow Williams

It’s a date that is glued in actor Laura Haddock’s mind: March 8, 2021. Not only was it International Women’s Day, but it was the day London broke free from a winter-long COVID-19 lockdown. Like parents all around the globe, Laura had faced the challenges of remote learning – in her case with her two children, Pip, 6, and Margot, 4, whom she shares with her ex-husband, actor Sam Claflin – and was relieved to be finally taking them back to school.

“I was walking them across Kew Bridge in west London to their school and dropping them off for the first time in months,” she recalls, over a Zoom call from the UK. “It was a springy day in London, really beautiful weather. And I remember feeling the elation of sharing this moment with the other parents, of being like, ‘Oh my god, we bloody made it. Yeah, we made it and they’re all right. And we’re going to be fine.’ We all celebrated this moment like fierce, gentle warrior women.” 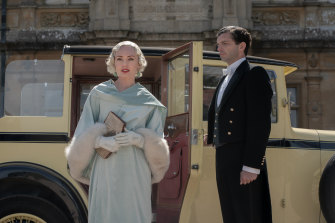 To top off her morning, as Laura enjoyed her walk back across the bridge to her home, she received a phone call from her agent telling her that director Simon Curtis wanted to talk to her about an upcoming film, Downton Abbey: A New Era.

“It was a moment for me that I will always remember,” the 36-year-old says. “When you first start your career, you celebrate every single job. I mean, really, really celebrate it. You’re like, ‘Yeah!’ You get an adrenalin rush and you sort of fist pump the sky. You might go out and have a drink with your mates to really celebrate it.”

“But there’s something that happens where you forget, you forget how amazing it is to book a job in this game. Because it becomes your career, and you’re moving through it in slightly different ways from when you first started when it was everything.”

For Haddock, the pandemic served as a reminder of how important it is to never get complacent.

Laura says the pandemic took her back to the shaky feelings she experienced when she started out in the industry, having left school at the age of 17 and moved from Hertfordshire to London to study drama before landing small roles in British TV series such as My Family and The Palace. The pandemic served as a reminder of how important it is to never get complacent.

“One year can look really successful and the next year can be really quiet. It’s a really, really turbulent career choice. And having that time when we couldn’t work, we couldn’t create anything, we couldn’t tell a story, we couldn’t do anything. It was a very, very strange, sobering time.” She pauses. “Actually I don’t know about sobriety, so much,” she adds, laughing. 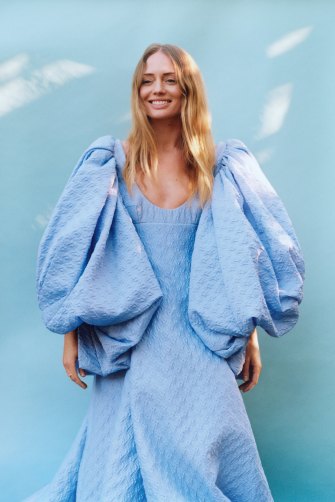 That phone call on March 8 led to Laura being offered the role of Myrna Dalgleish in the sequel to the first Downton Abbey film, which itself followed on from the hit TV series.

As a huge fan of the award-winning period drama, Laura was relieved to land the role for one other reason. “It’s always tricky when you get sent a script, and you’re like, ‘Oh no, I’m going to know what’s going on.’ So you’ve got your fingers crossed that it’ll work out because otherwise you’ve ruined it for yourself.

“That happened with [BBC drama] Luther. I got an audition for it, and I had a really serious conversation with my agent. I was like, ‘No, I’m a massive punter. I’m a big fan of this show. So if I don’t get it, then I’m going to be really annoyed.’ So you do everything that you can to get a job just so you don’t ruin it for yourself!” And yes, she landed that role, too.

With spoilers in mind, Laura is hesitant to reveal too many details about her character Myrna in Downton Abbey: A New Era, but it can be revealed that she plays a silent-movie star, all platinum-blonde hair and vintage Hollywood glamour. Sitting with the rest of the cast in their muted brown garb on the promotional poster, Myrna shines in a pale-mint dress and bright red lips – a visual hint to viewers of what to expect.

“In terms of the film and the characters that are already so well established, Myrna Dalgleish comes in and just stirs the pot,” says Laura. “She’s a very, very different energy, a very different character to anybody else in the film. She’s a bit of an anomaly. She just bowls in with unapologetic energy.”

It’s not often an actor performs the role of an actor, and although Myrna’s diva-like qualities feel far removed from Laura’s own off-screen personality, she found a way to relate to her.

“If your character does something that you personally wouldn’t do, then there’s this sticky point where there just has to be some forgiveness.”

“I really enjoyed connecting to this character on multiple different levels, one of which was having empathy and recognition for her,” Laura says. “You should always exist in a world where, if your character does something that you personally wouldn’t do, then there’s this sticky point where there just has to be some forgiveness.

“I always have to find the things I love. I get obsessed about the women I play. Myrna’s a complete diva. But there are things that she’s massively insecure about. That insecurity presents itself sometimes in a way that can come across as diva-ish or demanding but it’s all about her insecurities.”

Without giving too much away, Myrna’s most distinctive trait is,
well, best suited to silent films. But it’s the aspect of the character that Laura most enjoyed leaning into.

“One thing I am realising as an actress is that I love doing accents,” Laura says, having recently adopted a northern English accent in the lead role as Zoe Walker in the Netflix hit White Lines.

“I’ve been doing accents ever since I was a kid. It’s just helpful that I’ve got a job I can use it in, because I don’t know where else it would be useful!”

But Laura has found another use for her special skill: it brings added fun to bedtime story sessions with her two children. “Do you know the Curious George books?” she asks. “So, there’s one about Curious George going to a toy shop. There are loads of kids in the toy shop, and they’re all asking George to get them all these toys. So I gave all the kids different accents. One of the kids, I’d given him a northern accent – quite a thick Yorkshire accent.

“I heard my six-year-old the other day reading the book to my four-year-old, and he did the accents that I do for the characters in this particular book. He even did the little boy in the northern accent! And he’s pretty spot on with it.”

Could this be a sign of a future in the entertainment industry or simply a bit of fun? Laura suggests it could mean something else entirely. “We’ve spent quite a lot of time in America, and it’s very interesting to me how quickly they start to imitate. It must be a sign of huge empathy. It’s quite emotionally elevated for a six- and a four-year-old to be very quickly using the same accent as the person they’re talking to.

“Yes, maybe it’s just a fun thing, but it’s a way of making the person they’re talking to feel comfortable,” she adds, before the interview comes to an end and she says goodbye – with just a hint of an Aussie twang.

Downton Abbey: A New Era opens in cinemas on April 28.