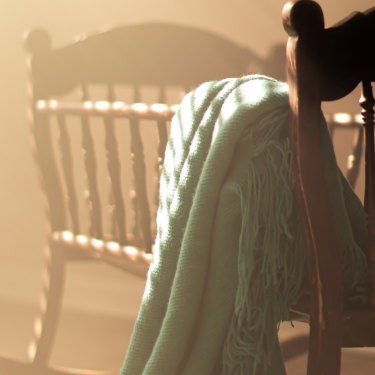 Paul Dunne’s experience as a podcaster, listening to others tell their stories of family dysfunction, had taught him that family secrets are always started to protect someone.Credit:Getty Images

I was born in 1965, the last of Mum and Dad’s brood of children. Years before, my brother Stephen had died in an accident in the kitchen of our home. Although his death was never discussed, he was also never forgotten.

“You’re one of 11,” Mum would correct me whenever I failed to acknowledge the sibling I’d never met. “You have four sisters and six brothers.”

It seemed a finicky detail for a woman who’d failed to remember my correct date of birth for the first dozen years of my life, an error that was only rectified after checking my birth certificate in advance of my confirmation. The fact that the date change (from February 19 to 21) also changed my star sign (from Aquarius to Pisces) was, apparently, inconsequential, Mum maintaining I was just lucky (unlike Stephen, presumably) to have a birthday to celebrate.

So yes, Stephen always counted in our household tally. But as it turns out, my birthday wasn’t the only family detail Mum had failed to accurately recall. What do they say about hindsight being 20/20? This was certainly true for me 18 months ago as I began recording a podcast about other people’s bizarre family stories.

As part of the project, I began documenting my own. Telephoning my siblings one by one, I recorded the stories I’d grown up hearing: Dad swindling his employer and losing company money at the racetrack; Michael being shot at in Goondiwindi by a gun-toting neighbour as he retrieved a stray cricket ball; Damian, the second-youngest, born prematurely, being placed in the fridge to cool him from the blistering Queensland summer.

But along with the many amusing tales I heard retold, there were also stories of hardship and sorrow, most notably the death of Stephen one early autumn day in 1951. Since Mum and Dad rarely spoke of the tragedy, the details my nine elder siblings shared were scant but consistent.

At the time of Stephen’s accident, Mum was in the backyard of the family home at Cringila, a suburb of Wollongong. While unsupervised in the kitchen, Stephen pulled the cord attached to a kettle, pouring boiling water over himself. He died later that night in hospital. But there was one key detail new to me: Stephen’s accident happened when he was just seven months old, while he was still in his bassinet.

In the 1970s, on the one occasion when I’d had the adolescent insensitivity to ask Mum about the accident, she had led me to believe Stephen was two when he died. Granted, Mum wasn’t a stickler for birth dates, but this anomaly struck me as more than an administrative error. It felt like a deception. But why?

I went into full Poirot mode to uncover the truth. And although “Death in Cringila” didn’t have quite the same je ne sais quoi as Murder on the Orient Express, it became every bit the page-turner.

My experience as a podcaster, listening to others tell their stories of family dysfunction, had taught me a couple of important lessons: one, never request a DNA test unless you’re prepared to accept your cousin as your father, and two, family secrets are always started to protect someone. Mum had led me to the assumption that Stephen was a toddler to make the circumstances of his death more believable: she had wanted to shut down the conversation and avoid any follow-up questions.

But her revisionist version of events didn’t make sense. It didn’t exonerate her, so who was it designed to protect? 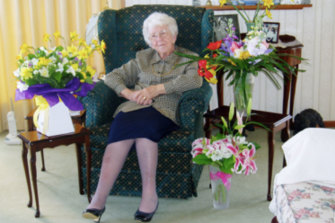 The writer’s mother on her 80th birthday. She took the details of her son Stephen’s passing to her grave.Credit:Courtesy of Paul Dunne

At the time Mum was so deftly deflecting my line of questioning, Agatha Christie was my favourite author. Now, 40 years later, I went into full Poirot mode to uncover the truth. And although “Death in Cringila” didn’t have quite the same je ne sais quoi as Murder on the Orient Express, it became every bit the page-turner as I spent hours scouring digitised copies of The Illawarra Mercury for clues.

But a super sleuth with forensic focus I am not, and there were red herrings aplenty in the papers of the day. Among the folksy advertisements for “NEW!” Neapolitan ice-cream and bus trips to the Sutherland Shire, I found
myself constantly sidetracked by stories of communists and the Country Women’s Association – although, sadly, never in the same article.

The headline “Baby Fatally Scalded” from Wednesday, April 11, 1951 jolted me back to reality. The short, front-page item confirmed my brother’s age, but gave no clue as to Mum’s later distortion. However, my obsession with the Menzies-era Mercury had revealed that the coroner’s court reporter was a regular contributor.

So I continued my search until the inevitable follow-up piece appeared on June 1. Reading the article, “Baby’s Death Due To Shock After Scalding” was like witnessing a collision – the point where one version of history ricochets off another. “Anthony,” it read, “had inadvertently pushed the bassinet nearer the bench and the baby had caught hold of the cord of the kettle.”

My Poirot moment had arrived. Anthony, my second-eldest and perhaps most-loved brother, had played a hand in the death of our baby sibling. Being only four at the time, he had no recollection of the event and, naturally, no blame had ever been attributed to him. 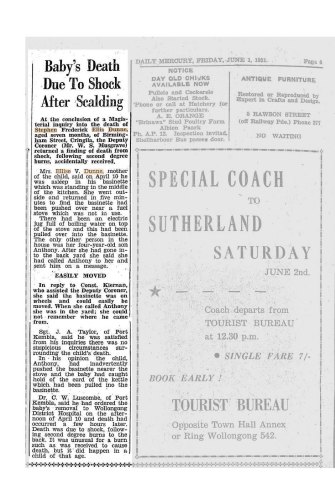 One of the newspaper articles from 1951 that helped Dunne uncover the truth.Credit:Courtesy of Paul Dunne

Mum blamed no one but herself, and her testimony, so dispassionately cited in the newspaper article, must have been a brutal underscore to the trauma she’d already endured. It was no wonder she concealed these details to her death in 2006, aged 82; silence could never bring Stephen back, but it could protect the other innocent victim.

But uncovering such a closely guarded secret brought with it a burden I’d naively failed to anticipate: now that I knew, what was I to do with the information?

“Hey, if you’d accidentally killed your brother, would you want to be told?” I didn’t know how I could ever possibly ask this question without revealing my hand and depriving Anthony of the choice. But after weeks of contemplation, I decided a family reunion was the best place to start.

Now family gatherings are not our thing. Our last had been held in Ballina, in northern NSW, over Christmas in 1974. Coincidentally, it was the same time Cyclone Tracy hit Darwin, and the jury’s out on which event was more catastrophic. But time had eroded many of the sharp edges from various relationships and, where once our family comprised more factions than the ALP, we were now more akin to a semi-functioning coalition.

Exploiting the mellowness, I made my proposal: let’s gather for a siblings-only weekend in Goondiwindi, the only place where we had all once lived. Almost immediately, the RSVPs came flooding in and a date was agreed: May 2021. A sizeable Airbnb was booked and the Dunne clan descended on the unsuspecting outback town on the Queensland/NSW border.

Time had eroded many of the sharp edges from various relationships and, where once our family comprised more factions than the ALP, we were now more akin to a semi-functioning coalition.

In readiness, I’d set an itinerary designed to stoke memories and provoke conversation, with a trivia quiz after dinner on Friday setting the tone. Passing around a tin of prepared questions about our childhood adventures – and no, “Guess who killed Stephen?” wasn’t one of them – we were all soon revelling in nostalgia, our present-day selves all but forgotten. We were just kids once again, gathered around the family table. 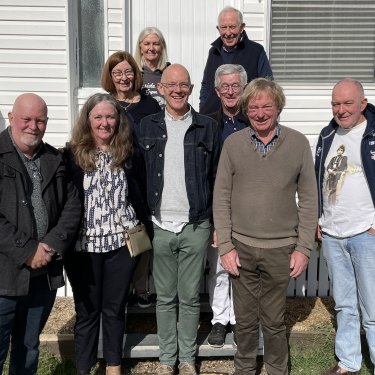 The Dunne siblings reunited, including Paul (centre), and Anthony next to him (right).Credit:Courtesy of Paul Dunne

We spent Saturday at the Gunsynd Park racetrack for Dad, Sunday morning at
St Mary’s Church for Mum. We were treated to a guided tour of St Mary’s Primary School, visited our old family home, and placed a plaque (guerrilla-style) at the Goondiwindi Memorial Pool, renaming it after our father who had conducted illegal gambling nights to raise funds for its construction in the 1960s.

By Sunday night, we had recounted every hilarious family fable from 1945 to 1980, and the topics grew more sombre. Finally, over a roast-pork dinner that could have been conjured by our dead mother, I had the opportunity to unobtrusively raise the subject of Stephen’s death and the silence surrounding it. And then, almost as if on cue, Anthony wondered aloud if he’d had anything to do with our brother’s accident.

“Would you want to know if you had?” I asked, seemingly without intent. Here I was, finally posing the question I’d orchestrated this elaborate excursion just to ask. In my imagination, this was Anthony’s moment to display a furrowed brow and contemplative chin-stroke.

But his response was immediate and decisive. “Wouldn’t make any difference,” he said. “I was four years old.”

Had I been an impartial therapist, I think I’d have been pleased with how he’d processed the possibility. But I was his brother who’d placed great emphasis on this moment. Would it kill him to feign a bit of soul-searching? I’d never intended to tell Anthony over the weekend what I’d discovered but, right then, I was tempted to treat him to a dinnertime denouement.

But then something else happened I’d never anticipated. Thanks to the blissful time we’d all shared, Anthony’s response to the Big Question wasn’t so much anticlimactic as irrelevant. The circumstances of Stephen’s death, taken by our parents to their graves, suddenly seemed superfluous. Far from a reunion to redefine the past, our gathering had morphed into something more meaningful. It had served to remind us vividly of the joy that had dominated our childhoods and helped us create a new memory to add to the family mythology, decades after the last memories were made.

The plains of western Queensland are flat and endless, with a grand cinematic scope. Driving out of Goondiwindi the following day, the credits rolling through my mind, I thought of the recorded conversations that had been the prelude to this surprising adventure. And it struck me: the voice I hadn’t heard, couldn’t have heard, had never heard, was ultimately the loudest. Stephen, our lost sibling, had always been a presence in our family life.

And 70 years after his death, he’d brought his brothers and sisters back together. It was true what Mum had said. I am one of 11.

Postscript: Last October, with the border closure making it impossible for me to travel from Sydney to Anthony’s home in Queensland, I phoned my brother to tell him what I’d uncovered about his past. Ever practical, Anthony’s first response was bemusement that I’d gone to so much trouble to navigate the dilemma. Then he reflected on what Mum had said to him, near delirium in her hospital bed, shortly before she died. “Don’t believe anything you read about Stephen,” she had told him, looking to protect him until her very last breath. Having inherited the family secret, I appreciated the burden it must have placed on her for all those years. But it also confirmed for me a greater truth: secrets often reveal more about the people who keep them than those they are supposedly about.

To read more from Good Weekend magazine, visit our page at The Sydney Morning Herald, The Age and Brisbane Times.

The best of Good Weekend delivered to your inbox every Saturday morning. Sign up here.