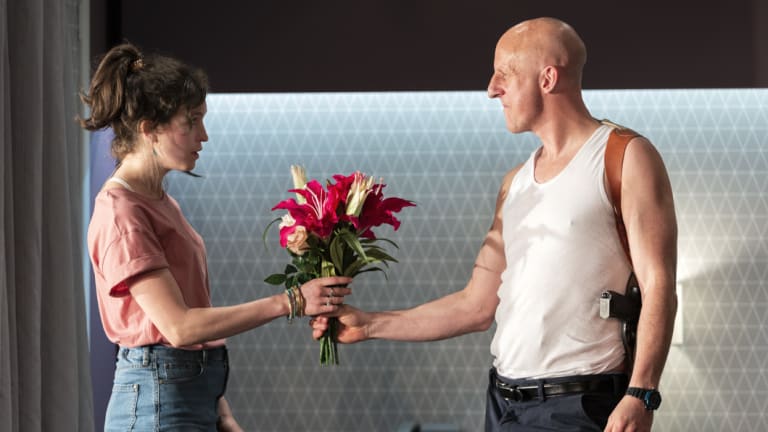 Branded a "disgusting feast of filth" by the media at its premiere in 1995, Sarah Kane's first play Blasted attracted notoriety from the start; though at this distance it's the criticism rather than the play that will live in infamy.

Make no mistake: Kane's imagination is mercilessly dark – more extreme in its brutality than other "in yer face" English playwrights of the '90s, such as Mark Ravenhill – and her play's list of trigger warnings is almost TL;DR. 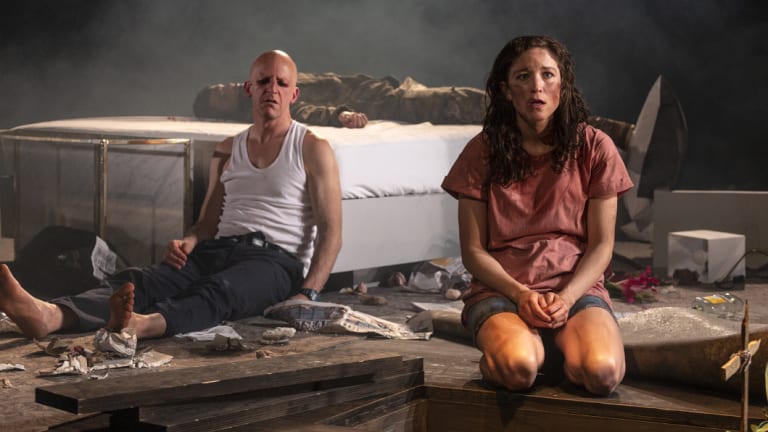 The lines between domestic and wartime abuse become blurred.

Blasted contains graphic depictions of rape and suicide. It has descriptions of war crimes. There's one scene you can never unsee where a starving man eats a dead baby. You can even hear the bones crunching wetly in his mouth.

Such visceral detail is key to Anne-Louise Sarks' commanding production for the Malthouse, which seizes the helpless mind like a nightmare and won't let go.

It starts with a seduction scene in a posh Leeds hotel room, and the elevated set looks like the scene of a crime before any bombs even go off. All ready for a dirty weekend is Ian (David Woods) – a racist, homophobic tabloid journalist with a gun – who's intent on ravishing the vulnerable, much younger Cate (Eloise Mignon). 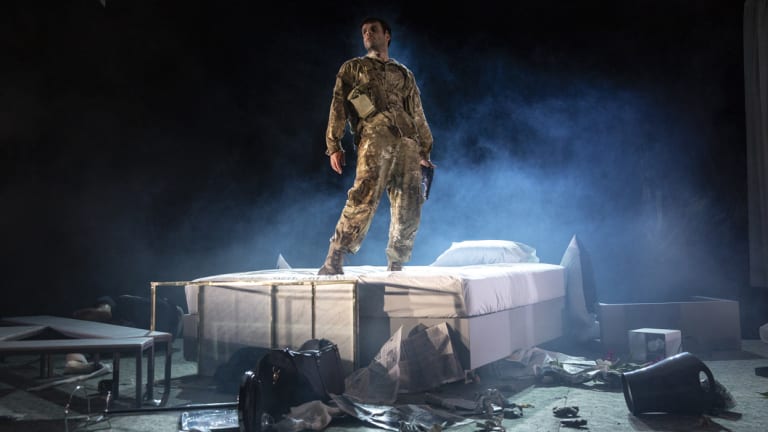 Fayssal Bazzi as both victim and perpetrator.

Seduction will become coercion – that much we know – but the sickening inevitability of the slide from one to the other is heightened by a performance style that homes in on and grotesquely amplifies gendered behaviour.

Woods inhabits an especially repellent vision of toxic masculinity. He's utterly creepy and predatory, but it's a gnawing, familiar awfulness that most women (and not a few men) will immediately recognise as drawn from life.

Blasted will shock and haunt you, yes, but it will also jolt you out of complicity.

Mignon's Cate is distorted by gender stereotypes, too: emotional, naive and uneducated, she's a lamb to the slaughter and her agony, while piteous, isn't as affecting as her transformation into survivor, trading sex for food as the play explodes into a war zone.

The arrival of a soldier (Fayssal Bazzi) collapses not only a stage wall but the wall between domestic violence and war rape. Bazzi makes a ghastly, tormented incarnation of a war criminal – both perpetrator and victim of the most appalling inhumanity – and unleashes the full freight of the play's horror.

Kane's bleak and visionary play was written long before the #MeToo movement, yet it feels even more relevant today. This production has disciplined, nuanced performances and brings her savage drama to life with scarifying precision.

Blasted will shock and haunt you, yes, but it will also jolt you out of complicity.