If we are seeing more older actors on our screens these days, says Ian McKellen, it is because there are so many more people of autumnal years out there in the world, working at whatever it is they have always done and – with any luck – still getting better at it.

"Aren’t there? Starting with the Queen in our country!" he says. "The last time I had to go to Buckingham Palace to get a medal, as we shook hands she said, 'You’ve been at this for an awfully long time, haven’t you?' And I looked up into this wrinkled old face and said, 'Well, not as long as you have, ma'am', for which I was rewarded with this very nice smile and a handshake that pushed me away!"

He chuckles fruitily. Why wouldn't you want to make films about elderly characters? he asks rhetorically. At least they have some decent stories to tell.

"I had an 80th birthday recently and I had a lunch with all the boys who had been in my class at school. They’re all 80 too now, of course. Well, there were 30 of them. Twelve of them didn’t turn up because they’re dead or they were walking the dog or they were ill or away, but the others were hale and hearty, full of beans, nothing wrong up there, nothing wrong with their bodies. I think an awful lot of old people are still functioning. 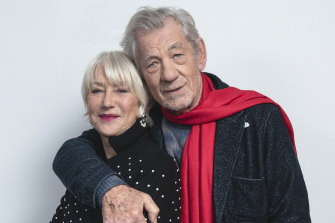 Helen Mirren and Ian McKellen star in The Good Liar. ”At least when you employ us, you know what you’re getting. No nonsense,” says McKellen.Credit:AP

"And at least when you employ us, you know what you’re getting. No nonsense. Can deliver. Still interested. Why not? It’s much easier than working with some kids who haven't a clue what is expected of them." He pauses fractionally: an expertly calculated moment in which to savour irony. "That can be exciting too, of course."

But what stories can youth tell? "That they fall in love? That they want to have sex? That they can run? That they’re hungry? That they’ve got angst? And what have we got?"

A lot of life happens in eight decades.

Not many lives, however, resemble that of the character McKellen plays in his new film, The Good Liar, a Hitchcock-inflected intrigue based on Nicholas Searle’s novel. Roy Courtnay is an elderly swindler, whom we first meet moving in on a likely mark: an ageing widow called Betty whom he has picked out from a dating site. Helen Mirren plays Betty. She is vital, attractive, newly widowed and apparently richer than Roy had first hoped; he wines and dines her with a practised conman's charm.

"But it’s Helen Mirren, right?" says director Bill Condon. "You know she’s up to something."

This is Bill Condon’s fourth film with McKellen. He first worked with him 21 years ago on Gods and Monsters, winning an Oscar for his screenplay about the closeted gay film director James Whale. He recalls how McKellen would call him up at night after watching the dailies, worrying over his technique.

"This happened like three times. He’d say, 'I’ve just been looking at [co-star] Brendan Fraser, what he can do with the raising of an eyebrow and the tilt of a head. I just don’t know how to do that!' And I would reassure him that his character was [supposed to be] theatrical, but I do think he has treated it as a constant learning process to really, really understand the camera. And it's remarkable how effortless I think that has become for him. I really think he does get better and better." 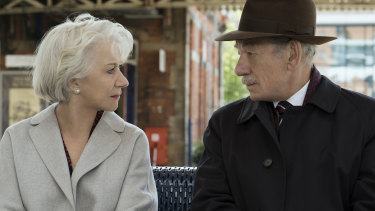 Condon is in New York with his two stars for The Good Liar’s premiere. Helen Mirren, who arrives for the interview heavily styled in a purple Valentino cape – "I didn’t wake up looking like this!" she says briskly – has never appeared on screen with McKellen before but, as she says, they have "swum in the same pond for a long time". They have also performed together on stage, in an acclaimed production of Strindberg’s Dance of Death; this doesn’t seem to have registered with the American film journalists, but it is core business for them.

Mirren, 74, remains best known to film audiences as the Queen; McKellen is forever Gandalf. A long career, they agree, requires some attention to fitness, plenty of sleep and a good mix between meaty roles in independent films and fun blockbusters.

"I do Fast and Furious; I come in and play with Vin Diesel, who is a great friend, and I just have a couple of days of incredible fun," says Mirren. An actor trailing a long CV also needs the nerve to hold out against type-casting.

"If you do one thing mildly successfully, then the next five things you get offered are basically the same thing," she continues. "You have to have the strength to say no to all of those and find the one that is a surprise." She was initially reluctant to play Catherine the Great, yet another monarch, in the current television series. "It turned out not to be a mistake," she agrees. "But at the time, I went, 'Oh no, I’m stuck'."

According to Condon, McKellen was in two minds about The Good Liar. Before Gandalf, he had played a lot of Shakespearean villains. "I think he had this little like twinge of, 'Oh my God, I'm going to go back to that guy who gets the boos at the end because, you know, I'm the baddie'," he says. But for a director, the heritage actors bring with them can be useful. "I think that's the great thing about movie actors who have been able to choose what they do. Their filmography becomes their autobiography. You get to know who they are through that process."

Mirren was the only person Condon could imagine as Betty, because he had seen that svelte intelligence at work so many times: "It just felt to me that Helen – that vibrancy, that eternal sexuality – was so much a part of the character I originally read in the novel."

There was a time, says McKellen, when he imagined he might escape all that by doing something else altogether. "I thought I’d take time off and not act for a bit and do all sorts of other things, like go to museums, walk round London, travel, all of that, see more of France. Well, what I missed and why I went back to work was feeling there’s something I do well, that’s mine and that re-affirms that Ian McKellen exists in the world. And that I can get better at it. That’s what keeps me going. It reminds me that I’m alive and that there is a purpose to being alive."

He ruminates on this, makes a few jokes, comes back to it. "There is a line in Gods and Monsters, where James Whale says making movies is the most wonderful thing in the world," he says. "Working with friends, entertaining people. That sums it up entirely."

And clearly, the audiences are out there. Why would they not be? he reasons. Older people want to see themselves. Younger people enjoy their grandparents’ wacky pre-digital anecdotes; they may also want to see films about people older than they are. And the actors have all those runs on the board.

"Long may people want to see people who know what they’re doing," says McKellen. "And who are still at it."

The Good Liar opens on December 5.