In a romantic garden near Rome, Rosslynd Piggott once found herself enveloped by the rare beauty of the place. Occupying the site of Ninfa, a once-ruined medieval village, the garden had water running through it – spring-water so crystal-clear, the reflections made it look as if there were another garden mystically below the surface.

And the air was divine: Piggott captured it in a delicate glass vessel, just as she has done in places such as France or Japan for other artworks. 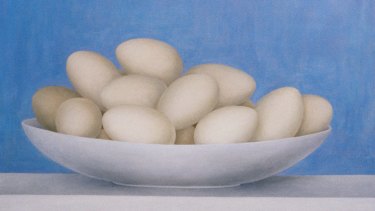 Nature-Morte, Eggs 1 (detail), 1990/91, is part of the exhibition, I sense you but I cannot see you, that examines 30 years of Rosslynd Piggott’s work.

Air, water, glass. Breath, reflections, auras. These are Piggott's materials, but also her tools and her subject matter. The atmosphere suffusing her work is like a subtle fragrance: just as you feel you have caught a hint of it, it evaporates, lingering like the feeling of deja vu.

Here is Piggott in a large workroom at the National Gallery of Victoria, where objects have been brought out of storage, de-boxed and unwrapped. There are exquisite glass vessels, ages-old pairs of hand-crafted footwear, and, among other treasures belonging to Piggott, a most extraordinary oval-shaped bell-jar housing a projection of a graceful figure, revolving like a dreamy apparition. 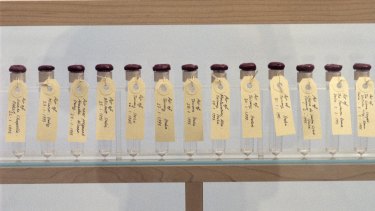 The items have been carefully arranged inside two handsome display cabinets, aligned to face one another. Visitors will pass by the two cabinets, paired like lungs, the air between them being inhaled, suspended, exhaled. A vacant chair will indicate an absent sitter; mirrors in the background will offer reflections.

The cabinets form an installation called Double Breath (contained) of the sitter (1993), part of an extensive retrospective at NGV Australia. The exhibition, I sense you but I cannot see you, examines 30 years of Piggott's work. Even the poetry of these titles captures the artist's careful calibration of how she offers us her perceptions of the world around her.

Piggott is a painter and most days she can be found in her studio, using brush and paint. Her installations, though, comprise images that seem to have been transported off a canvas and coaxed into three dimensions – but not quite. Perhaps they haven't fully made it across from that other realm, which is why viewers might feel as if some mesmerism is at work.

There are so many stories to tell, says Piggott, thinking of her life's work so far. This retrospective stretches back to the mid-1980s, when she began exhibiting in earnest. One of the first paintings she launched her career with will greet visitors when they enter this multi-room exhibition. Glasses of water or A room with four walls of glasses of water (1986) was first shown at Gertrude Street in 1987, and Piggott says it was a harbinger of things to come: her subsequent works seem to have drifted out of that painting's particular universe. 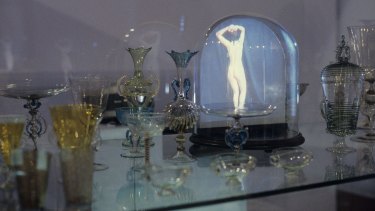 Piggott had a survey show at the NGV in 1998 called Suspended Breath, which boldly displayed only her installations, despite her being well-known for her works on canvas. It was a great success but for this retrospective audiences will get to explore her work in much greater breadth, says curator Jane Devery, who writes in the catalogue that for more than three decades, Piggott has been giving form to "hard-to-name sensations" in her paintings, objects and installations.

"Her works have courted the elusive and the ethereal. They have captured states of flux. They have circled ideas of impermanence, the fleeting and the fugitive. Piggott's career-long obsession with the intangible is evident in works from all phases of her career, carried by certain motifs and materials that appear time and again."

Devery has been working closely with Piggott, especially on the Double Breath installation. This work has had several iterations: the first time, she drew upon objects from the NGV collection, including Venetian glassware, Viennese and English furniture and 19th-century garments and shoes. Devery notes that Jason Smith, the curator of 1998's Suspended Breath, where another iteration of Double Breath was formulated, wrote at the time that "elegance, fragility, purity, intimacy, illumination of time, and suggestion of possible narratives" were at the heart of the work.

This time, the Venetian glass was not available so Piggott, with her own small glass collection, provided some of her beauties found at vintage shops in Melbourne and Italy or at online auctions: something from 1920, another from the 1970s. There are bowls and fluted vases and aqua trims and golden metallic tints and delicate bubblings in this eclectic but fine glassware. 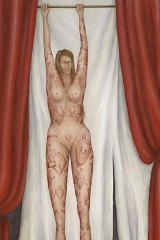 It's no surprise to learn that Piggott's 2017 PhD thesis explored the way the house and house-museum are used as sites for artistic and curatorial intervention. "The premise was that objects can carry a deep intimacy in those environments," Piggott says. Thus, in 2013, her installation Murmur (mûr'mr) was housed within and drew upon the items of the Johnston Collection, in East Melbourne, and the exhibition associated with her PhD was housed in her own studio and adjoining apartment.

There, a transparent scrim partitioned off the living room. "It was like looking through a vapour," she says. Various glass items, old blackened mirrors and other objects were arranged around the place and even on the bed; the apartment was almost unlivable for 10 days. 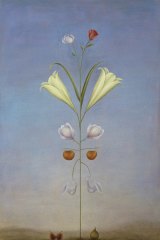 The mirrors, with that patina of age, are the sorts of objects Piggott likes to work with – items that have had "an evident life", such as the old shoes from the NGV's collection, many too battered for a conventional museum display. Opening the bland archive boxes to discover and re-purpose their contents has been a delight for Piggott.

"It is almost like this aura comes out of the box," she says. "Because I am not a curator and I am not an historian I am not saying to myself 'that is a great example of 19th century French Pinet boots from 1910' – I am more interested in the fact that you can 'feel' the owner, particularly with the children's shoes." 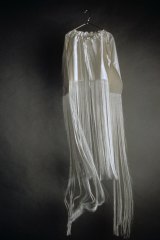 Instead of having conventional labelling with such objects, she has little handwritten tags. "I have conjured names." Apollonia. Orlando. Delphine. Ilsa. You can almost see them.

It makes sense, then, that one of her longstanding friends is the Paris-based Australian designer Martin Grant. For decades they have wanted to do a show together and, last year, the time was right. At his showrooms near the Picasso Museum, they occupied a corridor, an entrance, and three connected salons.

The placement of items became "a gorgeous conversation between us". So, too, do we enter a dialogue within Piggott's retrospective: we may not see her, but we can sense her selective hand at work.

Rosslynd Piggott: I sense you but I cannot see you is at NGV Australia, Federation Square, April 12-August 18. ngv.vic.gov.au