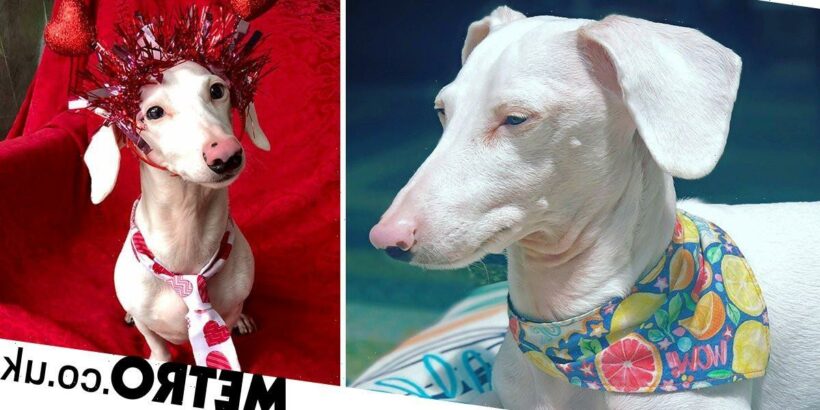 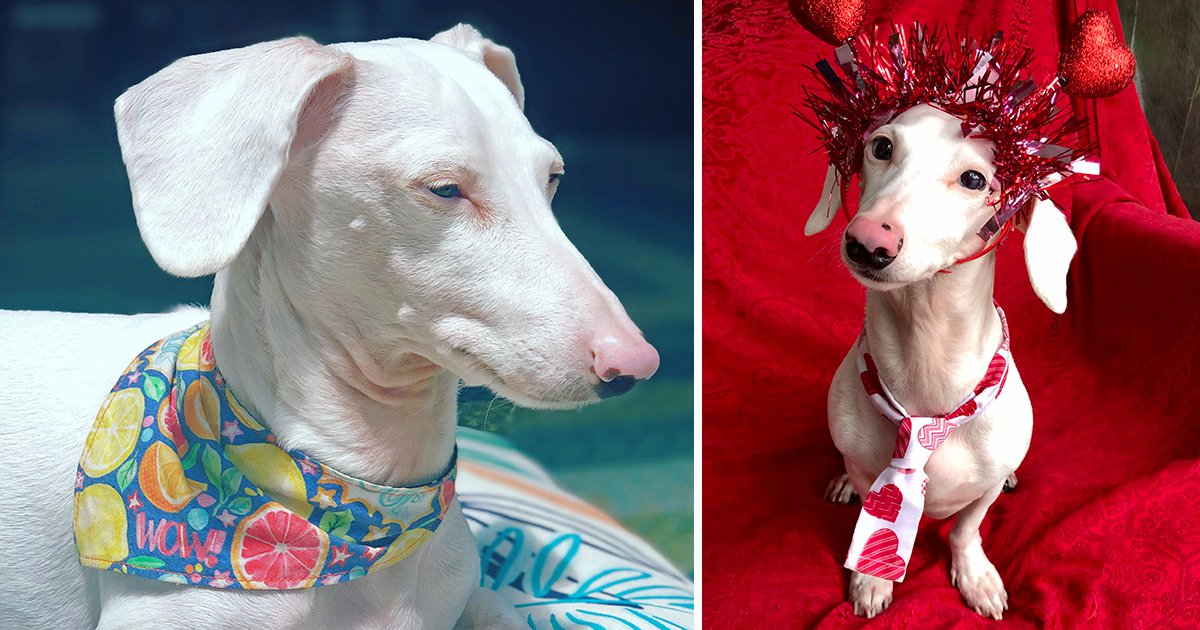 For a long time, Duke the dachshund struggled to find a home.

This was due to his rare looks and special needs – the sausage dog is albino, meaning he’s all-white with a pink nose and light blue eyes, he is partially deaf and blind, and is super sensitive to sunlight.

But in 2013, Duke met his perfect match in Mercedes Andrade, 38, from Texas, US, who says it was love at first sight.

Mercedes said: ‘Until the day I met Duke, I had never seen or heard of an albino dachshund.

‘Creams, dapples, blue, greys, piebalds, merles – seen them all, but pristine white with a pink nose and blue eyes, never!’

She hadn’t even planned to adopt a dog that day, and was just paying the puppies a visit.

But when she laid her eyes on Duke, she knew she couldn’t leave without him.

‘Among the playing puppies, there he was, the smallest of them – a white, blue-eyed, pink-nosed cutie,’ Mercedes remembers.

‘You couldn’t help but mention how stunning he was.

‘He chose us to be his family, not the other way around. He knew that he would be in a safe and happy home.’

Since then, Duke is now living his best life.

He’s become an Instagram star, is showered with love and affection, and attracts plenty of compliments from people who appreciate his unusual looks.

Mercedes said: ‘Almost everyone who approaches him says they’ve never seen an albino one before.

‘He gets a lot of attention and loves every minute of it, and they often request to take photos of him.

‘I normally get a lot of messages on his Instagram saying that he’s absolutely beautiful and when I read his messages to him, it’s like he knows how special he really is.’

Along with his other special needs, Duke has a dilated cardriomyopathy, which means is heart is bigger than usual.

He also has to wear a hat and apply sunscreen to avoid being scorched by the sun.

‘Duke is a special needs dog,’ said Mercedes. ‘He is lucky in that he is not fully blind and deaf like most albinos’ fate, but he has his fair share of issues.

‘His pupils are heavily distorted, but he still has some vision in his left eye – just enough to get around.

‘He is also partially deaf, hearing best only high-pitched sounds, such as a whistle. Both of these things make training more difficult than normal.’

None of this holds Duke back. He loves to run around and play, and relies on his older sister, a dachshund named Dior, for any guidance he needs.

Mercedes is forever grateful to have such a special dog in her life.

‘Duke is unlike any other dachshund I’ve had,’ she said. ‘He is loving with everyone and loves to be loved.

‘He loves playing fetch with all his toys, morning and evening walks, and to my pleasant surprise, loves his bandanas and getting his pictures taken.

‘He has learned a version of hide and seek – he will go into the closet and close the door. He’ll then scratch at the door so you can find him.

‘Duke and I are stuck like glue and in his opinion, this pandemic has probably been the best thing ever, since it means I’m home with him every single day.’