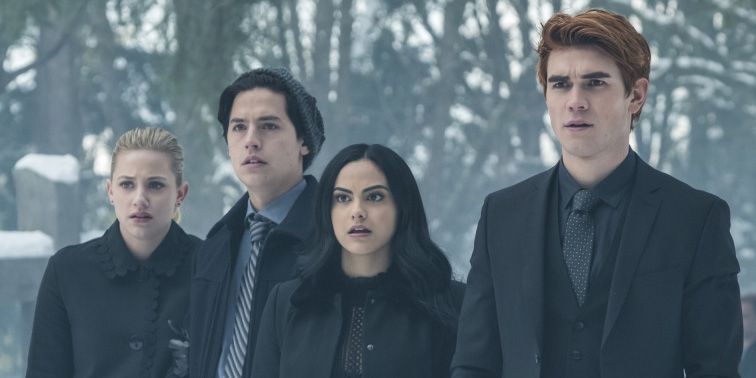 Last week’s musical episode of Riverdale featured several shocks, including the return of the Black Hood. While no one really believed Mr. Svenson was responsible for the Black Hood’s crimes, the real serial killer chose a particularly brutal way to return to the show—by murdering Moose’s girlfriend, Midge.

Following the unexpected death of one of their fellow students, painful secrets come to light in Riverdale—including a life-changing revelation from Alice. Here’s everything that happened in Season 2, Episode 19 of Riverdale, “Prisoners”:

1) The episode opens with Midge’s funeral.

Everyone in Riverdale turns out for Midge’s tragic funeral, with Cheryl even singing a tribute to the former student. The town is understandably shocked and devastated by Midge’s death, and everyone’s desperate for answers about how this happened again.

2) The Sheriff interviews everyone who was present at the scene of the murder.

Which is everyone involved in Carrie: The Musical. In the police interrogation, Ethel reveals that though she did send the threatening letters demanding Cheryl be recast in the school production, she did not do anything violent.

Since Jughead was filming a behind-the-scenes documentary of the musical, he has important information about the locations of any key suspects. However, it’s clear that Sheriff Keller has no leads, even after questioning everyone.

Basically, the Sheriff is still a pretty key suspect.

3) The Black Hood is going after victims that escaped him.

With a message written in Midge’s blood at the crime scene, the Black Hood revealed he was reigniting his reign of terror by going after anyone who escaped him the first time. As Midge and her boyfriend Moose were attacked in the woods but didn’t die, it seems that anyone else who almost died at the hands of the serial killer is in serious trouble. Including Fred Andrews.

4) Archie isn’t convinced that Mr. Svenson was the Black Hood.

He tells the Sheriff that something felt wrong about that night on the bridge when Svenson was shot. Archie suspects the caretaker wasn’t the real killer after all. But Sheriff Keller assures him they caught the right person.

Speaking to his friends at Pop’s, Archie floats the theories that Svenson was working with someone else, or that the real Black Hood made the caretaker bury Archie alive.

Unimpressed with the Sheriff’s lack of progress with the Black Hood and his failed investigation into the death of her brother last season, Cheryl makes a threat, telling him, “Your days of failing this town over and over again are numbered.”

Jughead muses that maybe the Black Hood isn’t back, but the new killer is a copycat emulating the original crimes. However, Betty seems to debunk this theory later on…

7) Betty wants Chic to leave town, but her mom won’t allow it.

Knowing that everyone is being questioned in connection to Midge’s murder, Betty announces that Chic should leave town. She’s worried he’ll reveal he killed a man in the Cooper’s house and that will put her mom in danger. But Alice Cooper says Chic isn’t going anywhere.

8) Archie wants his dad to leave town to protect himself.

Fred’s a former victim of the Black Hood, after all, but he says he’s not about to leave his son alone in Riverdale. Archie is understandably anxious that the Black Hood will be back for father dad.

9) Betty finds a connection between Mr. Svenson and Chic.

Doing some detective work of their own, Betty and Jughead realize both Chic and Mr. Svenson spent time at the covent that housed Penny while she was secretly pregnant and Cheryl while she was undergoing gay conversion therapy. Since they both spent time at The Sisters of Quiet Mercy, Betty theorizes they might’ve known each other, and could, possibly, have been working together to commit Riverdale’s murders.

As part of her mayoral campaign, Hermione wants to get rid of Sheriff Keller, presumably so she can have a new Sheriff under her thumb. When she hears that Cheryl threatened the Sheriff, she asks her if they can work together to get rid of him. Cheryl agrees to write a piece in the school newspaper disparaging Sheriff Keller’s work.

When one of the sisters refuses to give Betty the information she wants about Chic, she tells her they’ll be back with the FBI and a court order to shut down the covent. The sister obliges and shares Chic Cooper’s file with Betty and Jughead.

The sister says, “You can see the family resemblance.” But the photo of Charles Smith, the baby that Alice gave up for adoption, isn’t the same person as Chic. Chic is an imposter!

In an attempt to protect his dad, Archie investigates the Black Hood on his own by going to Mr. Svenson’s place alone. When he gets there, he’s jumped by several people wearing black hoods and balaclavas. They kidnap him.

Betty shows her mom the photo of the “real” Charles Smith, telling her Alice that Chic isn’t her son after all all. Cornered, Chic grabs a knife and swipes it at the family, cutting Alice in the process. Betty manages to hit him to the ground. They tie up the unconscious Chic in the basement to interrogate him.

Answering a call from Archie, Veronica is shocked to hear Nick St. Clair’s voice. She calls him “Nick St. Sicko,” which is maybe the best nickname anyone has ever coined. He reveals that he has Archie and plans to hurt him unless she can produce “a cool million” in ransom.

Hermione and Hiram won’t pay for Archie’s release because he isn’t blood—they think doing so would prove they’re vulnerable.

Chic isn’t Alice’s son. His name is Chic, but he isn’t Charles Smith, the baby Alice gave up for adoption. He tells Alice that Charles told him all about the Coopers and that he’d even turned up at their house before, only to be turned away. Alice apparently slammed the door in Charles’ face, not realizing he was her son. Chic tells them that Charles went on a bender after that incident and overdosed on Jingle Jangle. Sadly, Betty’s real brother is apparently dead.

In a bid to save Archie, Veronica breaks into the family safe. There’s not enough money in it, but she lies to Nick and tells him she has the ransom.

19) Sheriff Keller begins to doubt his own detective work.

He tells Kevin that maybe he didn’t have enough evidence to close the Black Hood case, and that he feels responsible for the latest death. As they’re talking, someone vandalizes the Sheriff’s car, emblazoning it with the word “killer” instead of Keller.

20) Nick says he’ll waive the rest of his ransom if Veronica sleeps with him.

Nick wants “what I’m owed,” which is apparently sex with Veronica, making him the grossest character Riverdale has seen in a while. Veronica agrees to meet Nick at his hotel in return for Archie’s safe return.

21) Alice tells FP that she had his baby.

Even though the world already figured this one out, Alice had yet to tell FP that she gave birth to his child while they were still in high school. Sobbing, she tells him that she’s responsible for their child’s death, but FP just holds her. It’s clear there’s still a strong connection between them.

The dreaded phone calls restart. The Black Hood reveals that he killed Midge, set Mr. Svenson up, and is mad that the Coopers let Chic, “an enemy, a sinner” into their home. He tells Betty Chic was living in a “den of sinners” and killed before. The Black Hood doesn’t like Chic, at all.

In a later phone call, the Black Hood tells Betty he wants to murder Chic next and asks her to give Chic to him.

Disgusting Nick St. Clair sets up a laptop in front of Archie so he can watch everything that happens when Veronica turns up at the hotel room.

He reveals to Archie that he doesn’t just plan to sleep with Veronica but also kill her, to make his “bones” and join the mob.

Betty and Jug learn from a neighbor that Charles and Chic used to live together in an apartment. The neighbor reveals that the pair used to fight all the time, and one day, there was only one of them left. There was also bloody evidence in the trash—presumably because Chic murdered Charles.

25) Archie free himself and escapes.

Seeing Veronica arrive on the live feed, Archie rages and manages to free himself from the chair he’s tied to. He runs to save Veronica.

26) Alice tells Hal about the murder committed under their roof.

Alice reveals to Hal that Chic killed someone in their house, but she lies and says that Betty had nothing to do with it. As a family, they try to decide what to do with Chic, especially so the police don’t find out the Coopers were accomplices to a murder.

One step ahead of Nick’s plan, Veronica roofies his drink. He passes out before anything can happen. Archie arrives to find Nick on the floor and Veronica fine, having sorted out the problem herself. She calls Nick’s dad and asks for “a cool million” for his safe return.

Betty unties Chic at gunpoint and leads him out of the Cooper house and to a park. After revealing to Betty that he did kill her real brother, Chic spots a dark hooded figure. He asks who it is, and Betty replies, “That’s your very own angel of death.” She hands over Chic to the serial killer.

He’s probably the Black Hood at this point, right?

30) Archie says he wants to prove himself to Hiram.

For some reason, Archie still wants to impress Hiram, and asks him if bringing down the Black Hood would earn him his bones. Why Archie cares about being in Hiram’s gang is beyond any of us.

Arriving home after handing Chic over to the Black Hood, Betty asks Alice, “Mom, where’s Dad?” and Alice reveals he left to look for Betty. Instantly, she thinks her dad is the Black Hood. But this seems way too convenient, especially since Hal openly hated Chic. It’s way more likely that Sheriff Keller is the Black Hood, and hated Chic because he was growing closer to Kevin Keller, his son.