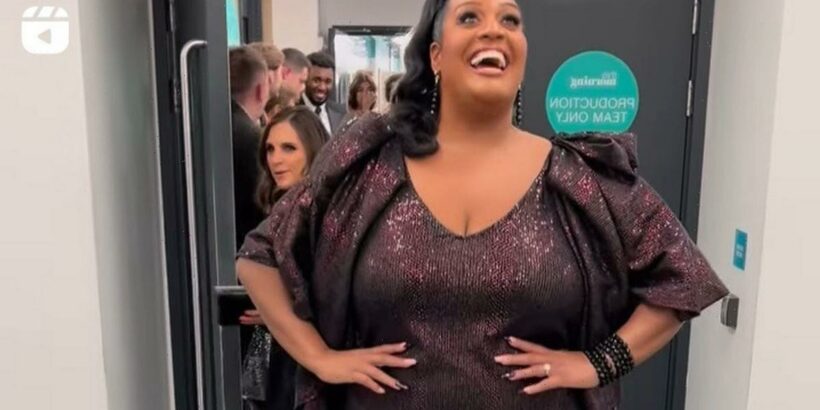 Alison Hammond looked sensational as she took to Instagram to reveal her National Television Awards outfit of choice before hitting the red carpet.

The 47 year old,who has been called a “deserving winner” ahead of the ceremony by pal Gok Wan, took to the social media platform to show off her dazzling gown as she made her way to the awards show alongside herThis Morning co-stars.

Posting a video to her page, the TV personality could be seen walking down a corridor at the This Morning studio as she practiced her best wave and smile for the cameras, ready for tonight's highly-anticipated ceremony.

For the occasion, NTA nominee Alison looked radiant as she opted for a purple glittery gown with some gorgeous capped sleeves and a plunging neckline.

To finish off the look, the former Big Brother star wore her hair in a sleek high ponytail and paired the outfit with some black barely there heels.

Meanwhile another video of the star showed off her extremely glamorous makeup which featured a dramatic smokey eye, nude lip and glowy skin.

After sharing the videos, Alison was inundated with messages from fans and celeb pals, wishing her all the best followingher nomination for the Best TV Presenter category.

Alison isn’t the only ITV celeb to opt for an old school glamour look for this year’s NTAs, withfellow This Morning host Holly Willoughby also opting for a Hollywood-esque look.

A similar gown to the one she wore for the 2020 ceremony, the dress features a corset bodice and is decorated with a series of velvet flowers that trail towards the floor.

To compliment the outfit, the TV personality kept things minimal and wore her hair up in a low bun and allowed her face framing layers to rest alongside her cheeks.

Elsewhere,former Coronation Street star Millie Gibson hinted earlier on in the day that she’d be opting for a classic look inspired by ‘90s icon Pamela Anderson.

Taking to her Instagram Stories, the soap star shared a snap of herself getting ready and let her fans know that she’d be “making my [her] Pammy dreams come true” at tonight’s awards show.