The general manager of Alton Towers has admitted he feels ‘personally responsible for injuring people’ three years on from the June 2015 Smiler crash.

Ian Crabbe has worked at the Staffordshire theme park for eight years and said the horrific accident that left 16 people injured after two carriages collided on the rollercoaster has haunted him ever since.

Five people were seriously hurt in the collision, including Vicky Balch and Leah Washington, who were both forced to undergo a leg amputation as a result of the horror crash.

In the Channel 4 documentary Inside Alton Towers, cameras go behind-the-scenes to follow the team as they prepare for the launch of the first wooden rollercoaster built in Britain in 21 years.

The £16million Wicker Man ride is the result of a major cash injection for the park in the desperate hope that it will bring back guests put off by the 2015 incident. 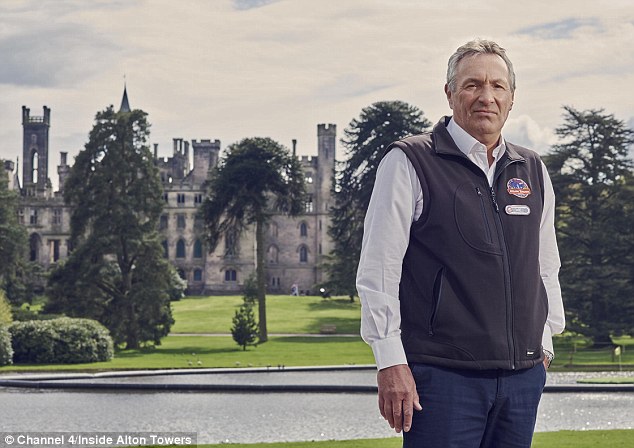 Ian Crabbe, pictured, has been Alton Towers’ general manager for eight years and in a new Channel 4 documentary recalls the devastating impact the Smiler rollercoaster crash in June 2015 had on him and the park 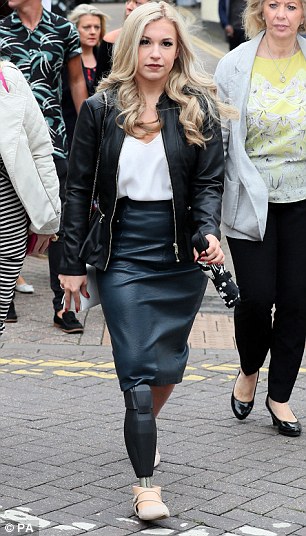 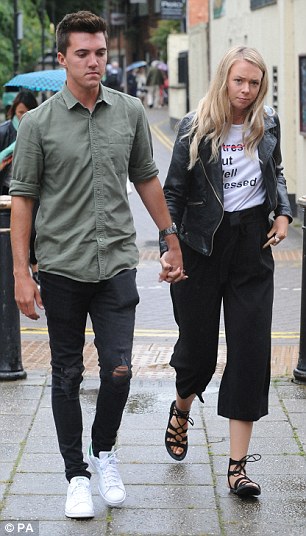 Vicky Balch, then 19, (left in 2016) from Leyland, Lancashire, and Leah Washington, then 17, (right in 2016 with her boyfriend Joe Pugh who was also injured) from Barnsley, South Yorkshire, were both forced to undergo leg amputations as a result of the horror crash 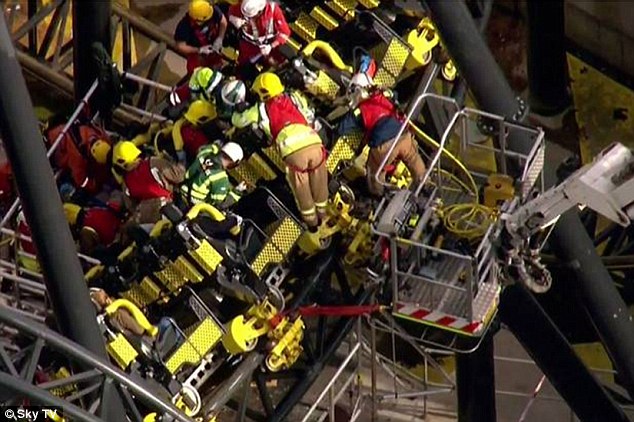 Emergency services work to free trapped visitors after two carriages smashed into each other on the Alton Towers’ Smiler ride in June 2015. Two young women had to have a leg amputated in the horror smash, while 14 more were injured – leading to dwindling visitor numbers

Ian explained he had been a fan of the theme park, owned by Merlin Entertainment, since his first visit as a young boy and it had always been his dream job to work as the general manager.

Speaking about how staff reacted to the 2015 crash, he recalled: ‘The impossible had happened and what had happened was the complete opposite of what we’re here for. One can’t exaggerate that, it’s been absolutely terrible for everybody.

‘One has to remember the victims, and for me personally, it was traumatic in my senior role, I was responsible for injuring people.’

There were serious repercussions for Alton Towers as a criminal investigation found the park guilty of catastrophic failure of health and safety and fined £5million.

New safety measures were brought in and compensation claims are still being assessed, while the park suffered a huge dip in visitor numbers.

Ian said he hoped the new Wicker Man ride would encourage people to come back, explaining: ‘On a business level we were heavily impacted and we can only reassure people by people coming.

‘We can only reassure them by people getting on the rides and recognising we are safe.’ 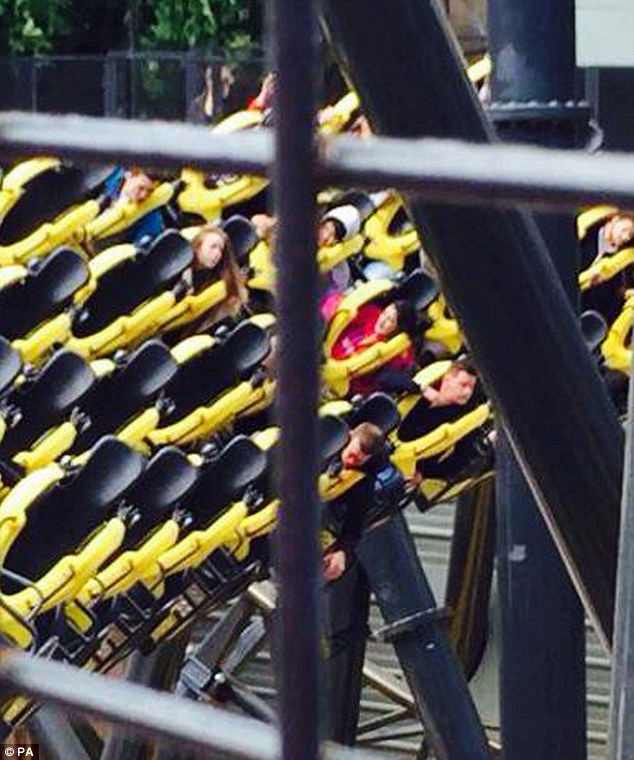 Victims were left dangling in mid-air in the 2015 Smiler collision at Alton Towers, in which a computer block stopping the ride from starting had been over-ridden by staff. Sixteen people were injured including two young girls who had their legs amputated 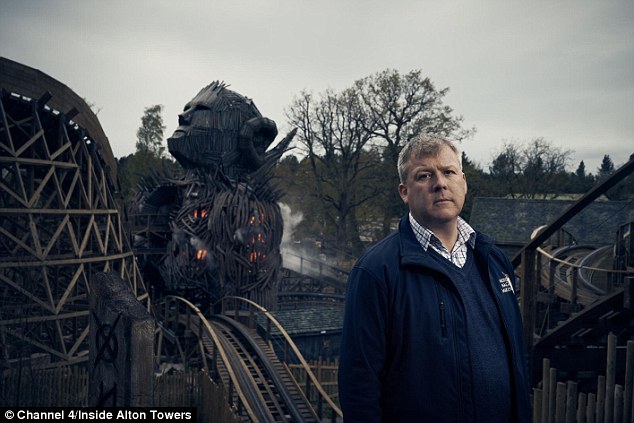 The track of Alton Towers’ new Wicker Man ride (pictured) spans 2,000 feet and it is all made from naturally treated timber that has been hand-carved specially for the project. Senior project manager Neil Walker (pictured) and his team were behind the construction

The pressure is on for park’s latest attraction

The man building the multi-million pound Wicker Man wooden rollercoaster designed by Bradley Wynne, is also hopeful that the immersive experience will attract the curiosity of guests.

The wooden rollercoaster journeys through fire on its way round – and there’s smoke billowing from it, which is actually water vapor.

It’s made from 7.5 thousand tons of wood and goes at up to 46 miles per hour.

Senior project manager Neil Walker spoke of the pressure of delivering a new ride, saying: ‘The fact that I am delivering the first major rollercoaster since the Smiler happened hasn’t been lost on me.

‘People were devastated by what had happened and I’d only been here 12 months,’ he recalled.

‘I was looking at people who had been here for 30 years, that had built this park up and put every one of these rides in and they were absolutely devastated by what had happened. 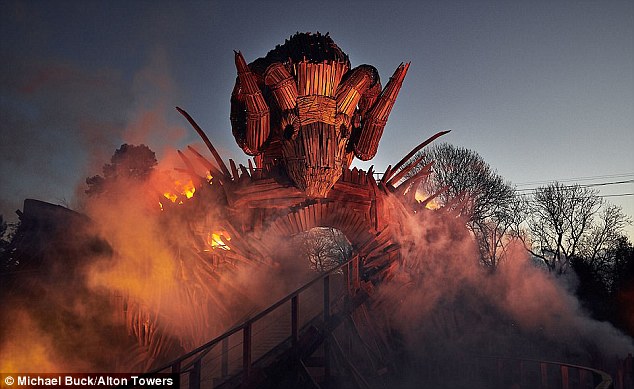 The Wicker Man roller coaster (pictured) sees riders go through the chest of a wooden ram, which soon after bursts into flames. It took Merlin Entertainment, which owns the theme park in Staffordshire, more than four years to complete the ride

‘It was people who had come for a good day out and gone home with really terrible injuries, it’s really affected everybody. Something has happened here and we want to make sure it is put right.’

In the wake of the Smiler accident, safety is at the forefront of new attractions, and the rigorous testing of the ride was filmed by Channel 4 cameras.

The train carriages – each weighing six tonnes and costing the same price as a Bentley at around £450,000 each – were lifted on to the track before being loaded with test dummies.

They were filled with water to weigh the same as a human with the ride tested at least 500 times with different configurations of dummies to ensure it runs correctly under all weights. Only then did the ride get its safety certificate.

Bringing in the visitors

Because visitor numbers are still down, the Alton Towers marketing team have had to reach out beyond their usual target audience.

Using some of the £4m advertising budget, they made a prime time TV ad to show off the new ride with senior brand manager Laura Gerrard in charge of the shoot. 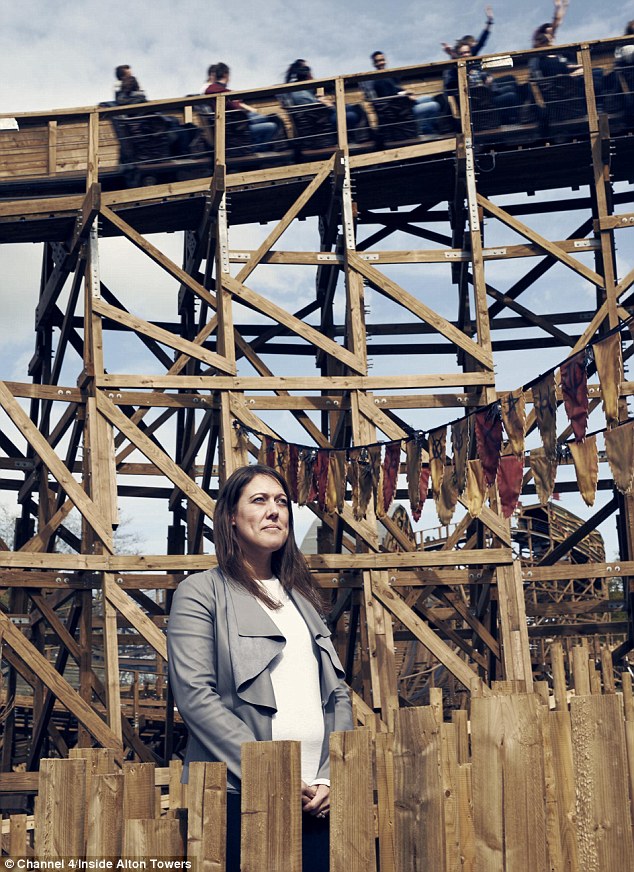 The mother-of-three said of her eight years working at the park: ‘I was one of the core members of the team that worked on the Smiler brand and made it look really exciting and made people want to come and visit.

‘I found it really difficult to accept that something like that could have such a detrimental effect on people’s lives.

‘That’s something I have found very hard to move on from, I still think about it and I still find it difficult.’

Laura added: ‘I hope with Wicker Man it is going to be an opportunity to rebuild that trust with guests.’

After four years in development the 58ft ride was launched at the reopening of the park for the spring season with a warm reception from rollercoaster fanatics.

The track spans 2,000 feet and it is all made from naturally treated timber that has been hand-carved specially for the project.

Every ride will house two trains, each made up of six wooden carriages, carrying 12 passengers, so that’s 24 passengers per ride.

Inside Alton Towers airs on Channel 4, Thursday at 9pm

What happened during the Alton Towers Smiler crash?

On June 2, 2015 visitors were removed from the Alton Towers Smiler ride after a warning light indicated a fault.

Staff sent a test train around the track, but it didn’t make it around. Due to a breakdown in communication, staff did not realise this carrigage was still sitting on the track.

Passengers were let back on but as the first carriage made its way around, the computer system stopped it because it showed something was blocking the track.

Engineers were still not aware that there was a fifth carriage sitting on the track and overrode a fault which had been detected by the computer system, sending the ride crashing into an empty carriage with the force of a ’90mph car crash’.

At least 16 were injured and five people were seriously hurt. Leah Washington from Barnsley, South Yorkshire, and Vicky Balch from Leyland, Lancashire, were both forced to undergo leg amputations as a result of the horror crash.

The Smiler at Alton Park, where 16 people were injured in a 2015 collision (file picture). An investigation found that a computer block stopping the ride because of a stationary car on the track had been over-ridden by staff, causing the crash

The trapped ride-goers had to wait more than four hours to be freed from the crumpled carriage while rescue workers battled to reach them as they sat 25ft up in the air at an angle of about 45 degrees, pinned in by the mangled metal.

In September 2016, Stafford crown court heard that engineers should have seen the empty carriage which was visible on CCTV cameras covering the track.

During court proceedings, there was repeated reference to a report by the HSE compiled by expert Stephen Flanagan.

In its investigation, the safety watchdog found that a ‘near-gale’ may have been to blame for the empty carriage failing to clear the Cobra Loop in the first place, following an early problem with one of the ride’s lifts.

Part of the report not read to the court said that staff were under pressure to keep the ride in almost constant use and offered bonuses to keep it running.

Prosecuting for the Health and Safety Executive (HSE), Bernard Thorogood said that although there had been ‘a number of human errors’, the ‘fault is with the employers’, and not individuals.

The prosecutor went on to say that none of the four engineers involved in working on the Smiler ‘had the full picture or understanding of conditions on the ride’.

He said one engineer who worked on the Smiler that day told investigators after the crash that he had ‘assumed’ the rollercoaster had been fitted with a type of safety trip-switch present on at least one other park ride, when in fact it had not.