Lady Amelia Windsor stood out from the crowd at the royal wedding today as she opted for a bold pink oversized polkadot dress.

Amelia, 23, was once deemed ‘the most beautiful royal’ by society magazine Tatler and has became known for her quirky sense of style.

She was seen in a bright pink oversized dress as she arrived in at St George’s Chapel for Lady Gabriella Windsor’s wedding to Thomas Kingston.

The royal, who is 39th in line to the throne, donned the £890 dress by Turkish designer Gül Hürgel, along with white wedges and a cream fascinator. 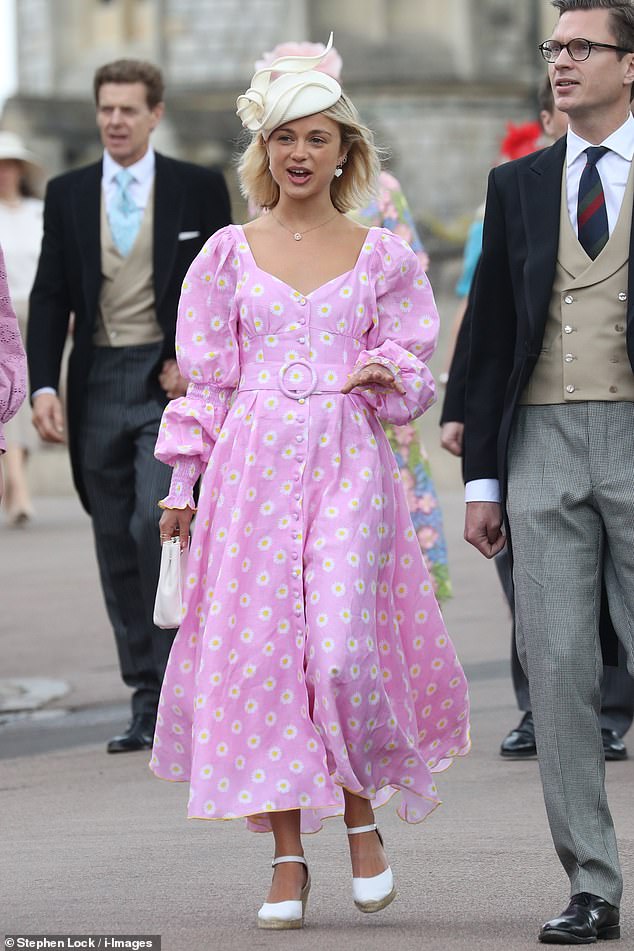 Lady Amelia Windsor, who has been deemed the most beautiful royal by society magazine Tatler, wore an oversized pink dress for Lady Gabriella Windsor’s wedding 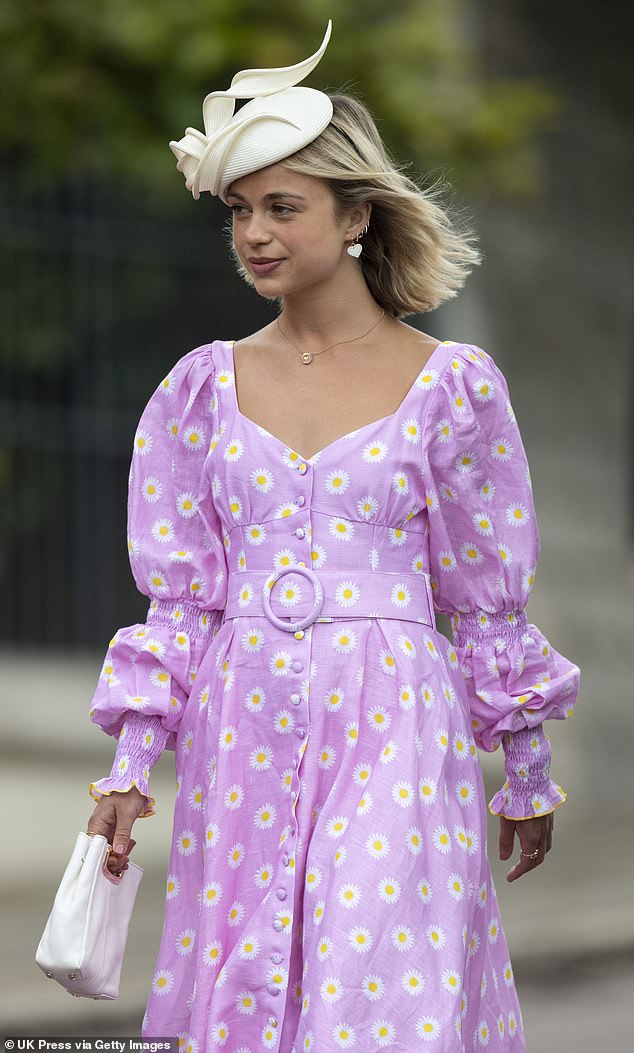 The royal donned a dress with exaggerated sleeves, oversized fit and a polkadot daisy print. She finished off the outfit with a tiny white handbag and white fascinator

The pink gown is defined by a sweetheart neckline and long puffed sleeves that are finished with fluted, shirred cuffs.

The dress flares out into a long skirt complete with a button-fastening front and cotton lining.

Amelia’s stunning figure was highlighted by the oversized belt and cinched in waist of the decadent gown.

Lady Amelia, who is an aspiring fashion designer, is known for mixing high end and high street looks

The royal paired the dress, which costs £890 with white wedges, and finished off the outfit with a small white handbag.

The blonde beauty kept her luscious locks styled straight and opted for minimal makeup with a light flush of on her cheeks, peachy pink lips and mascara.

The royal, who also works as a model, is known for mixing mixes high end pieces with the high street looks.

She is the youngest child of George Windsor, Earl of St Andrews, and Sylvana Tomaselli. Her paternal grandfather, Prince Edward, Duke of Kent, is a first cousin  the Queen.

Aspiring designer Lady Amelia, who was once crowned the ‘most beautiful royal’ by society magazine Tatler, captions the snap online: ‘Seated and booted made from recycled polyamide and Lycra.’ 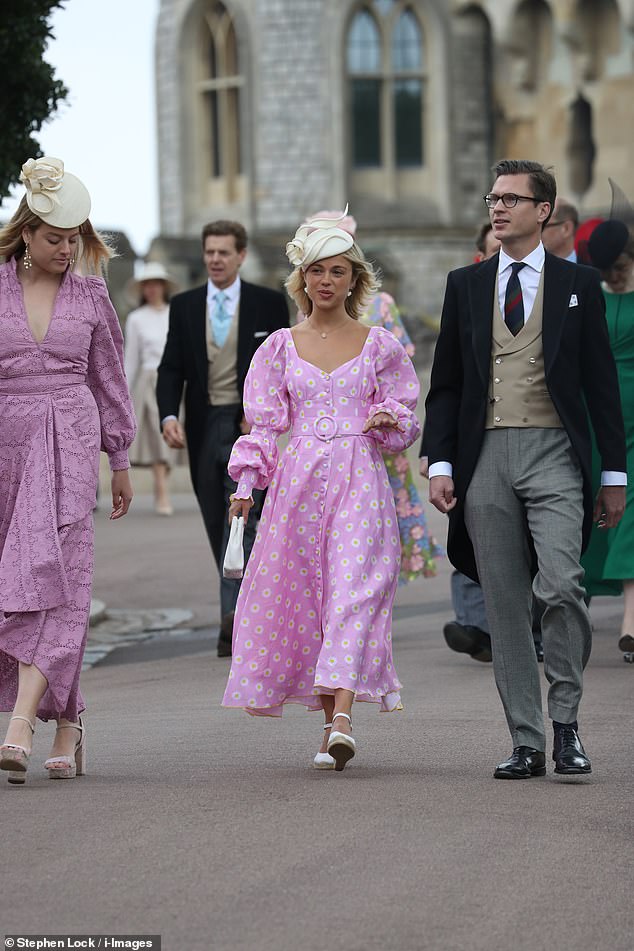 The Queen, Prince Philip, the Duke of Sussex, Princess Anne and the Middletons were amongst the guests of royal bride Lady Gabriella Windsor and groom Thomas Kingston for their wedding today.

Prince Harry attended just 12 days after the birth of Archie, his first son with wife Meghan – and on the eve of their first wedding anniversary. He arrived with Peep Show actress Sophie Winkleman, who is married to Lady Gabriella’s brother Lord Frederick.

Harry also arrived with his uncle and aunt, the Earl of Wessex and the Princess Royal, who was joined by her husband Vice Admiral Timothy Laurence at St George’s Chapel in Windsor Castle for the wedding of Gabriella, the daughter of Prince and Princess Michael of Kent. 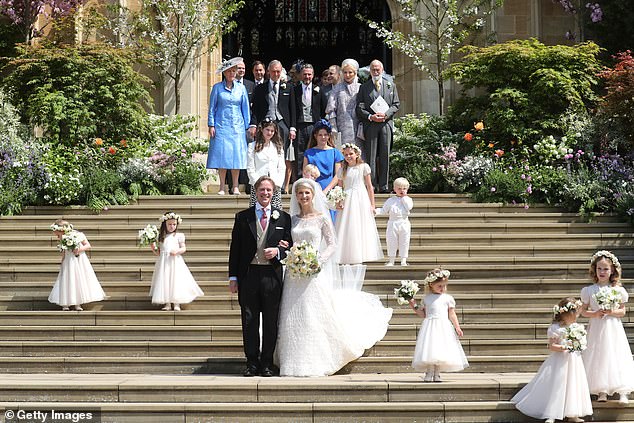 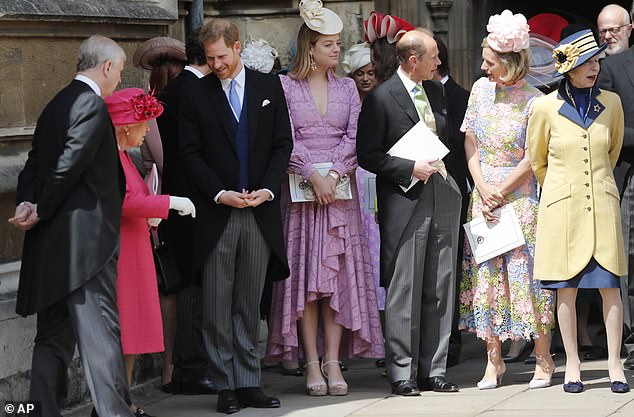 Lady Amelia Windsor joined other royals, including The Queen and Prince Harry at the royal wedding

The Queen stepped out of a car with Prince Philip as the Duke of Edinburgh made a rare public appearance following his retirement in 2017. Other royals at the chapel today included Sarah, Duchess of York with her ex-husband Prince Andrew and their daughter Princess Beatrice with her boyfriend Edoardo Marpelli Mozzi.

Philip appeared in good spirits and joked with the Dean of Windsor, the Right Reverend David Conner, who was waiting to greet the monarch. The Queen wore a pink A-line coat, and a lilac and pink silk dress by Stewart Parvin, with a matching hat by Rachel Trevor-Morgan.

Pippa Middleton, a long-time friend of Mr Kingston, and husband James Matthews smiled as they approached, along with her parents Carole and Michael Middleton.

James Middleton was also there, and walked into the chapel with his French girlfriend Alizee Thevenet.