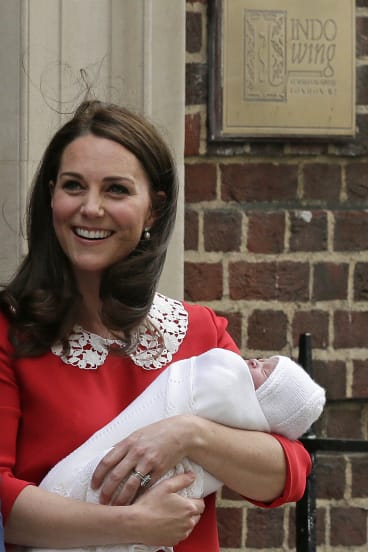 Kate, Duchess of Cambridge smiles as she holds Louis outside the Lindo wing at St Mary’s Hospital on Monday.

You would've noticed, because you're a switched-on consumer of global media, that the Duchess of Cambridge, Kate Middleton, was "delivered of a son" – Louis! – on Monday.

A mere six hours later, she appeared, babe in tow, Prince William at her left, to present the fifth in line to the throne. Sporting a slight bulge in her Diana-inspired dress, due to a distended uterus, Kate looked magnificent. Perfectly coiffed hair, smudge-free make-up, ankles that had never known the meaning of fluid retention.

And the internet went wild. We glanced quickly at the pink face in the swaddle, and then we opened our eyes in awe at his mother.

We demanded to know just exactly what sort of dark magic went down in the Lindo Wing. We then all comforted ourselves with the assumption that, as Kate has access to nannies and engages in a level of anaerobic exercise comparable to that of elite athletes, it's easy for her to "bounce back". Then we all swung around to scoffing in disbelief at her polished appearance and swift exit from hospital.

We then all pointed out to our frenemies on Facebook that, of course, she was going home – to servants and clean sheets and pelvic floor experts. Then we all fought with those smug idiots who said that they went home two hours after giving birth – in the backyard!

Then, we realised, that as perfect as Kate's appearance and general lifestyle might appear, she would still be wearing a maternity pad when she stepped out, ergo, she's a human woman after all. And then we all yelled at strangers on social media for being so judgmental of women and mothers in the first place.

But here's the thing: If Kate had stepped out, replete with compression stockings, hormone-affected skin, greasy bun and zero make-up, she would've been taken to task by the likes of Piers Morgan for letting the royal family down.

There would be the odious comparisons to Meghan Markle, and her imagined offspring, and UK tabloid headlines questioning if "Weighty Katie", though pure in her motivations, had finally bitten off more than she could chew with three.

Of course, the think pieces on women's websites about those accusations would immediately follow. But the damage,  to the House of Windsor and Kate's personal brand, of "cheerful trouper" would be done.

So you see, Kate can't win. As author and academic Heather Widdows writes in her book Perfect Me, adhering to near-impossible beauty standards can no longer be dismissed as a vain, superficial pursuit – these days, the woman who fails to conform is regarded as a failure as a person.

Widdows' observation was cited in a New York Times review of Amy Schumer's new comedy I Feel Pretty, a movie that received so much backlash from the trailer alone, Schumer has had to post endorsements from Oprah and Selena Gomez (the most followed person on Instagram) in order to combat the outrage.

And the rage is real. Women have claimed Schumer has no right to make a movie about being unattractive, given she is a normal-looking, white, blonde cis woman of average weight.

These women might be forgetting that Schumer was told by the producers of Trainwreck – the movie Schumer wrote – to lose weight for the movie or she'd "hurt people's eyes". They might be forgetting the critics who said that there was no way someone who looked like Schumer could get a guy as wonderful as Bill Hader (himself no supermodel, but hey, better than Schumer, apparently).

So Schumer had to find her own way, through the trolls and the reality of her employers demanding she stop eating, to properly accept her appearance. The movie reflects this personal journey.

And still, critics and consumers are left unsatisfied. Amanda Hess, writing for the New York Times, says the greatest lie in I Feel Pretty is the idea that it's only women’s lack of confidence that's holding them back from feeling beautiful; messaging that runs parallel to the Dove ads and the corporate culture surrounding "lean in" – it's not society preventing you from having it all, ladies – it's you!

But wait. So Schumer is supposed to make a movie in which she acknowledges her privilege: she is more gorgeous than most. But also, she's got to make sure she accepts herself for who she is, even though it's painfully clear to every female between the ages of nine and 90, that beauty is the clearest and quickest way to ascend to power.

Then, somehow – possibly in the third act I'm guessing? – Schumer is supposed to also admit that she will never be hot enough, because, as Hess writes, "the reality is that expectations for female appearances have never been higher."

We've arrived at a point where women are supposed to be imperfectly perfect, empowered, and hot, polished, but not too polished, super sexy babies who hate ourselves and love feminism.

We used to rail against the dichotomies we were once prescribed: Madonna /whore. Smart/ Hot. Funny/Thin. But those dichotomies have collapsed in on themselves, and like a cultural garbage compactor, they've flattened women into cardboard cut-outs of who we once were – ourselves.