Gayle King has never smoked weed before–but that’s all about to change if Amy Schumer has anything to do with it!

In her first appearance on The Ellen DeGeneres Show Tuesday, Gayle reveals that this plan all unfolded at Ellen’s 60th birthday party.

At the celebration (which Gayle calls “one of the best birthday parties ever”), she recalls revealing to Amy that she had “never smoked a marijuana cigarette.” Always joking around, the comedian replied, “Well we have to do something about that!”

Gayle then brings Oprah Winfrey into the conversation, revealing that her BFF “has also smoked a little marijuana.”

While Gayle makes it clear that she’s not against trying weed with Amy, she feels content without it. Simply put, she says, “I prefer to be high on life.” 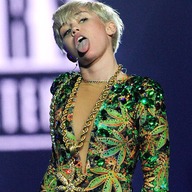 Revealing that talk-show titan likes her house guests to wear something specific when they come over, she gifts Ellen a colorful caftan with a photo of Oprah and her dogs on it!

The CBS This Morning co-host then discusses her new book, Note to Self, which is based on a popular segment from her morning show where they ask people to write a note to their younger self.

Gayle has clearly been inspired by the notes and the work she does on the show every morning, saying, “I’m so glad to be on the planet doing the jobs we do.”

The chat then turns to the royal wedding, which Gayle reveals she will be covering live for six hours!

With the event less than two weeks away, Ellen couldn’t resist gifting Gayle a jaunty fascinator to ensure she’s looking her best.

We can’t wait to see Gayle rock the fashionable hat at the nuptials on May 19th!