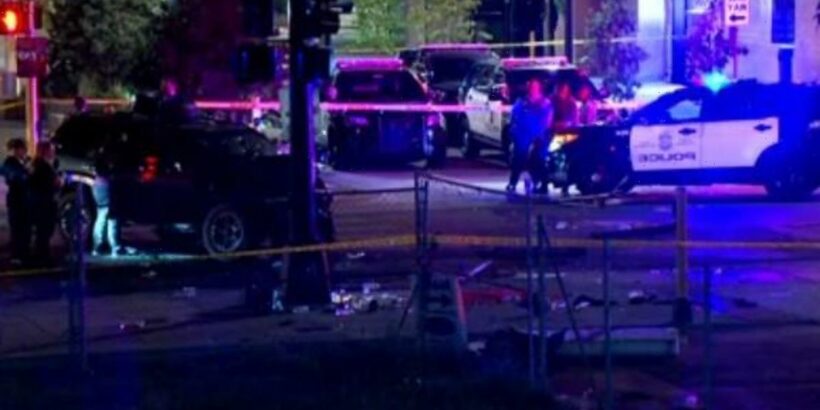 A vehicle drove into a group of protesters in Minneapolis late Sunday night, injuring two, and one of them later died at a hospital, police said. The motorist may have been under the influence of drugs or alcohol, according to investigators.

The demonstration was the latest in the Uptown neighborhood since a Black man wanted on a firearms possession charge was shot and killed there by law enforcement earlier this month.

Minneapolis police say the were monitoring the protest by camera when the vehicle hit the protesters. Angry demonstrators pulled the driver out and, witnesses said, started hitting him.

When officers got to the scene, they took the driver into custody and brought him a hospital for treatment of his injuries.

“Preliminary investigation indicates that the use of drugs or alcohol by the driver may be a contributing factor in this crash,” police said.

Winston Boogie Smith Jr., 32, was fatally shot June 3 by members of a federal U.S. Marshals Service task force. Investigators said Smith showed a handgun and may have fired it.

The statement from her lawyers contradicts the claims that Smith displayed a handgun before officers on the task force opened fire.

The Minnesota Bureau of Criminal Apprehension (BCA) has said evidence indicates Smith fired his gun, since a handgun and spent cartridge cases were found inside the vehicle.

The woman’s attorneys, Christopher Nguyen and Racey Rodne, said their client “never saw a gun on Winston Smith leading up to the shooting and she never saw a gun inside the vehicle – at any time.”

The attorneys didn’t release the name of the woman, who was on a lunch date with Smith. They didn’t elaborate on the nature of any physical injuries she received; authorities said the woman suffered injuries from broken glass as a result of the shooting.

Smith was killed as authorities were trying to arrest him on a weapons violation. The marshals service said he was wanted for allegedly being a felon in possession of a firearm.

The service said Smith, who was in a parked vehicle on the fifth story roof of an Uptown parking ramp, “produced a handgun resulting in task force members firing upon the subject.”

When asked to respond to the woman saying she didn’t see a gun, Department of Public Safety spokesman Bruce Gordon said the BCA stands by its earlier statement.

Smith’s shooting happened in a city that’s been on edge since the death of George Floyd  just over a year ago and the fatal shooting of  Daunte Wright by an officer in nearby Brooklyn Center in April.

Smith’s shooting sparked days of protests in the Uptown neighborhood. His family members and community members are demanding transparency.

Authorities have said there is no body camera or squad camera footage of the shooting.

In addition, the two task force members who fired at Smith – one a sheriff’s deputy from Ramsey County and one from Hennepin County – were working undercover so, authorities say, state law bars them from releasing their names.

Nguyen and Rodne said they hope commitments made by law enforcement to work toward more transparency and accountability since Floyd’s death “will be borne out through their actions as we work to shine a light on why Winston Smith lost his life … while on a lunch date.”

Jeff Storms, an attorney for Smith’s family, said the government has now heard the “people’s evidence” and the people deserve to hear the government’s evidence in the case.

“There is a lack of transparency by the lack of body cameras. We now ask for the government to come forward and show us what they have to support this narrative that they created … now (being) contradicted,” he said.

The BCA said it would release all public data when the investigation is closed. Until then, the agency said, state law bars it from releasing evidence or discussing an open and active investigation. After the BCA finishes its work, it will turn over its findings to a prosecutor for review.

The lack of body camera footage of the shooting has raised questions in Minnesota.

Activists also called for the removal of Minnesota officers from federal task forces and said the BCA shouldn’t be investigating, alleging there is a conflict of interest when police investigate police.

Angela Rose Myers, president of the Minneapolis NAACP, was among those demanding transparency and accountability.

Local officials say the deputies on the task force were assigned body cameras but were told by the U.S. Marshals Service that they couldn’t use them, despite an October change in Justice Department policy that would have permitted their use.