Andrew Garfield may no longer be Spider-Man, but he’s one step closer to an EGOT. Sunday, Andrew Garfield won Best Actor in a Play at the Tony Awards for Angels in America: Millennium Approaches and Perestroika at the top of the June 10 ceremony. His moving speech acceptance shone a light on the LGBTQIA+ community and the themes of the play.

Garfield was nominated alongside Denzel Washington for The Iceman Cometh, British character actors Tom Hollander (not to be confused with the other Peter Parker) for Travesties, and Mark Rylance for Farenelli And The King, as well as London theatre actor Jamie Parker, who plays one of the titular roles in Harry Potter And The Cursed Child Parts 1 and 2, #keepthesecrets. It’s Harry. He plays Harry.

In Angels in America Garfield plays Prior Walter, the de facto protagonist. Diagnosed with HIV/AIDS before the action begins, the character navigates his own mortality as well as as love, the very nature of progress, and a mysterious burgeoning spiritual presence.

"This disease will be the end of many of us," the character says in the play’s final moments, "but not nearly all, and the dead will be commemorated and will struggle on with the living, and we are not going away. We won’t die secret deaths anymore. The world only spins forward. We will be citizens. The time has come. Bye now. You are fabulous creatures, each and every one. And I bless you: More life. The Great Work begins." 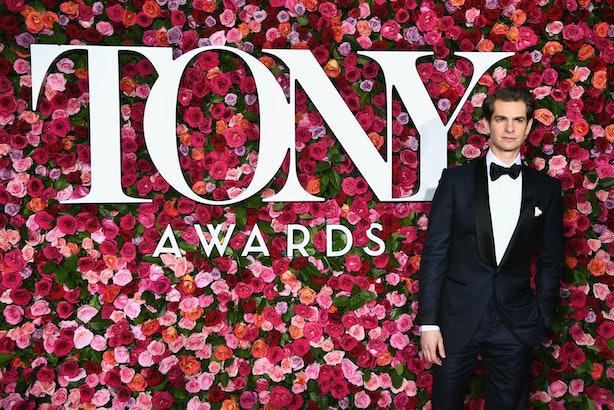 The role was originated on Broadway by Stephen Spinella and has been played in various professional productions by Stephen Dillane (who you know as Game Of Thrones’ Stannis Baratheon), Broadway’s Christian Borle, and former Weeds star Justin Kirk in the HBO miniseries adaptation. This 2018 production started at the National Theatre in London and moved to Broadway with much of the original cast, including Garfield.

This is Garfield’s second Tony nomination; he was up for the spinning trophy in 2012 for his performance in Death Of A Salesman. However, it will take a while before Garfield actually EGOTs. The actor was nominated for an Academy Award in 2017 for Hacksaw Ridge and has never been up for a Grammy or an Emmy. Still, a Tony is a great first step and he is now officially a contender. This is what he said when he took the stage:

The final part was, of course, in reference to the recent Supreme Court decision that ruled in favor of a bakery that refused to bake a cake for a gay wedding.

It’s no surprise that the Angels in America star’s speech was moving and dedicated the the work and the human spirit, as Garfield has truly embodied the character he plays and become an expert in Kushner’s epic. Christine Amanpour recently had the playwright and current star sit down to discuss the production together.

Congratulations Garfield! He’s come a long way since getting excited and scared by the cast of Godspell in 2012 (above).