The Andrews government is ramping up efforts to build massive, publicly owned offshore wind farms as Victoria prepares to end its 100-year reliance on brown coal for electricity generation.

But some experts have questioned whether this is the best approach, with other forms of technology, including solar and onshore wind, potentially able to deliver power at a lower cost. 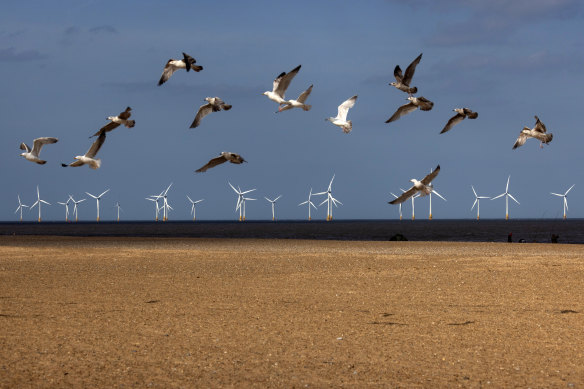 In Australia, it’s early days for offshore wind but the momentum is building.Credit:Bloomberg

After this week announcing a plan to revive the old State Electricity Commission, which was carved up and sold off by the Kennett government in the 1990s, the state government on Friday attempted to flesh out its plan to make Victoria “the home for the offshore wind industry in Australia”.

The plan includes redeveloping the Port of Hastings as a hub to manufacture, assemble and research offshore wind turbines, and setting up a new government agency called “Offshore Wind Energy Victoria”, which will act as a “one-stop shop” to accelerate the switch to offshore wind.

“We now have a once-in-a-generation opportunity to replace dirty coal that is privately owned for profit with clean renewable energy that is owned by every taxpayer,” he said on Friday.

The government is planning to generate at least 2 gigawatts of power from offshore wind by 2032, about 20 per cent of the state’s total power and enough to power 1.5 million homes. But this is expected quickly to double to 4 gigawatts by 2035, and then more than double again to 9 gigawatts by 2040.

The offshore wind push, which the government claims will create 59,000 jobs by 2035, is seen as less politically risky, minimising the risk of a backlash from local communities who may be reluctant to accept large-scale onshore wind. But it will also be comparatively expensive.

The CSIRO’s latest GenCost report, released in July, shows renewables are, in a broad sense, by far the cheapest “new-build” electricity generation option in Australia.

After factoring in construction (capital) costs and running costs, it estimated offshore wind power is likely to cost about $127 per megawatt hour by 2030, compared with just $54 for onshore wind energy.

Australia does not yet have an operating offshore wind industry. But the report said costs for both offshore and onshore wind power had fallen faster than expected.

“Offshore wind is yet to be developed in Australia, however, cost reductions achieved overseas mean that Australian projects are expected to be lower cost than previously expected”.

Nuclear power remains the most expensive option, while gas and coal power is also comparatively expensive.

On Friday, the government also released an “Offshore Wind Implementation Statement”, suggesting that Victoria is facing major costs connecting and transmitting offshore wind power into the grid. It said the government would build a transmission connection points for the state’s offshore wind farms near the Gippsland coast, east of Wilsons Promontory, and at Portland.

But the government will be stipulating that offshore wind farms will be forced to connect underground to those connection points “as a condition of the Victorian government’s procurement process”.

Energy market economist Tristan Edis said Victoria was in danger of overestimating the difficulty of the task it faced transforming the grid and cutting emissions. He suggested the economics of offshore wind in Australia was less compelling than in Europe, because of a relative abundance of windy land.

“Australia is different to Europe”, he said. “We still have a lot more high-quality wind resources, on shore, that are not yet exploited, and so the cost or the output advantage from going offshore in Victoria is not as big as what it is in Europe.”

The Grattan Institute’s energy program director Tony Wood has also warned that the government’s plan will require major investment in new transmission and storage, which will undermine the benefits of lower cost renewables.

“We have to find ways of building the unsexy but crucial part of the clean energy system: transmission and storage. There’s a lot to build in a short time and the cost will tend to offset the low cost on the renewable generation,” Wood wrote in the Conversation this week.

“This poses serious risks. Rural communities are almost guaranteed to push back on large new transmission lines. They may well be in favour of clean energy, but they don’t want big new power lines.”

Meanwhile, Opposition Leader Matthew Guy has suggested the most important thing to bring down energy bills is to increase the supply, promising to ramp up efforts to tap onshore gas.

“We can achieve that by bringing gas into the mix,” Guy said on Friday. “That’s why we’re looking at extra gas supplies across regional Victoria to be availed.”