An Iranian Angelina Jolie ‘lookalike’ who claims to have had 50 surgeries to make her look like a ‘zombie’ version of the Oscar-winning actress has shared a shocking new selfie.

Sahar Tabar, 20, from Tehran, used her photoshop skills to upload an eerily gaunt selfie on Instagram on Wednesday, which appeared to show her with alarmingly thin arms and hollow cheeks.

The picture showed her dressed in black, wearing pale blue contact lenses and showing off her exaggerated nose and lips while holding up.

But while some fans were left horrified by the snap, others slammed Sahar’s ‘unfortunate’ photoshop skills. 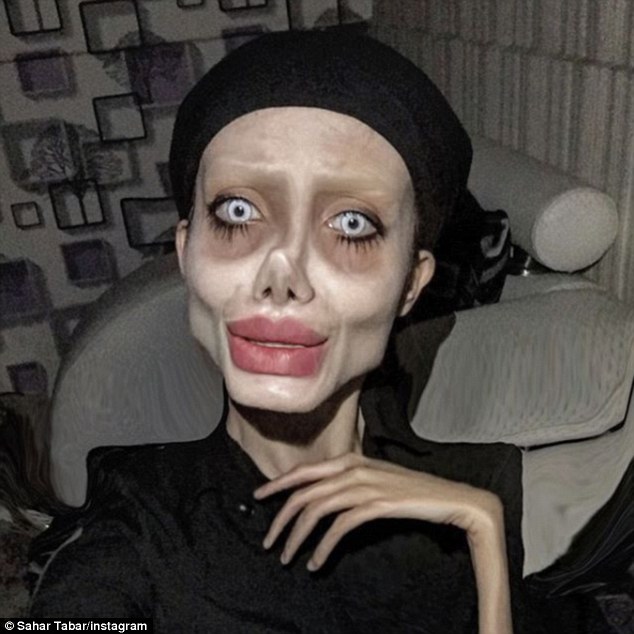 Iranian Angelina Jolie ‘lookalike’, Sahar Tabar, 20, from Tehran, who caused controversy after admitting to having 50 surgeries to make her look like a ‘zombie’ version of the Oscar-winning actress has managed to shock fans again with a new selfie

Racking up almost 17,000 likes, one folllower commented: ‘Oh god monster!’ while another added: ‘The photoshop is unfortunate’.

But others praised her look, with one remarking on her likeness to the Tomb Raider star, writing: ‘Young juvenile Angelina’.

And followers couldn’t decide on her editing skills, with one writing: ‘At least you’re a Photoshop professional’, while another claimed: ‘Photoshop level: beginner’.

Sahar uploaded an eerily gaunt selfie, which appeared to show her with spookily thin arms and hollow cheeks, and people quickly slammed it as ‘terrifying’

In July Sahar unveiled her former appearance for the first time, sharing a side-by-side snaps of her pre and post surgery.

The Instagram star, who boasts 359,000 followers, hit headlines last year when it was reported that she’d had 50 surgeries to make her look like a ‘zombie’ version of the the Oscar-winning actress.

She later spoke out, admitting she’d had a nose job, lip fillers and liposuction but insisted most of her unusual appearance is down to make-up and editing.

And followers couldn’t decide on her editing skills, with one writing: ‘At least you’re a Photoshop professional’, while another claimed: ‘Photoshop level: beginner’.

In one snap she has long dark hair, brown eyes and much smaller lips, while in her Angelina snaps she wears wears blue contact lenses, has a very pointed nose and sunken cheeks.

Speaking to Russian media outlet Sputnik last year, Sahar admitted she’d had surgery but denied it was 50 procedures or that her intention was to look like the Hollywood star. 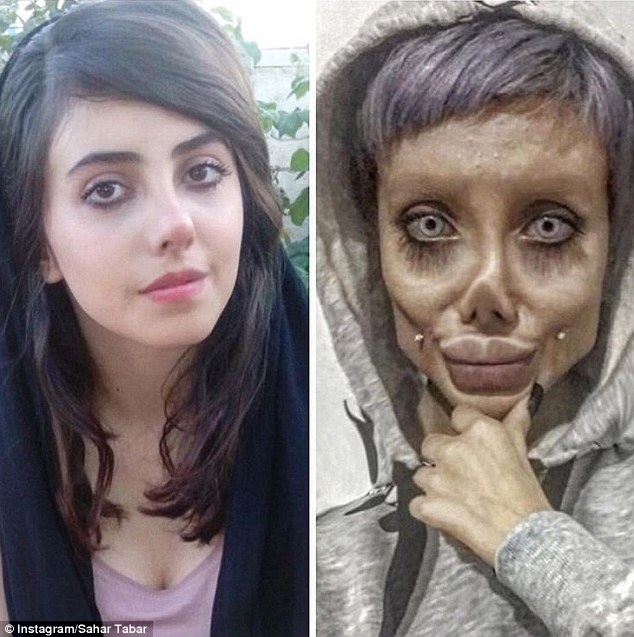 Sahar Tabar, now 20, from Tehran who hit headlines with her bizarre transformation into Angelina Jolie showed her real face (left) for the first time last month 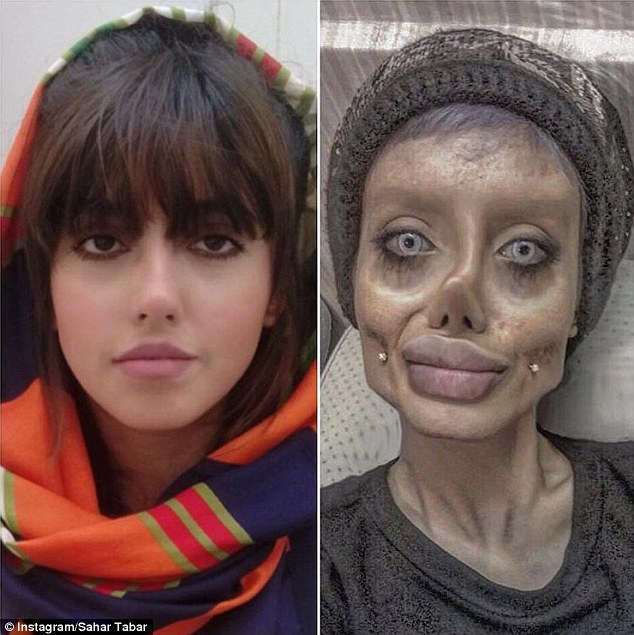 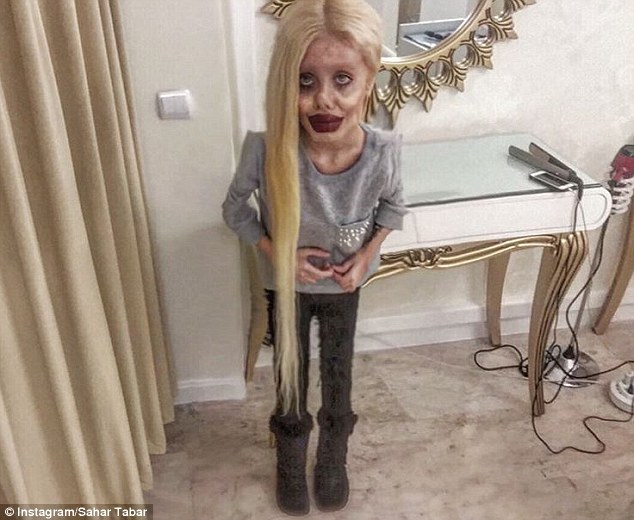 Followers have criticised her appearance, saying she looks like a ‘zombie’ version of the star

She said: ‘I did not even think about being like Jolie. Also, I did not want to resemble the cartoon character the Corpse Bride.

‘Now I understand that I have something to do with them, but I am a muse myself and remembering someone is not an end in itself.’

Eagle-eyed Instagram followers have commented that she makes clever use of Photoshop and make-up, and Sahar confirmed that this was the case. 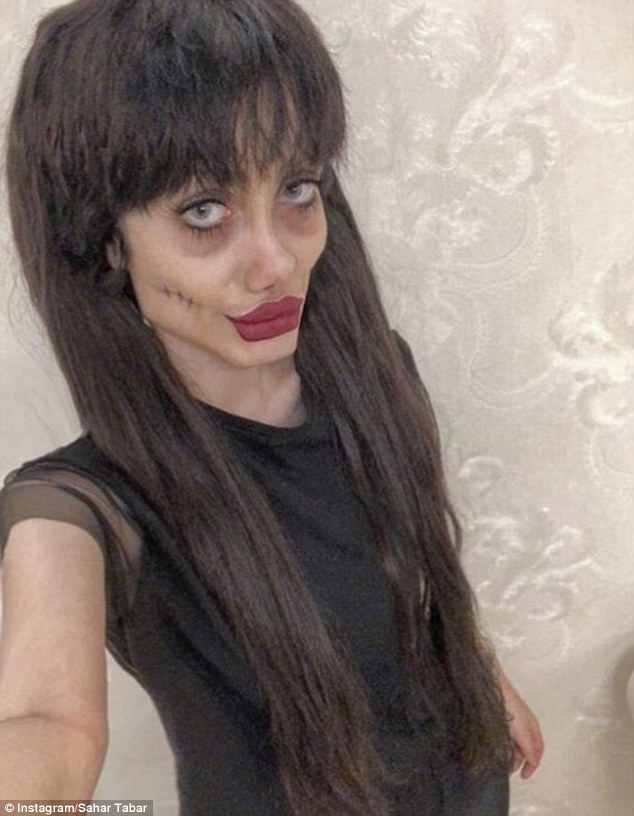 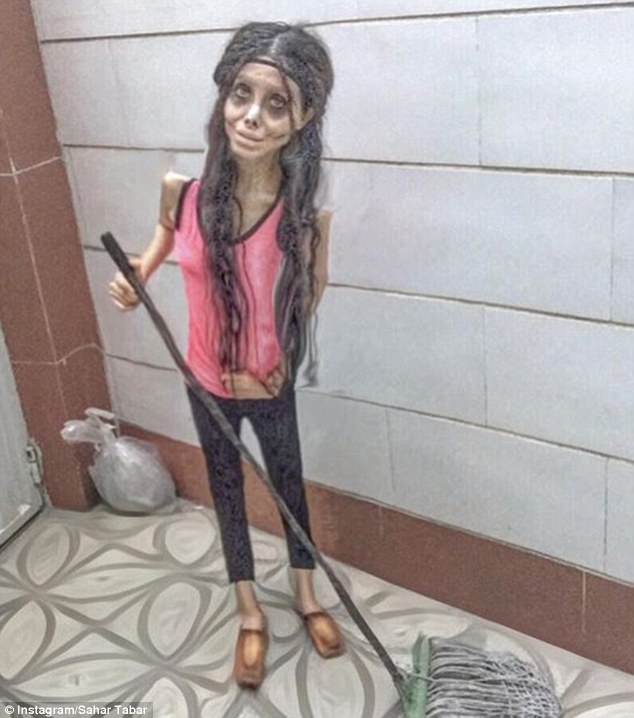 She told Sputnik: ‘This is Photoshop and makeup. Every time I publish a photo, I paint my face in an increasingly funny way. It is a way of expressing yourself, a kind of art. My fans know that this is not my real face.’

She explained that her look was like an ‘art’ project and a form of self-expression.

In another Instagram post, she wrote: ‘The picture that you’re scrutinizing, even though I didn’t like it, I kept it in… I must say I only had [indeterminate number of] surgery, not 50 surgeries…

I thought these people are probably living in the 18th century and they haven’t seen or heard of technology or makeup and they are really surprised.’ 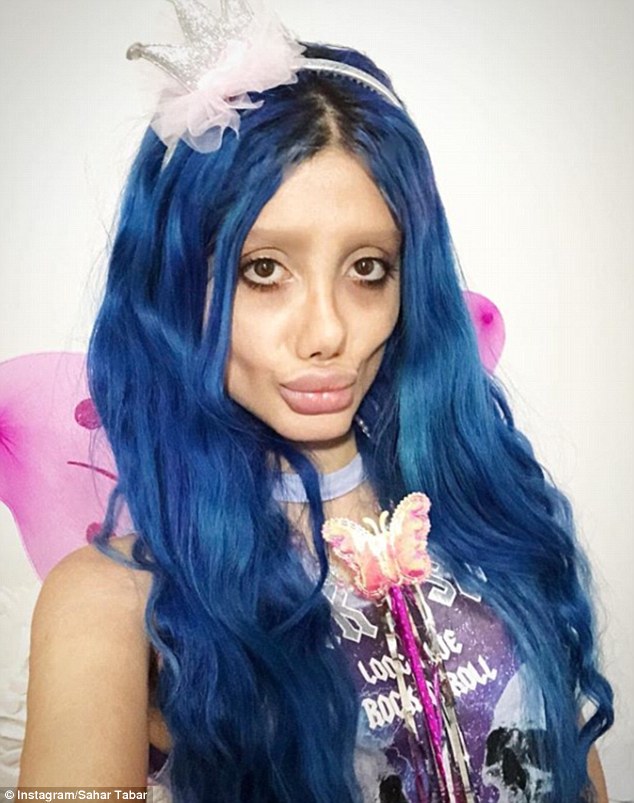