Crumbs! Apple crumble is named as Britain’s FAVOURITE pudding while a loathed school dinner dessert is the most hated… so do you agree?

Britain is famous for its stodgy puddings and now the people have spoken to announce which one is their favourite.

Sweet-toothed foodies have named a traditional apple crumble as the nation’s favourite dessert in a poll by glossy Olive Magazine.

The pudding, which is typically a bowl of baked cinnamon-spiced apples with a crumble mixture on top made from fat, flour and sugar, topped the vote – while despised school dinner treat tapioca was named as the most hated British dessert.

So do you agree with the findings? 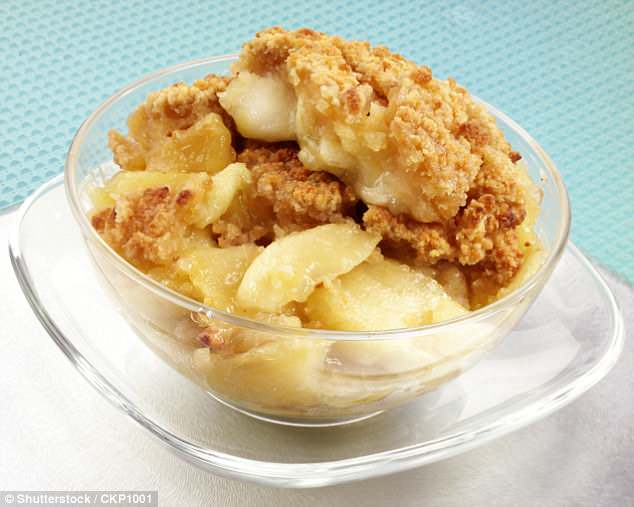 Apple crumble is typically a mixture of baked apples on the bottom flavoured with cinnamon and sugar topped with a crispy crumble mixture made of flour, fat and sugar

Apple crumble was crowned Britain’s favourite pudding after winning 18 per cent of a vote by more than 1,400 people.

Tapioca was voted the most hated pudding in Britain after 33 per cent they disliked the relative of rice pudding, while divisive Christmas pudding and banoffee pie were joint second most hated. 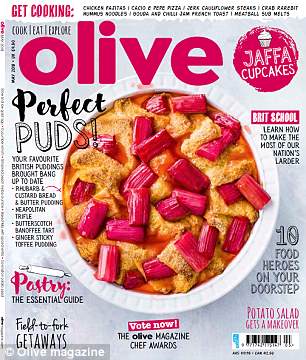 The May issue of olive magazine is on sale now

Eton Mess meanwhile was voted the most appropriate British pudding to serve at the royal wedding on May 19 by a quarter of readers, ahead of summer pudding and lemon meringue pie.

Laura Rowe, editor of Olive Magazine, said: ‘To celebrate our annual British issue we wanted to discover what our nation’s favourite traditional British puddings were – and the results prove that the nation isn’t quite ready to let go of carbs, just yet.

‘They want hearty, rib sticking desserts, every time, and it was this that inspired our ingenious mash-up front cover, a rhubarb and custard bread and butter pudding. It really does taste as good as it looks.’ 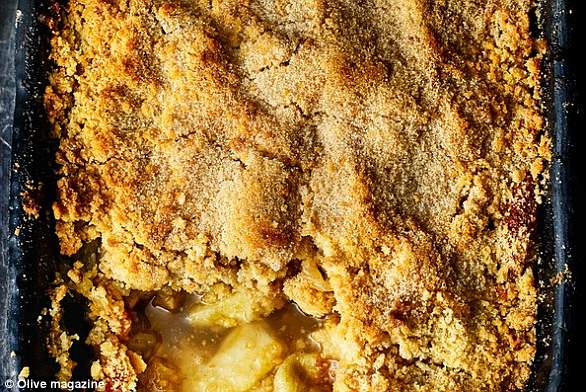 Custard or ice cream to serve

1. To make the crumble, put the flour and butter in a food processor and pulse to rough breadcrumbs. Stir in the sugar and a big pinch of salt.

2. Heat the oven to 190C/fan 170C/gas 5. Cut the apples into quarters and remove the cores. Thickly slice and toss with the lemon juice, 150g of the sugar and the cinnamon. Put the apples in an ovenproof dish and scatter over the crumble mix, spreading it evenly. Sprinkle over the rest of the sugar.

3. Bake for 40 minutes or until golden on top and bubbling around the edges. Serve with custard or ice cream.

The May issue of olive magazine is on sale now featuring other great British puddings reinvented or see more at olivemagazine.com.