Are these the best McDonald’s hacks EVER? The fast food chain’s secret menu tricks revealed – including how to buy a Big Mac and fries for just £1.99

McDonald’s secret menu is legendary amongst dedicated visitors of the fast food chain as it offers customers a way to customise and supersize their orders.

Now even more off-menu delights have been discovered, as well as a few tricks of the trade that can allow visitors to buy food at even cheaper prices.

The most recent McDonald’s hack, which went viral this week, allows customers to order a Big Mac and fries for half price at £1.99 over and over again.

All diners have to do is make one small purchase, such as a 59p Mini McFlurry, and then receive a receipt which will offer you the meal deal if you fill in a short customer feedback survey online. 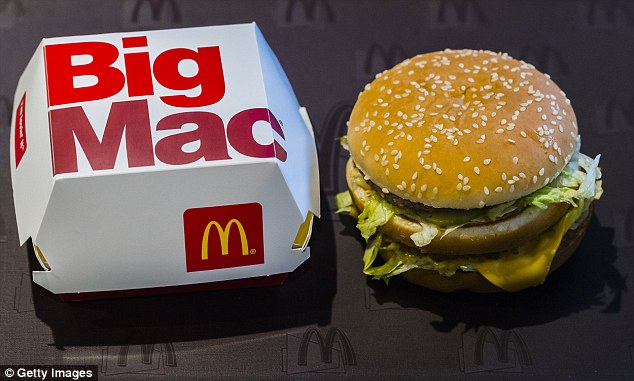 McDonald’s secret menu is legendary and most people believe they know every item they could order off the off-menu list but in fact, diners are coming up with new and inventive customised orders all the time

You can then use the trick again and again by filling in the survey every time you receive a receipt after buying your £1.99 Big Mac with fries.

There are other tricks to discover at the fast food giant, as obsessives on Instagram have discovered, Cosmopolitan.co.uk reports.

Here are some of the best hacks to try out at your local branch – including a chicken and beef burger in one, and how to make your own ice cream sandwich. 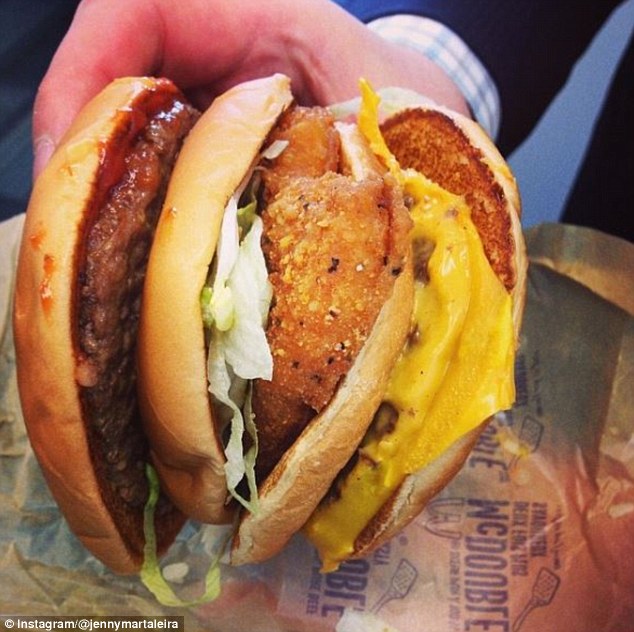 This McDonald’s diner discovered a new hack where you can combine a £2.59 McChicken burger with a £1.55 Double Cheeseburger to create a hybrid of the two. Simply order the two burgers separately and then stuff the McChicken burger between the two beef patties. It will cost you £4.14 in total 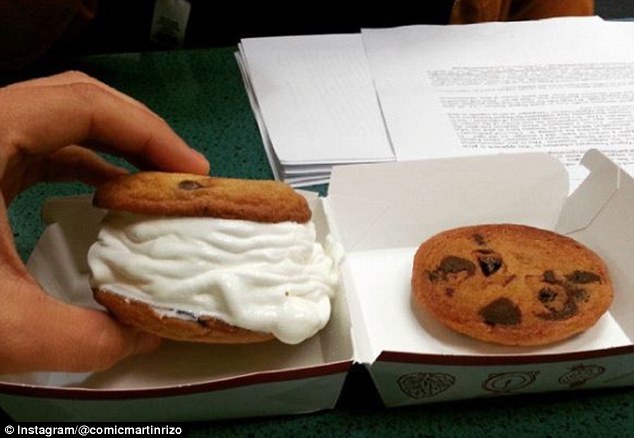 This may not work at every branch but this diner managed to order a custom-made McDonald’s ice cream sandwich by buying two cookies and asking for a cup of McFlurry ice cream on the side. He then assembled it by filling the two biscuits with the ice cream. The hack would cost £2.97 as each item costs 99p Blogger Kate from Kates Food Adventures discovered this ultimate hangover cure hack where you order a Double Sausage and Egg McMuffin and a hash brown on the side, and then stuff the burger with the hash brown for a delicious breakfast treat 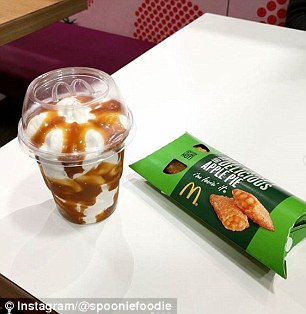 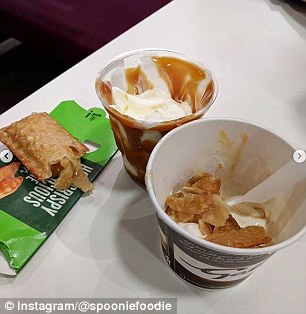 This blogger discovered that you can create a delicious apple tart-inspired dessert at McDonald’s by mixing together the chain’s 99p Apple Pie and and its 99p Toffee Sundae, costing £1.98 (left). However the diner said the trick works best if you let the apple pie cool down slightly before combining (right) 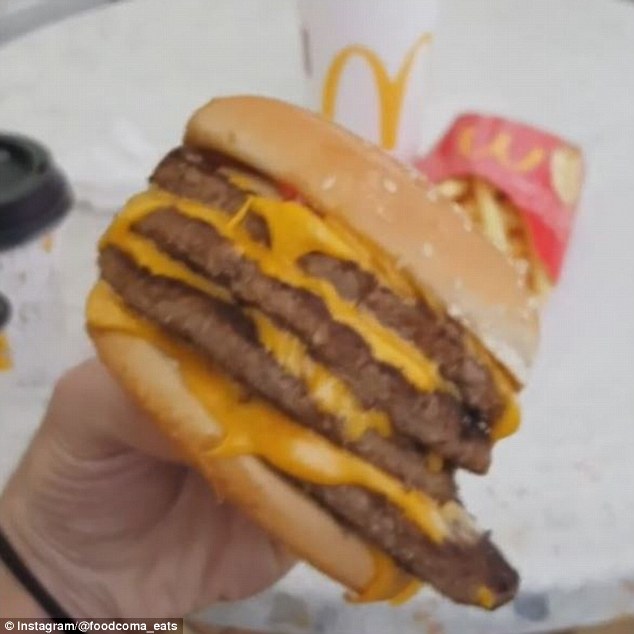 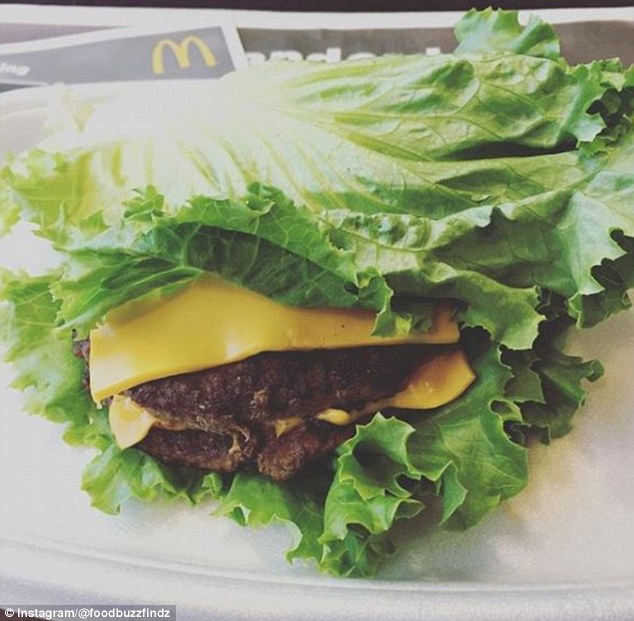 McDonald’s food isn’t known for being that healthy, but those who follow a no-carb keto diet can lessen the damage by swapping the bun for extra lettuce at the fast food chain and wrapping the burger’s patties inside 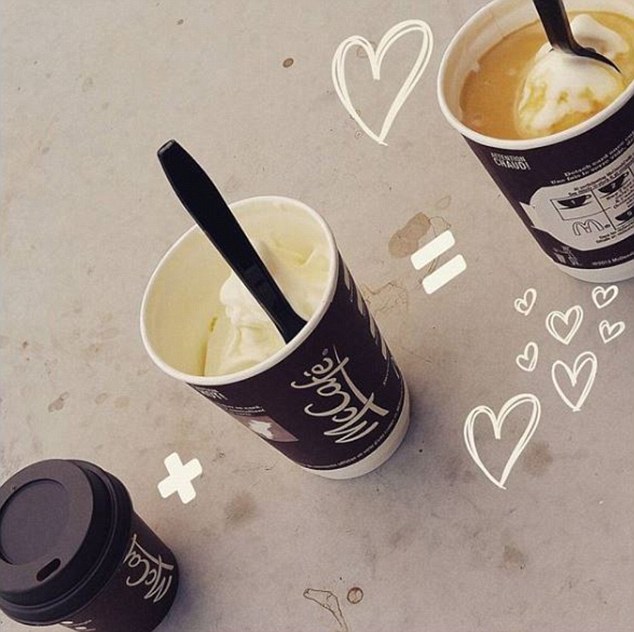 Affogato is a classic Italian dessert that combines espresso with a scoop of vanilla ice cream or gelato. Now diners have discovered you can make the treat even at McDonald’s by buying a 79p espresso shot, a 99p McFlurry and then combining the two 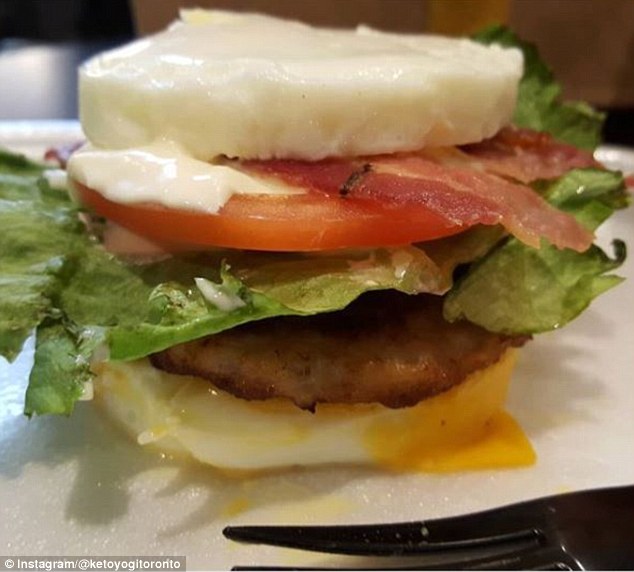 This healthy eater wanted to stick to her low-carb keto diet while feasting at McDonald’s so swapped the bun for an extra slice of round egg when ordering a £2.19 Sausage and Egg McMuffin. She then used the slices of egg as the bun, and added bacon to make it an ‘egg BLT’ 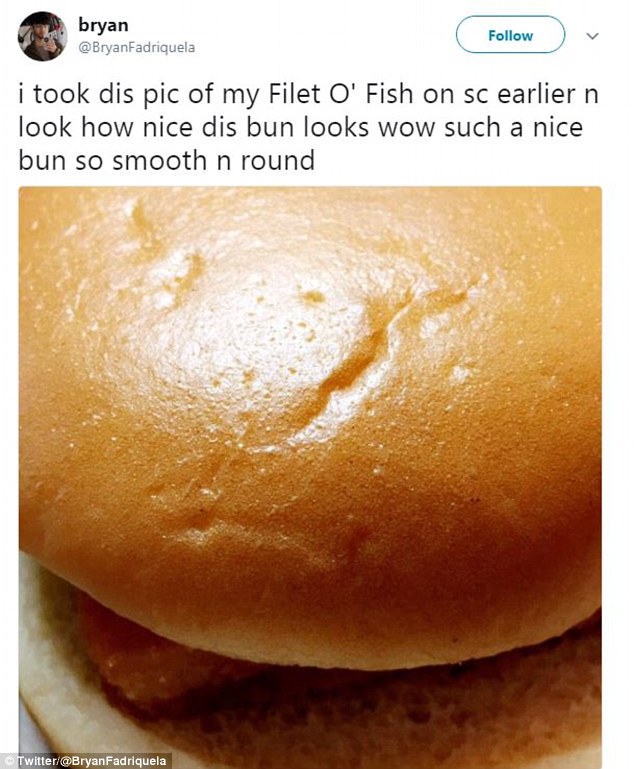 Some McDonald’s diners like swapping the usual burger bun for the steamed bun that comes with the Filet-O-Fish burger, which some customers say is softer and smoother. It’s not clear if you would have to order the Filet-O-Fish as well as your normal order to achieve the hack or if you can just ask staff to swap the buns 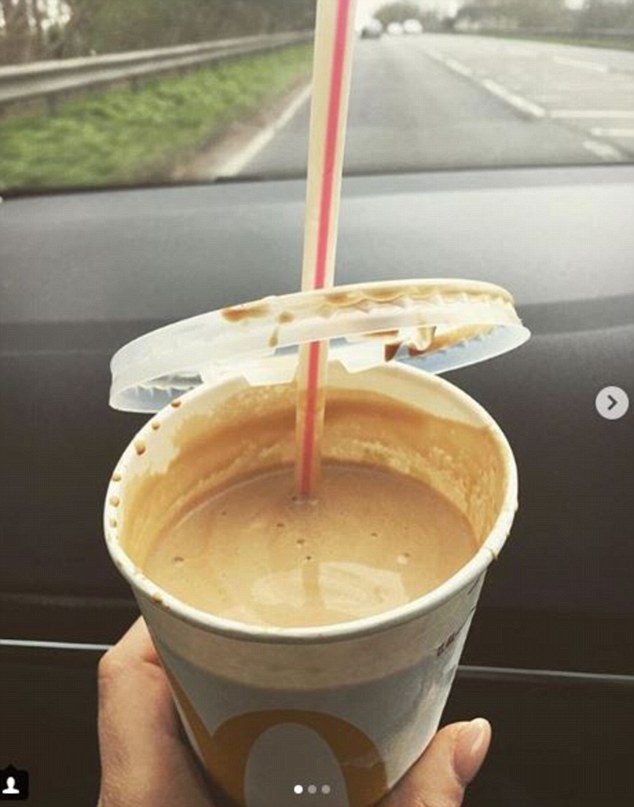 You can create your own iced coffee milkshake by tipping a shot of 79p espresso into either a £1.59 vanilla or chocolate milkshake (pictured) for a caffeinated, indulgent treat

SO WHAT’S ON THE NOT-SO-SECRET SECRET MENU?

According to the Hack the Menu team, the burger is ‘enough to satisfy a few people with hearty appetites or one hungry lumberjack’ and can be ordered from any McDonalds for $6.49.

The two Cheeseburger meal – Does what it says on the tin, if you ask for this you can expect an extra cheeseburger alongside your fries and drink.

The All American- This simple offering consists of nothing more than a toasted burger bun containing a beef patty, ketchup and the often shunned gherkin. The snack is said to be one of the most popular items on the secret menu.

Fries with Big Mac sauce – Customers can simply ask for a small pot of the famous Big Mac secret sauce to dip their fries in, and, according to Hack the Menu, it’s usually free.

Grilled cheese- This is easily the most basic of the secret menu choices. A hamburger is stripped bare aside from the cheese and is then grilled. HackTheMenu.com urges the importance of getting it grilled.

The Land, Sea and Air burger – This enormous burger combines all three of McDonald’s most favored patties including two beef burgers, a Fillet-O-Fish and a McChicken combined with however many buns you wish. However, Hack the Menu warn you will probably have to assemble it yourself.

The McGangBang – The somewhat crudely named McGangBang is said to be the most famous of the secret menu items. It combines a McDouble with a McChicken sandwich and sandwiches the two together.

The Neapolitan Shake – The three flavoured shake is one of the few beverages on the McDonald’s secret menu. The shake blends the three classic flavours of vanilla, chocolate and strawberry in on cup to satisfy all cravings.