Fantastic Beasts and Where To Find Them introduced Grindelwald to audiences for the first time as a young(ish) man. Though he’d turned up once in the Harry Potter novels, Grindelwald was more of a has-been, a forerunner to the real evil of Voldemort. But seeing him in his prime has reminded audiences of just how alike the characters are in some ways. Are Voldemort and Grindelwald related? The truth is, they’re probably not. (Though considering how much J.K. Rowling is seemingly rewriting the past, this could change.) But it is striking how similar their beliefs and aims are in both stories.

Regarding his family, Tom Riddle is a Muggle on his father’s side and a Gaunt through his mother. The Gaunts are an old wizarding family, tracing their lineage back to Salazar Slytherin, one of the four founders of Hogwarts, back in the 900s. (Riddle’s ability to open the Chamber of Secrets confirms this.) As far as their family tree branches go, some Gaunts were in Ireland and crossed the Atlantic to America. But as far as anyone knows, there’s no German/Russian connection.

Meanwhile, fans know Grindelwald was born in either Germany or Russia, and as befitting someone of his descent, he was invited to be educated at Durmstrang. He did travel to the UK and met Dumbledore in 1899, or so. But his family isn’t related to English wizards.

This is an important point because the difference in upbringing reflects how different Grindelwald and Voldemort are. On the outside, Voldemort and Grindelwald have much the same aims. They both wish to put Wizarding kind in charge, oppress and commit genocide against Muggles, and generally install a magical fascist state overseeing the globe.

But Grindelwald is far more aware of wizarding history and bases his idea of ruling from a more intellectual perspective. He’s a literary monster, the type that reads Tales of Beedle The Bard and sees wizarding supremacy between the lines of the fairy tales. He considers the Deathly Hallows and the Elder Wand to be the key to his power. 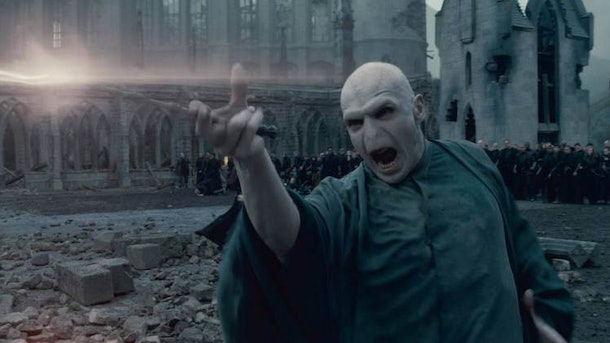 Voldemort is, to put it bluntly, more narrow-minded about his power aims. Tom Riddle doesn’t read highfalutin writings or go in for the sort of intellectual stimulation that draws in a lonely nerdy kid like Albus Dumbledore. He’s obsessed with his lineage, his legacy, his purity. His status as the heir to the Slytherin name inspires him to rule.

Consider this: Voldemort doesn’t even learn of the existence of the Elder Wand until late in the Potter books. Once he does, he only wants it for power, not caring about some silly Deathly Hallows fairy tales. When he visits Grindelwald to find out where it is, the man sneers at Voldemort as some pale noseless fool who barely has any soul left to speak of, saying:

Had Voldemort more intellectual curiosity, he could have learned more from Grindelwald and carried out what the older wizard failed to finish. Perhaps Muggles and Wizards alike should be thankful the two of them are not related.