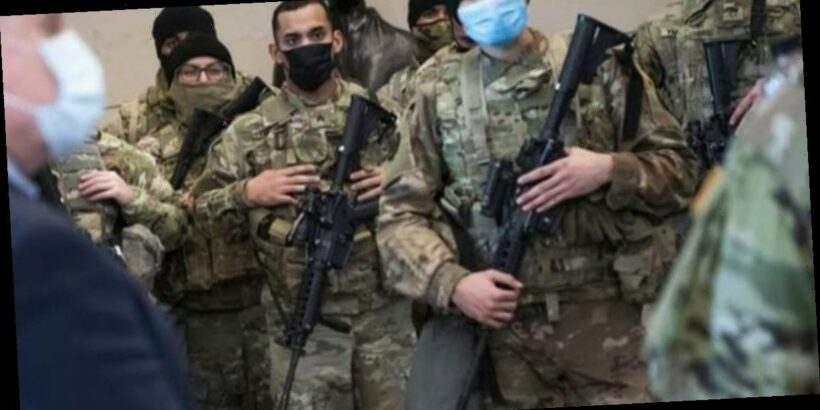 A group that has been planning since November to have armed rallies in Washington, D.C., as well as state capitols, intends to carry out its events Sunday, despite an unprecedented effort to secure the Capitol.

In the days since supporters of President Donald Trump stormed the Capitol in a violent riot that left five dead, officials have installed a massive security apparatus around the complex, where President-elect Joe Biden will be sworn in on January 20. The FBI warned law enforcement this week about a group calling for its supporters to come to Washington, D.C., and state capitols armed at their “personal discretion.”

That particular call for armed protesters dates back to a November 24 posting on a website called Tree of Liberty, an online forum for members of the extremist anti-government Boogaloo movement. The online flyer posted that day noted that the “Armed march on Capitol Hill and all state capitols” was planned for January 17 and was intended to be peaceful, but encouraged participants to “come armed at your personal discretion.” In a follow-up posted four days after rioters breached the Capitol — including some who prosecutors now say were intent on harming the Vice-President and other elected officials — the group wrote that its protest was in “pending status given the events that have taken place.”

But in an email to CBS News Friday, an administrator for the website wrote that the group now intends to carry on as planned. CBS News had reached out to an email address listed on the Tree of Liberty website as being the group’s press contact.

“The 1/17 events will continue, and safeguards are in place to assure that nothing violent happens concerning the Boogaloo Boys. I cannot speak on behalf of the Proud Boys or MAGA people, and we made it clear that we’d rather not see them there,” the press contact, who did not identify themselves, said. The Proud Boys are another group of far right supporters of President Trump.

The Anti-Defamation League, an advocacy group, describes the Boogaloo movement’s ideology as “primarily anti-government, anti-authority and anti-police in nature.” Since 2019, members of the group have participated in “rallies around gun rights, pandemic restrictions and police-related killings,” according to the ADL.

The Justice Department described the Boogaloo movement as a  “loosely-connected group of individuals who espouse violent anti-government sentiments”  in a December 16, 2020 press release announcing that a Boogaloo member had entered a guilty plea to conspiracy to provide material support to Hamas, designated a terrorist organization by the U.S. government. Another member of the group has been charged in that case and entered a not guilty plea.

In June 2020, a U.S. Air Force Sergeant was arrested for the shooting deaths of a Federal Protective Services officer and a Santa Cruz, California sheriff’s deputy. When he was arrested, investigators discovered slogans written in his own blood that linked him to the Boogaloo movement, according to a federal complaint.

In the days before the inauguration, about 25,000 troops will be stationed in and around the Capitol, alongside patrols by the Washington, D.C. Metropolitan Police Department, the Capitol Police and law enforcement from cities around the country.

In far right chats and forums on Telegram, MeWe and Discord — all popular platforms for both open and invite-only extremist discussion — users have warned each other against participation in the January 17 protests. Many have accused organizers of helping federal officials stage a “trap.”

The Tree of Liberty administrator said the group has in fact been in touch with federal law enforcement, despite its anti-government ideology.

“We have made it very clear that we are working with authorities to pick out anybody who has plans to do anything violent and ensure that they are intervened with before the event,” they said.

“Don’t get me wrong, if I had the choice, I’d not want to be involved with Law Enforcement. I no longer have that option. I was doxxed, and now I either comply or I go to prison,” they said. “Doxxed” refers to a practice in which a person’s private or personal identifying information is published on the internet by strangers in an attempt to encourage harassment.

The FBI declined to respond to questions about the claim that its investigators have been in contact with Tree of Liberty.

A company that hosted servers for the Tree of Liberty website shuttered it Wednesday. Those who try to visit the site are now automatically forwarded to a YouTube page that plays a music video of Rick Astley’s “Never Gonna Give You Up.”