Army chief Rick Burr has reassured the tens of thousands of troops who served in Afghanistan their legacy in Australia’s longest war is not tarnished by the misconduct of a few special forces members accused of war crimes.

Lieutenant-General Burr’s Anzac Day message comes as troops who have left the Defence Force tell Veterans Affairs Minister Darren Chester they don’t want to be seen as “broken and busted”. 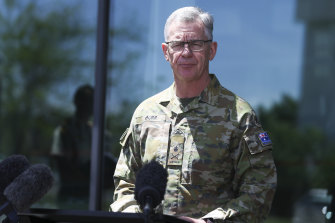 Chief of Army Lieutenant-General Rick Burr says Australia will continue to promote stability in Afghanistan to preserve the gains it made over the past two decades.Credit:Alex Ellinghausen

Australia will withdraw its remaining 80 military personnel from Afghanistan by September after 20 years of involvement in the conflict. Prime Minister Scott Morrison’s announced the drawdown after US President Joe Biden decided to pull out American forces by the 20th anniversary of the September 11 attacks that prompted the war.

More than 39,000 Australian Defence Force members served in the conflict, during which 41 died.

Recently, allegations of war crimes by Australian special forces in Afghanistan sparked a wide-ranging review. The Office of the Special Investigator established to determine whether charges should be laid expects it won’t start its investigations for another two or three months.

Defence Minister Peter Dutton stepped in this week to stop thousands of SAS soldiers from losing a meritorious unit citation, saying the 99 per cent should not be punished for the sins of a few. This overturned the decision of Chief of the Defence Force Angus Campbell and the recommendation from the four-year inquiry conducted by Justice Paul Brereton.

Lieutenant-General Burr said Australia would continue to promote stability in Afghanistan to preserve the gains it had made over the past two decades.

“Many of you contributed to these gains and please be assured the work you did is not tarnished by the alleged serious misconduct of a few,” he said.

All army members shared a proud legacy and should be confident they were “well supported and respected by your fellow Australians”.

The Army chief also urged the Defence community to use Anzac Day to “take time to reach out and support each other, to talk to mates and families of our fallen”.

Mr Morrison this week called a royal commission into Defence and veteran suicides to run alongside an ongoing national commissioner. Between 2001 and 2018, 465 Australians who served in the armed forces died by suicide.

Mr Chester has spent two days since in Townsville meeting veterans, families and the Defence community to discuss what the royal commission should encompass.

With the Afghanistan announcement fresh in their minds, the point was made to him that such conflicts had a “long tail” and support services must be available in the longer term.

“The community is keen to work together to provide a mood of hope and confidence rather than presenting an image to the Australian people that all veterans are broken or busted,” Mr Chester said.

Many were “keen to highlight the areas where they think there’s room for improvement” including the need for better links between government and ex-service organisations and greater support for those transitioning to civilian life.