Viewers tuning into the semi-final episode of the Big Painting Challenge said they were left feeling ‘uncomfortable’ at the ‘bitchy’ way the judges attacked the work of the amateur artists competing to win.

The latest installment saw judges Daphne Todd OBE and Lachlan Goudie branded ‘cruel, brutal and unnecessary’ by those watching at home as the sharp-tongued duo let rip at the contestants vying for a place in the show’s grand final.

At one point, Todd told the contestants they’d all ‘failed’ in their work when it came to the task of observing how gymnasts moved around the floor, leaving some of the amateur artists close to tears at the feedback. 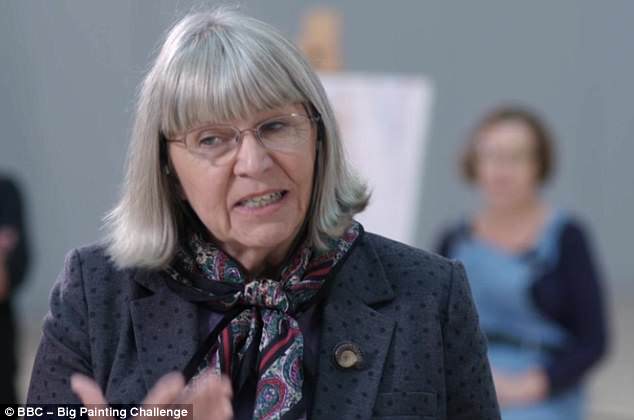 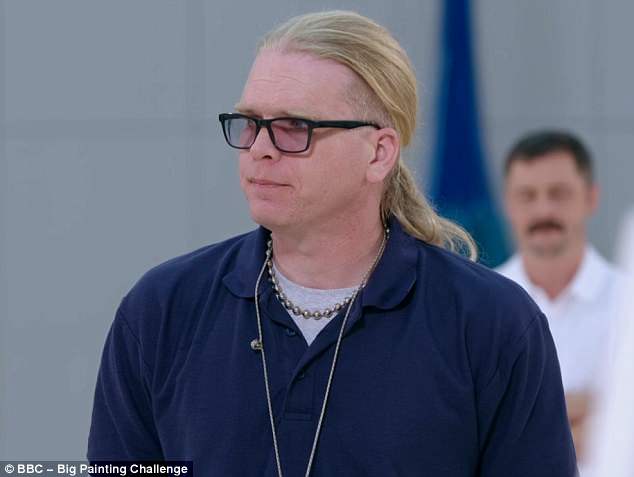 Chris, who has a visual impairment, looked close to tears as he presented his work in front of the shows judges 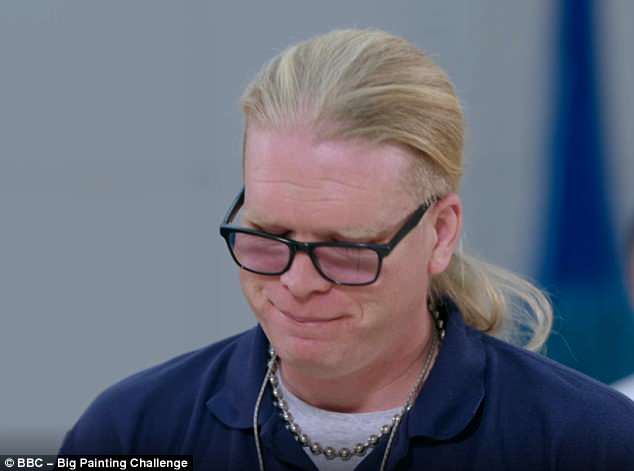 His interpretation of the gymnasts in motion had ‘failed completely’, said Daphne Todd, is fulfilling the task 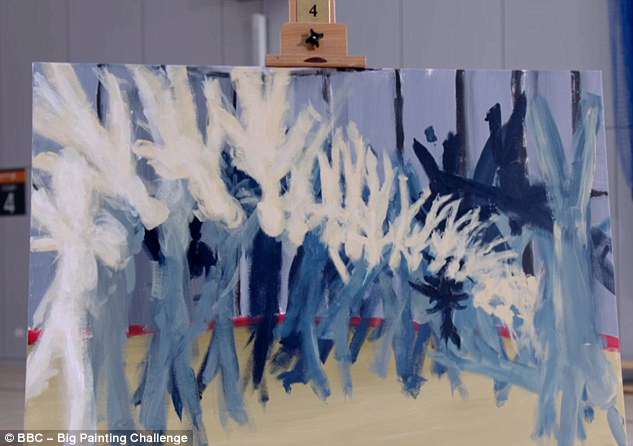 Not mincing their words: The work didn’t capture the ‘movement’ of the gymnasts, the judges said 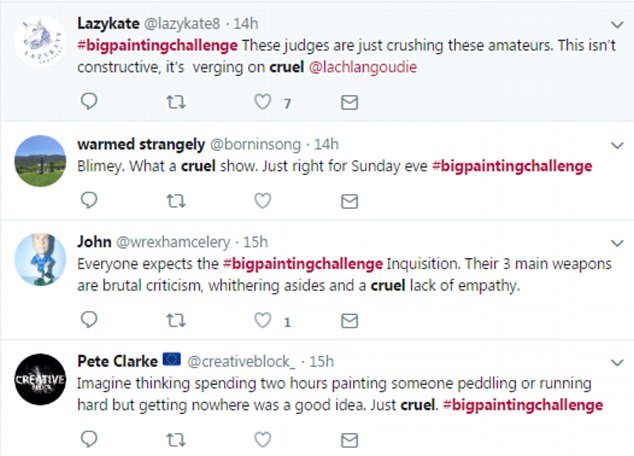 The show, filmed at Glasgow’s Kelvin Hall, saw the remaining six artists tackle two tasks on movement. First up was capturing an endurance runner and a world record-breaking cyclist, followed by a group of gymnasts.

When it came to Todd and Goudie offering their thoughts on the painting, hardly any of the artists fared well.

Meanwhile, Goudie branded the work of Anil, who’d painted a woman doing a handstand as the ‘eight-legged woman’ with ‘mighty, mighty thighs’.

A disheartened Oliver, who had been ‘proud as punch’ of his gymnast in motion landscape was told it was ‘a bit trite’ by Todd, and lacking in ‘soul’ by Goudie.

Susan, from Northern Ireland, said the judging was ‘unbelievably brutal’.

At home, viewers were incandescent at the treatment.

‘Take some inexperienced painters, set them a task that would be too challenging for most professional artists and even when they do against the odds produce a good painting tell them it’s soulless.’ 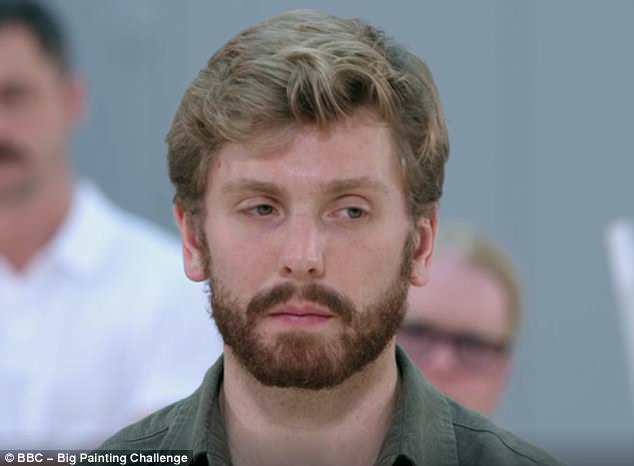 Crushed: Oliver looked devastated to be told that his interpretation of a gymnast in motion was ‘trite’ and lacking ‘soul’ 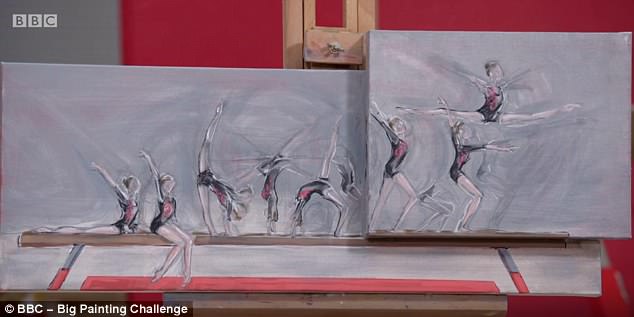 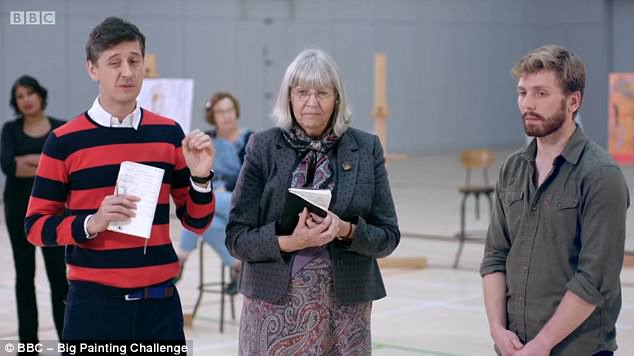 With his shoulders visibly drooping, it was clear it was hard for Oliver to digest Goudie’s comments 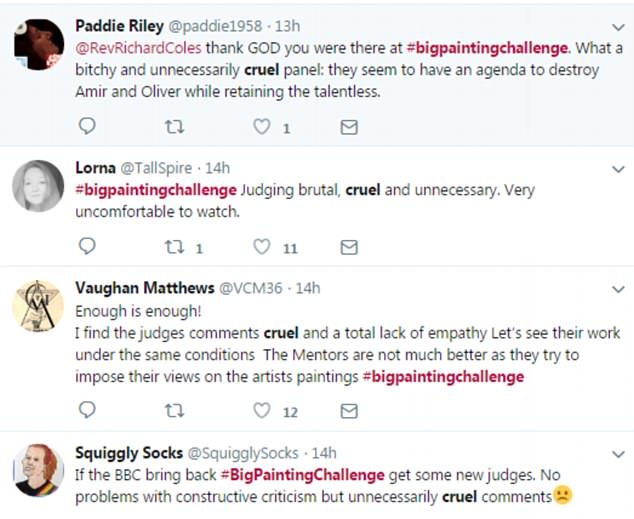 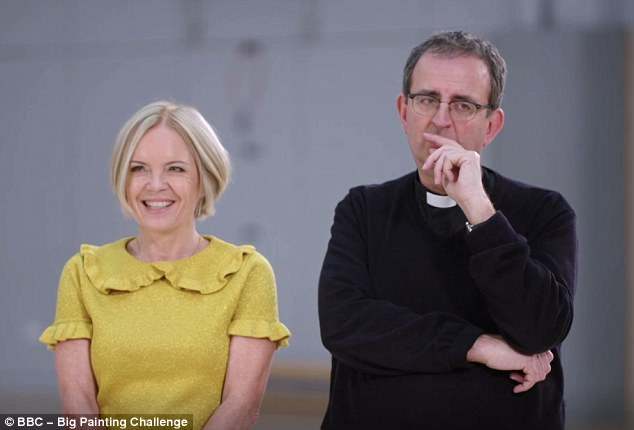 Presenters Mariella Frostrup and Rev. Richard Coles looked awkward at times during the judges’ analysis of the works 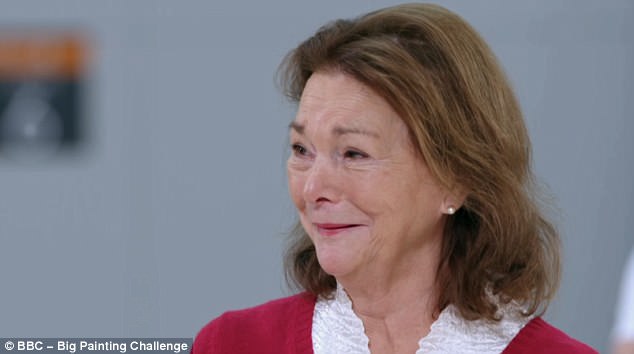 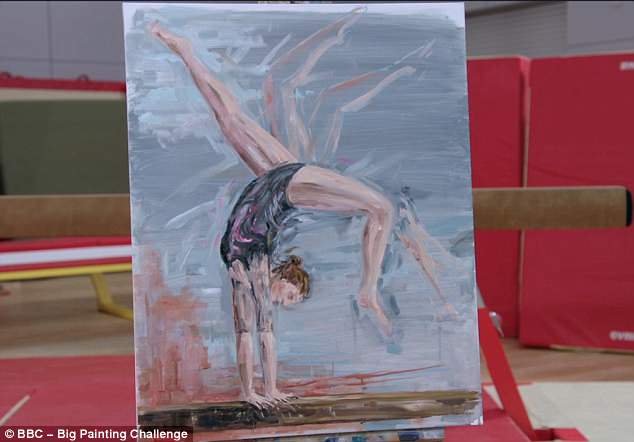 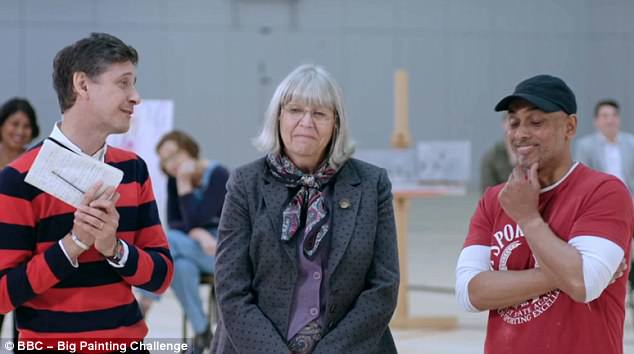 Get some new judges! Many viewers branded the criticism as not constructive but merely ‘bitchy and cruel’ (Pictured: Judges Goudie and Todd, with contestant Anil)

@RussellGoodban added: ‘The big challenge on #thebigpaintingchallenge is to not smash the canvas over the so-called judges’ heads.’

@jcscottie added: ‘#thebigpaintingchallenge to say someone’s artwork is soulless is one of the nastiest things you could ever say! Not surprised the guy’s upset.’

@flutterbyfavs added: ‘No one should enter #bigpaintingchallenge people’s self-confidence is being destroyed.Making art is about the joyful process not the end product -shame on this program and the judges. Art is about enjoyment, selfexpression, emotional release & wellbeing. Art is not a competition.’

@djones1509 penned: ‘Why are the judges so cruel? It doesn’t make great viewing! Only one more episode to go then it’s no longer on our TV on a Sunday evening, for a while anyhow!’