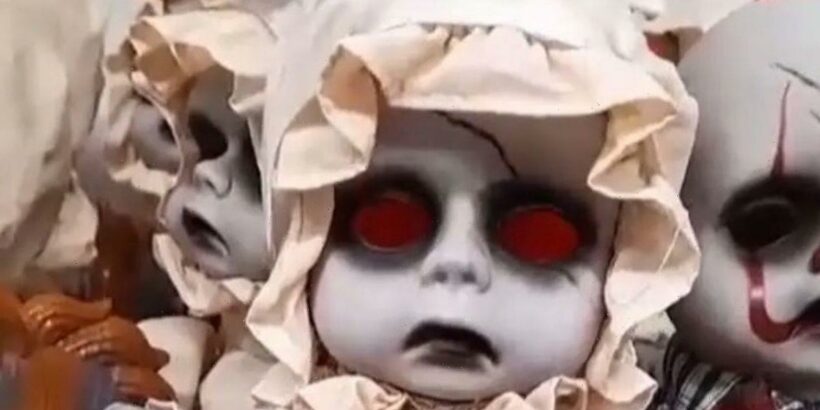 If you want to make things creepy in your house this Halloween, you may want to head to Asda.

That's because the supermarket has some super creepy Halloween dolls on sale.

The store's shoppers have been left scared stiff after spotting the spooky rocking dolls on shelves as part of its Halloween range.

Shoppers in the market for some creepy dolls to add to their home can choose from either a little girl, complete with bonnet and striped socks, or a clown doll that gives Pennywise a run for his money.

Not only do the dolls look horrific, they also rock and back forth while a creepy nursery rhymes plays – if that isn't creepy, we don't know what it!

A description for the £15 dolls reads: "Terrify your guest this Halloween with this animated clown on a rocking horse. Doll rocks on horse and sings 'ring a ring a rosey' while eyes light up red."

Videos of the dolls has been shared online where shoppers have been left feeling disturbed by the dolls.

Commenting on the Extreme Couponing and Bargains Facebook page, one person wrote: "I feel ill."

Another added: "It's when it's activated on its own in the middle of the night at the top of the stairs that's fun."

While a third asked: "Strangely want this for my house. Do you think it'll scare the kids?"

Meanwhile another personal slammed the dolls on Twitter, writing: "Human ability to compartmentalise, and make light of terrible things is amazing.

"Child mortality for example, awful thing, to be handled with utmost tact, but selling undead animatronic babies for £15 down Asda is absolutely fine."

Despite this, other people were loving it, as one person shared a clip of the dolls, writing: "Asda has upped its Halloween game this year!!"

Someone replied to the post: "Holy f**k! I'll take four!"

Another Halloween item which may not scare you quite as much is this unusual Freddy Krueger mask which got more laughs that screams this week.