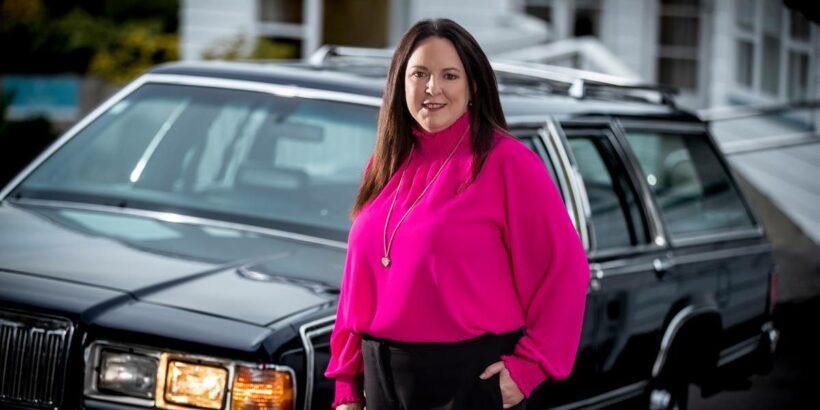 No, she’s never seen a ghost but she does talk to dead people. Joanna Wane meets Rachel Benns, the first female president of the Funeral Directors Association.

Rachel Benns’ sister, Paula, was late for her own funeral. As everyone sat waiting for the service to start, wondering about the empty space at the front of the chapel, the opening guitar chords of the Troggs’ Wild Thing rang out and she was carried in — her car’s “YLDTHG” number plates attached to each end of the casket.

“She broke the mould,” says Benns. “It stressed me out because funeral directors are never late and the casket is always there first, but she wanted to make an entrance. And that was her favourite karaoke song.”

A certified funeral director herself, she’d helped Paula plan her final send-off right down to the last detail, from the guest list and the music to the yellow sunflowers printed on her casket. On the day, a friend had to take her aside and tell her it was time to step back and allow herself to be one of the mourners.

It’s been 12 years since her sister died, at the age of 39, after developing secondary melanoma. The grief still comes in waves. Paula’s daughter, now a young teenager, stayed for a sleepover the other night and Benns’ elder daughter gave her a makeup lesson. “When she turned round and smiled at me, she looked so like my sister. It’s been a long time, but I still did that big gulp,” she says.

“People get out Kubler-Ross [the five stages of grief outlined in the Kubler-Ross model] and go, ‘I had anger last week, but I haven’t had that yet and now I should be having something else.’ But everyone is so different. That’s not how we care, as humans. You don’t get over grief. It doesn’t stop. You just learn to live with it.”

In lockdown, when funerals were limited to a maximum of 10, some families were forced to draw names out of a hat to decide who could come to the service. Others held off making arrangements for weeks at a time in the hope limitations would be eased and in the fraught scramble for MIQ places as people desperately tried to get home in time to say their farewells.

It was lobbying by the Funeral Directors Association that helped convince the Government’s Covid-19 taskforce that funerals could be held safely with up to 100 people under the red traffic light system, and that the sector should be given critical-worker status with priority access to rapid antigen tests.

Benns has been directly involved with those negotiations, first as vice-president and then stepping up to become the first female president in the association’s 85-year history. She says the enforced separations caused by Covid have shown how important human connections are when we’re grieving, although innovative use of technology has helped.

Virtual viewings have been held via FaceTime and Benns has arranged for drones to follow the hearse so absent family can watch the burial. Live streaming of services is now commonplace, with those who can’t be there on the day encouraged to send “Hugs from Home” — photos or personal messages that are printed out or written on a helium balloon and attached to the chairs.

“It’s told us again how precious it is to come together and say goodbye,” she says. “Part of being able to get through is having people there to support you, isn’t it? When I think of the Queen [at Prince Philip’s memorial service], sitting on her own.

“We’ve farewelled our loved ones since the turn of time and when that’s taken away, we realise what we’ve missed. Ask Ben Smart and Olivia Hope’s parents what they would give to have their children back, even now, to be able to say goodbye properly.”

Tact and diplomacy are among the attributes that led to Benns’ recent appointment, so her words are chosen carefully, but she’s also on the offensive after a recent news story stirred up a flurry of consternation among the association’s members.

The week before we met, there was a story in Spy about entrepreneur Sharon Hunter’s latest co-venture Great Goodbyes, an online funeral planner designed to “fundamentally shift the way we say goodbye to those we love”.

Hunter, who was just 22 when she co-founded PC Direct in the late 80s, says one of the regrets she had about her own mother’s funeral was all the restrictions imposed, including having to use a professional casket spray rather than cut flowers from the garden.

Benns finds that surprising. A move away from such a prescriptive approach is the biggest change she’s seen since door-knocking her way to a part-time job as a trainee funeral director at the age of 20. Religious ceremonies are far less common, with about 70 per cent of people now cremated rather than buried. Gone are the days when children (and laughter) were discouraged and it wasn’t considered appropriate for men to openly cry.

Over the past three decades, Benns has held services in aviation hangars, in paddocks and on beaches; organised a candlelit Wiccan funeral; done a burial at sea by helicopter off Muriwai Beach; rung round hothouses to source lilies out of season; and accommodated a request to include four pet llamas on the guest list at one of her Auckland funeral homes (although they did have to stay in the carpark).

“Twenty or 30 years ago, the family would arrive and be told the funeral is on Tuesday at 11am, you’ll have a dark wood casket and Bob the minister will come and do it. It was very impersonal. Now everything is more and more about the person, not the farewell house,” says Benns, who describes funeral directors as a beacon guiding families through the fog of grief.

“I don’t believe people will go onto the internet and order a whole funeral without some form of a personal interaction, because they need that comfort and support. I don’t think a computer will ever take that away.”

The fact that it’s taken almost a century to put a woman in charge tells you just how much of an exclusive boys’ club the industry has been. Traditionally, funeral homes were passed down from father to son and doubled as the family home; wives were the typically invisible partners who helped run affairs behind the scenes.

Benns’ father was horrified at first when he found out she wanted to become a funeral director. It wasn’t a path you chose, he told her, it was something you were born into.

It’s hard to imagine now just how radical it was when Benns and her business partner, Raewyn Proctor, opened their first funeral home in 2000, in Manurewa. Three years later, Resthaven Funerals expanded to a second branch in Howick, a suburb that’s been home to Benns for most of her life. Both women were mothers of young children at the time, another black mark against them as far as the old guard was concerned.

“I can remember the big boys laughing and saying they’d give us six months,” says Proctor. “What they didn’t realise is that people liked us. They liked that we were young and they liked what we stood for — we’re community-based and we’re real. It didn’t matter whether they were at a funeral or bumped into us down the road at the shops.”

Proctor still runs the two Resthaven homes, which were bought by InvoCare in 2013. Benns was made regional manager, responsible for the company’s 11 sites across Auckland.

On the day Canvas caught up with her, she was off to Henderson to supervise a new furniture fit-out, adding interior designer to a job description that already includes peace negotiator and occasional bouncer. Tense confrontations she’s dealt with in the past include facing down gang members wanting to remove a body and making a news photographer who’d gatecrashed a closed funeral hand over his film.

The first thing people ask, when they find out what she does for a living, is whether it’s scary being in a funeral home at night and if she’s ever seen a ghost. It’s not, and she hasn’t. She does talk to the bodies, though, as she sets their hair and fits their clothes or applies some colour to their cheeks. When she’s driving a casket in the back of the hearse, she’ll chat away to them or sing. “People ask if I’m scared of being haunted. But if I’ve been respectful and cared for them, why would they want to come after me?”

Benns was 10 when a young aunt she was very close to died suddenly. She remembers rain at the funeral and seeing her father cry for the first time. That was the day she decided she wanted to become a funeral director, although she instinctively knew that was strange and a decade went by before she told anyone. She’s never been religious but still, it felt like a calling.

After leaving school, she worked briefly as a dental nurse and then in a childcare centre before getting a job at a funeral home in Manukau, where she spent most of her time washing cars and trimming caskets. “I became a dab hand with a hammer and drill,” she says.

Although it’s not a side of the business she decided to pursue, Benns learnt the process of embalming bodies to preserve them for viewing and how to make them whole again if an autopsy had been required. She has a strong stomach for that kind of thing and finds the science of it fascinating.

Experience has taught her how to navigate family tensions through the strategic use of seating plans, and protect herself against absorbing people’s grief so deeply it becomes untenable. She handled several of the funerals after six students and a teacher from Elim Christian College died in the 2008 canyoning tragedy, and she can still see the face of the first child she cared for, a “little tot” who drowned.

“If you try to work out the why, you’ll tie yourself in knots the whole time,” she says. “I just know in myself that everyone has a time. You can wrap people in cotton wool and stop kids jumping off the jungle gym or tell them they can’t drive cars, but you could wake up tomorrow after being in the sun and develop melanoma.”

In the old days, families who could afford it commissioned keepsakes of the loved ones they’d lost, enclosing a lock of plaited hair into a locket or a brooch. Benns has built up a collection of “mourning jewellery” she’s pickedup on Trade Me or eBay, the oldest dating back to the mid-1800s.

A beautiful painting of a sunflower on her living-room wall has a pinch of her sister’s ashes mixed into the centre of the flower, a contemporary memento that will be a gift to her niece when she turns 21 or perhaps on her wedding day.

Benns drives a more conservative car when she’s on duty, but there’s a racy black Chevrolet Camaro convertible parked in her garage that she’s had fitted with Paula’s old YLDTHG number plates. “That’s one thing my sister taught me — you have to live life for today, because tomorrow may look very different when it comes.”