Australians want a strong response to China over growing tensions on security and trade, with 62 per cent recently surveyed saying the nation should “stick to its values” despite the risk of retaliation from a major trading partner.

A majority of Australians believe the country should call out Beijing over its approach to Hong Kong and Taiwan, retaliate against Chinese trade sanctions and speak out on human rights abuses against the Uighur people. 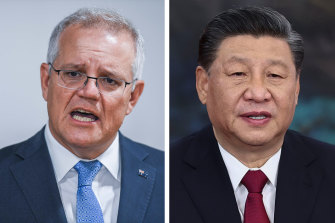 Prime Minister Scott Morrison has said several times he wants to resume talks with Chinese President Xi Jinping but has ruled out giving ground on a list of 14 grievances lodged by Chinese diplomats in November.Credit:Joe Armao/AP

But only 45 per cent support a stance that warns of armed conflict with China, with a new survey revealing strong objections on this point amid a vigorous political debate about the federal government’s rhetoric.

With diplomatic relations between Canberra and Beijing at their lowest point in decades, 54 per cent of respondents agree with a federal decision to cancel the Victorian government’s agreement with China on its Belt and Road infrastructure initiative, while 8 per cent oppose it and 38 per cent are undecided.

Prime Minister Scott Morrison has said several times he wants to resume talks with Chinese President Xi Jinping but has ruled out giving ground on a list of 14 grievances lodged by Chinese diplomats in November. The list includes Mr Morrison’s call for an independent investigation into the origins of COVID-19, the government ban on Chinese 5G supplier Huawei and Australia’s “crusade” on Chinese policy on Taiwan and Hong Kong.

The exclusive survey, conducted for The Sydney Morning Herald and The Age by research company Resolve Strategic, shows 69 per cent of respondents believe Australia should speak out against human rights abuses involving Muslim Uighurs in Xinjiang, one of the Chinese grievances.

Six weeks after the government launched a review into Chinese ownership of the Port of Darwin, the survey found 60 per cent of Australians back the move, with only 12 per cent against and 28 per cent undecided.

The survey also found 66 per cent of people support the government’s call for an investigation into the source of COVID-19, a position that provoked strong Chinese criticism and was followed by restrictions on Australian exports including wine and barley.

The Resolve Political Monitor was conducted from June 8 to 12 and asked 1600 voters about their views in online questions, with a margin of error of 2.5 per cent.

The Chinese government has also suppressed pro-democracy activists in Hong Kong with dozens of protest leaders in jail despite the release of campaigner Agnes Chow last Saturday.

The survey found 58 per cent of respondents agreed with criticising China over its approach to Hong Kong and Taiwan, with 10 per cent opposed and 32 per cent undecided.

The overall findings are in line with the bipartisan position taken by Coalition and Labor leaders in rejecting Chinese demands for action on the grievance list.

Labor foreign affairs spokeswoman Penny Wong last month warned about the Chinese government’s aggression in the region, its militarisation in the South China Sea and its use of economic coercion against Australia and others. But she criticised the government for rhetoric about the “drums of war” and the growing risk of a conflict with China.

A separate survey by the University of Technology Sydney found this week that 67 per cent of Australians agreed with the proposition that “China is a security threat to Australia” and 63 per cent wanted the government to take a harder line in dealing with China.

The UTS survey, based on answers from 2000 respondents, found 72 per cent support for the government’s call for an inquiry into the source of COVID-19.

The Resolve Political Monitor asked further questions of Australians about what the country should do to ease tensions with China, but the strongest response was from 56 per cent who were against compromise.

The survey also told respondents some people believed Australia should not antagonise China because it is a major trading partner with a large military, while others thought it should stick to its values and speak up. Asked which view most closely aligned with their own, 62 per cent chose “stick to its values and speak up” while 23 per cent said “think twice before antagonising” and another 23 per cent were undecided.