Just one week after she deleted photos of her daughter off of Instagram, Kylie Jenner has shared a video of baby Stormi. The lip kit mogul previously revealed in a comment that she wasn’t sharing photos of the baby, which is totally understandable. But in a new video, Stormi is back on Kylie’s Instagram, though her face isn’t visible in the clip.

The short video, posted on Kylie’s Instagram Story, gives a brief glimpse into her life as a new mom. In the clip, Kylie is holding Stormi, whose face is pointed away from the camera. As Kylie bounces the baby, Stormi maintains a death grip on a toy, which the person filming the video zooms in on, commenting, "That’s dedication." Kylie is smiling in the clip, and it looks like she couldn’t be happier to be a parent.

The new video featuring Stormi comes as a surprise to fans, since it seemed like Kylie wouldn’t be sharing more images of her daughter after last week’s mass deletion. Based on the new clip, though, it looks like the makeup mogul isn’t entirely against showing her daughter online, as long as her face isn’t in the shots. (In the photo Kylie shared that included the comment about not showing Stormi’s face, the baby is still visible in the side of the image, though most of her face has been cropped out.) 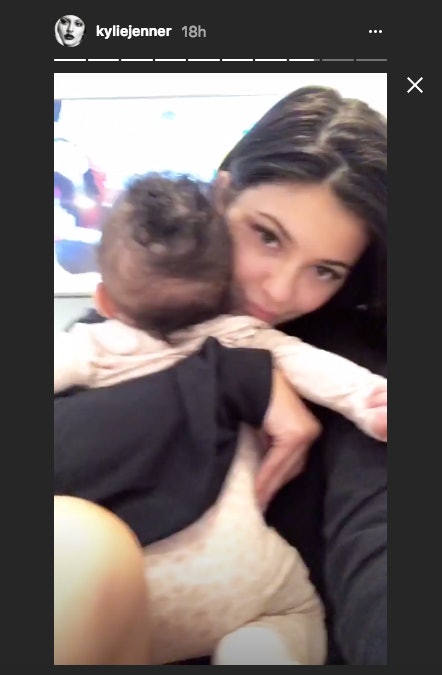 Before she deleted the images, Kylie was open about sharing photos of her daughter online. When she, Travis Scott, and Stormi went on vacation in early May, she posted plenty of photos of the family, including Stormi, relaxing in Turks and Caicos. Since then, though, it looks like Kylie’s had a change of heart about what how much of her daughter’s life she want to share online.

Still, the new video shows that Stormi hasn’t disappeared from social media entirely, even if fans probably won’t be seeing her as often as they did in the past. In addition to the new photo Kylie shared, Scott also posted a photo that featured Stormi on his Instagram story a few days ago. The snapshot showed the baby’s legs and feet, and the rapper captioned the photo "Gang."

While Kylie was notoriously secretive about her pregnancy, not even revealing that she was expecting until Stormi’s birth in February, she’s been more forthcoming about parenthood since then. In an interview with her sister Kim Kardashian for the Evening Standard, published in May, Kylie shared what motherhood has been like for her. She told Kim of parenthood,

Kylie also talked about her strong attachment to her daughter during the Evening Standard interview — it’s clear the two of them already share an incredibly close bond. She told Kim of Stormi,

Of course, it’s completely up to Kylie how much she wants to share, or not share, about her daughter online. And fans should be respectful of whatever she decides — after all, Stormi is just a baby, and Kylie is a mega-famous star. If she and Scott want to shield their daughter from the spotlight, at least during her early months, that’s totally within their right. But based on the latest photo, it looks like Kylie’s social media handles won’t be totally Stormi-free, and that will probably make her fans happy, too.