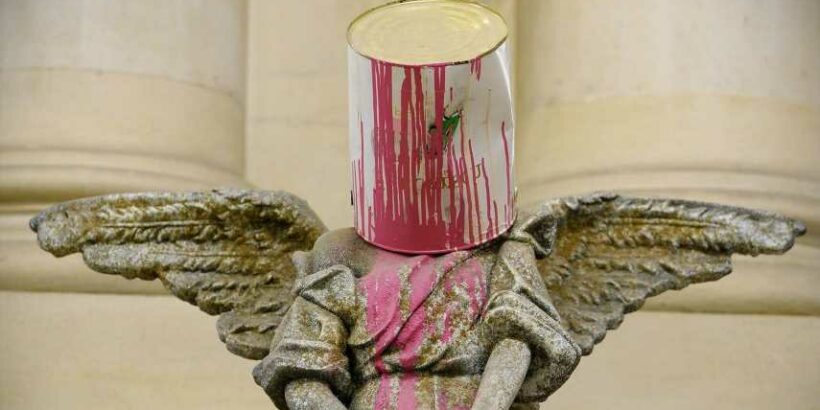 Banksy began his career as a street graffiti artist in 1990 and stunned fans with his incredible ability to showcase his creative talents in the most obscure and unsuspecting way. Graffiti art soon took over the streets and people were as mesmerized by the incredible art that was being showcased, as they were about the fact that the artist was shrouded in mystery, with a concealed identity and no level of predictability.

The artist was unknown. The image and reflection of his face was unknown. Yet his talent was making international headlines. It wasn’t long before the mystery artist known as Banksy was making history for his high-priced, and highly sought-after art pieces. But now, the Daily Mail reports that the very same element of mystery that helped him gain notoriety is now being touted as the reason that he no longer has rights to his own artwork.

Banksy has fans across the globe, and the majority of them have been glued to his career and highly supportive of his art as a direct result of his image. Ironically, his very image and identity have been strictly concealed for the entire duration of his career in the world of art, and that’s precisely the attraction.

The idea that each piece of creatively designed art is one-of-a-kind and was created by this mysterious, yet famous artist, is the basis of Banksy’s popularity in the first place, yet now, his very purposeful anonymity is the very reason he is losing the rights to his very own art work.

MSN reports that; “Banksy can no longer claim legal rights to his artwork, experts say after he was stripped of two more trademarks for some of his most famous graffiti.” They went on to state; “the two latest rulings against the anonymous multi-millionaire street artists means he has now lost rights to four of his works.”

The issue at hand, as declared by The European Union Intellectual Property Office, is the fact that Banksy’s anonymity means he can’t personally secure the copyright for his artwork. He is claiming that he owns trademark rights, but he refuses to personally claim those rights, catching him in the shadows of the trademark laws.

He is being accused of acting in bad faith, and has now officially been stripped of his trademark rights to Radar Rat and Girl With Umbrella.

Banksy has previously been under fire for saying; “‘copyright is for losers” and is now seeing the direct results of just how truly critical trademark licensing really is.