Wurstbar in Jersey City, New Jersey has a small staff but usually operates like a well-oiled machine. When an employee at the restaurant tested positive for COVID-19, the whole operation was thrown off course. Fortunately, a kind neighbor stepped up to keep the restaurant running during a busy weekend.

Aaron Khan, who owns and operates Wurstbar, said when a staff member notified him they had tested positive for COVID-19, he made a difficult decision. “We kind of all decided that it was just the smart move, the safest move would be to close, get the proper people into quarantine and then get the entire company tested,” Kahn told CBS News.

The closure was temporary, but it couldn’t have come at a worse time – right before an unseasonably warm November weekend. “We closed on a Thursday night and we were about to embark on this record-high-temperature week,” Kahn said. “And I knew that that was going to be this week, that we were going to bring in a lot of money, like something that’ll help us through the late fall and the winter.”

The next day, Kahn spoke to a neighboring business owner, Andre Fersa, who owns and operates Virile Barber & Shop right down the block. “So me and Andre, we kind of have a barter system, he gets free food and drink, I get a free haircut,” Kahn said.

“And that Friday, I basically told him, ‘I can’t come in today.’ He’s like, ‘Everything all right?'” Kahn told Fersa what happened and the barbershop owner agreed that it was best for Wurstbar to close down for a few weeks. 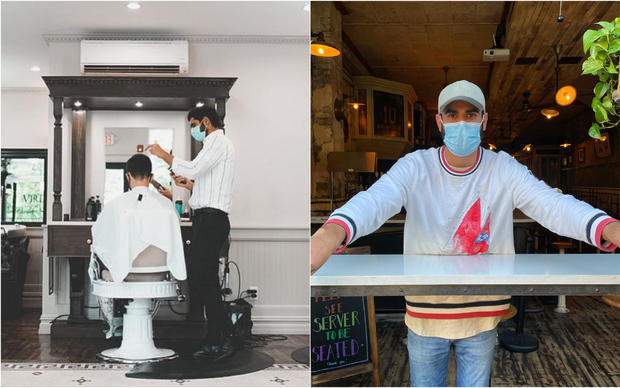 Fersa said it initially started out as a joke, but when Kahn called him that Saturday, he was excited to try his hand at running a restaurant.

Fersa and his friend, Joe, reported for duty on November 6 and got a 30-minute rundown on how to serve customers. “I don’t have any experience waiting tables and Joe doesn’t have any experience tending bar,” Fersa said. “I just thought that it would be a little bit outside our realm… It worked out pretty good, I think.”

Kahn was at first devastated he had to temporarily close his businesses, especially after a difficult year of uncertainty caused by the pandemic. But when Fersa showed up, his spirits lifted.

“It helped revive me,” Khan said. “It just, it motivated me and made me feel great. And even if we just gave away beers to the neighborhood for free that day, I still would feel great about the decision we made.”

Kahn said he created an abbreviated menu for Fersa to make it easier – no cocktails, just beer. The weather was beautiful and he believes Fersa served up to 80 customers that day.

“It was awesome,” Kahn said. “And it was seeing everybody’s reactions and seeing all the neighbors support us and seeing the whole city support us and everything that followed afterwards… It really spoke to me, and I think it spoke to a lot of people.”

As a small business owner, Fersa understood the difficulty Kahn was facing. “I feel like navigating business in this time is obviously way harder – and not like physically, but like emotionally as well,” Fersa said. “You pour everything, your body and your soul, into your business, and then for something like this pandemic to kind of claw back and take it all away from you, it’s like hard to reconcile with.”

“After helping out Aaron, it kind of like rejuvenated me and gave me a little more hope going into like what’s supposed to be a pretty brutal second wave and a winter that I think a lot of other businesses are going to end up, you know, closing their doors for good, unfortunately,” he said.

Fersa quickly went from barber to bartender, and his day of work impressed Kahn. “I’ll pick up a few shifts here and there,” Fersa joked.

“Yeah, we’re going to add them to the schedule,” Kahn laughed.

Their story is not just one about two business owners, but two friends doing the right and neighborly thing. “I think we need to be more like this. Like figure out ways of helping each other out, thinking outside the box and not letting like our neighbor go down,” Kahn said. “Andre came to our rescue. And I want to be able to do that for somebody else if I can.”

Kahn said he wishes he could pay Fersa back in the same way – but he doesn’t know how to cut hair.