When Vietnam veterans first saw Oliver Stone's Platoon in 1986, many of them left the cinema weeping. It was cathartic, they told their family and friends, to finally have a realistic depiction  of war onscreen.

Platoon , the first movie about the Vietnam war that was written by a former soldier, went on to sweep the Oscars, winning best picture, best director and a slew of others. I can only hope that Tully , written by mother of three Diablo Cody, achieves the same, because it is the Platoon mothers have been waiting for. 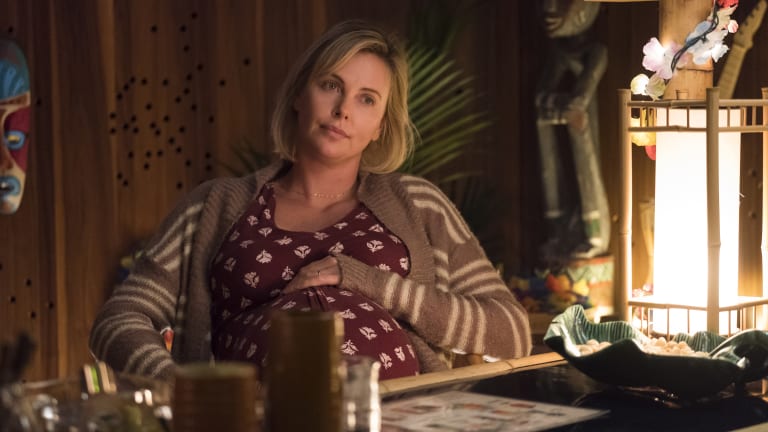 Charlize Theron in a scene from Tully.

It should go without saying that raising a family is not the same as going to war; the reasons are multiple and obvious.

And yet. There are similarities to be found in how society views both the nurturing of life and the destruction of it. Both acts are tied to the most extreme stereotypical myths about each gender: that women are naturally self-sacrificing and maternal, that men are naturally stoic and brave. But in both cases, there is a thudding, almost unrelenting belief, that wounds, both physical and psychological, can heal without a trace, and that the brain and the body should be able to bounce back from trauma.

Tully 's message, just like the message of Platoon, is both profound and simple: behind the myth of motherhood (or soldierhood), there is a person, grieving for who they once were.

We've come a long way from Leave it to Beaver; raising kids is now shown on screen in a much more realistic way. But many depictions of motherhood in pop culture right now focus on the harried nature of it; the frustration, the guilt, the problem with "having it all". Parenting is now allowed to be chaotic, as long as it remains glamorous and upbeat.

Big Little Lies dealt with the thin thread of competition that slithers through so much of modern child-rearing, and the pull of conformity. Bad Moms was a farcical romp; an attempt at raunchy rebellion. Gilmore Girls, a frothy cappuccino fantasy. Then there's Roseanne which, though it may be unvarnished, never gives us any sort of vulnerability – Roseanne is pleased to make herself contrary and gross, as long as she's never viewed as weak (perhaps this is what she likes about Trump?), and SMILF feels like Roseanne's little sister.

But Tully is an examination of the internal. The shell-shock of pregnancy and birth and post-birth, that, yes, includes sleep deprivation and never getting a moment to yourself, and all the tiny, mildly horrific things that happen to a woman's body. But it does not stop there.

One of the great advantages of using Charlize Theron (apart from the fact that her face will put bums on seats), is that we can clearly imagine her not being a mother, because we knew her before she had kids, and we see her on the red carpet without them.

So when we see her character longing and grieving for the life she once lived before she "settled down" to give her kids a safe life, we understand it. We can see that this is not what her body normally is, nor her hair or face. And then we can see, because Theron is an incredible actress, that this is not the sassy celebrity we think we know.

This woman is weary; but her weariness is not normal for us. If only mothers were viewed the same way. Being tired all the time, losing your memory, losing your sense of self, having neither the desire nor the means to make dinner, let alone indulge in "self care" – this has all been normalised by our culture as part of being a mum. The only mother who escapes this curse is the one with enough money to get help – as she should. And Tully deals with this aspect too, that help and free time are not a feminist issues – they are economic ones.

There are all sorts of reasons why women are having children later in life, (including, of course, the fact that men don't generally want to have them young, either). But the final result ends up being that by the time women have babies, they've lived a full life, they've dipped more than their toe into the water of courtship – they've likely lived with a few people. They've partied, loved and been loved and enjoyed being seen.

And then here comes motherhood, followed quickly by menopause, and the life that once was will never be lived again. Meanwhile, everybody on the outside is telling mothers how "amazing" they are, without ever really seeing them as people.

This, as feminist and author Jessica Valenti once explained, is a little bit like when people walk up to soldiers and tell them "Thank you for your service". In other words, we appreciate the sacrifice; we really do. But we also have absolutely no desire to be on the front line.

It seems like as a society, we prefer to idolise motherhood as a monument of unconditional love and self-sacrifice; we can let women fall mentally ill, and feel traumatised by birth and the emotional load of child-rearing; we can praise them and thank them for their sacrifice – just so long as we don't have to help, or change anything, so that the woman we claim as our first love, can keep on walking wounded.