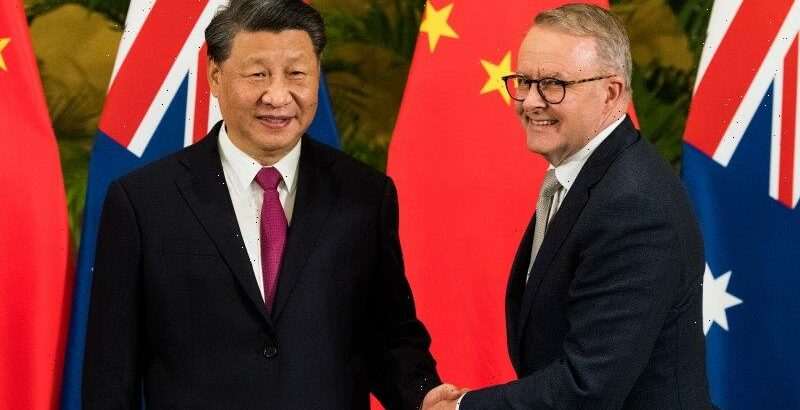 It could hardly be described as a charm offensive, but after three years during which China took virtually every opportunity to reproach Australia, President Xi Jinping’s meeting with Prime Minister Anthony Albanese in Bali on Tuesday pointed clearly to a warming of relations. For 32 minutes the two met on the sidelines of the G20 summit in Bali. Both acknowledged past difficulties but also, crucially, underlined the constructive nature of the discussions.

Nothing concrete has so far changed. As Albanese made clear in his post-meeting press conference, trade sanctions have not immediately been lifted or disagreements over human rights resolved. If these things are to happen, it will be achieved by diplomats and public servants working away in back rooms. But this meeting was a public exercise in signalling that Australia’s time in China’s diplomatic deep freeze was over. 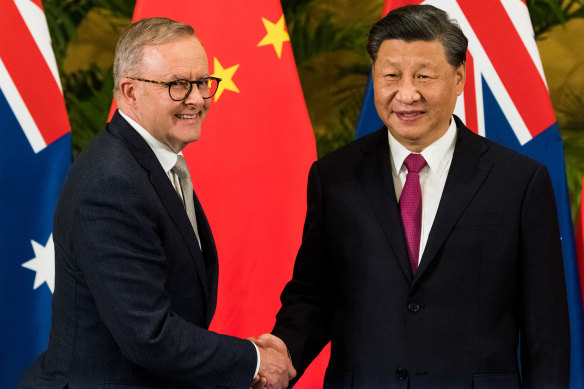 Anthony Albanese and Xi Jinping greet each other in Bali on Tuesday night.Credit:James Brickwood

Australia is not alone. During Xi’s first appearance at a major global gathering outside of China since the pandemic took hold, he met several Western leaders, most notably US President Joe Biden, in a bid to repair some of the damage done by China’s more aggressive so-called wolf-warrior diplomacy and the tit-for-tat trade responses that followed.

There is good reason for Xi now to rethink this strategy. China’s domestic economy is flatlining, its property market is in a financial spiral and its ongoing preparedness to impose harsh lockdowns in the attempt to stay free of COVID-19 is causing widespread disruption. As The Age’s North Asia correspondent Eryk Bagshaw explained, for China, the economic sanctions are no longer fit for purpose because they are causing self-harm by limiting its access to coal at a time of soaring power prices and energy blackouts without creating any significant policy shift in Australia. Most Australian producers, outside highly specialised lobster farmers and some wineries, have been largely unaffected by the trade restrictions.

There is also no doubt that the bipartisan support in Canberra for Australia’s tough stance on China led by the Morrison and now Albanese governments has helped make it clear to Beijing that we would not be bullied into accepting numerous conditions for dropping the trade sanctions. A shift in rhetoric from the Albanese government has also helped turn down the temperature on the relationship.

While the former defence minister and now opposition leader Peter Dutton was vocal in telegraphing his concerns about China’s growing geopolitical aggressiveness, even warning Australians in April this year to “prepare for war”, Labor has taken a more muted stance. So far at least, it has managed to achieve a warmer atmosphere without backing away from any policy issues, including on the AUKUS partnership and the foreign interference regime.

As former prime minister Kevin Rudd pointed out this week, if you create “a strategic pause pattern of just shutting up” the Chinese system has demonstrated time and time again through past disputes with Japan and South Korea “that they are capable of turning on a dime”.

There is no suggestion here that all our problems with China are over, however. At the recent Chinese Communist Party congress, Xi was adamant that while he will strive for a peaceful reunification with Taiwan, he would not rule out the use of force. China’s economy may have stalled, but Xi was showing no sign of wanting to take a backward step in expanding its global influence.

That said, there is good reason to be cautiously optimistic that a broader thawing of relations between the two nations is now possible – something The Age has called for repeatedly. Australia will never see eye-to-eye with the communist state and should never back down on its interests, but with smart diplomacy there is some hope it can forge a more balanced and respectful relationship.

Michael Bachelard sends a newsletter to subscribers each week. Sign up to receive his Note from the Editor.