In a defiant blast against body shamers, David Hasselhoff’s daughter Hayley says… Being a plus-size model saved my self-esteem

While her father David was running up and down the beach in red trunks on Baywatch saving lives, the teenage Hayley Hasselhoff was at home in Los Angeles, cutting, pinning and re-hemming her clothes — dreaming up ways to make them work for her larger than sample-size figure.

‘If an outfit didn’t fit me, I’d make it fit me,’ says Hayley, now 27, with determination. It’s a sentiment that resonates. She’s the same size as the average woman in the UK — 16 — and we bond over the singularly demoralising pursuit of flattering jeans. But with sunny Californian optimism, Hayley says the shape of fashion is changing. ‘We have made amazing leaps and bounds. “Curve” collections in the UK High Street are so advanced compared to America.’

She should know — she’s been modelling plus-size clothes since she was 14 and has become one of the sector’s most outspoken advocates. We meet as her new campaign with British fashion website Simply Be is about to launch, for which she models a range that comes in sizes 12 to 32. 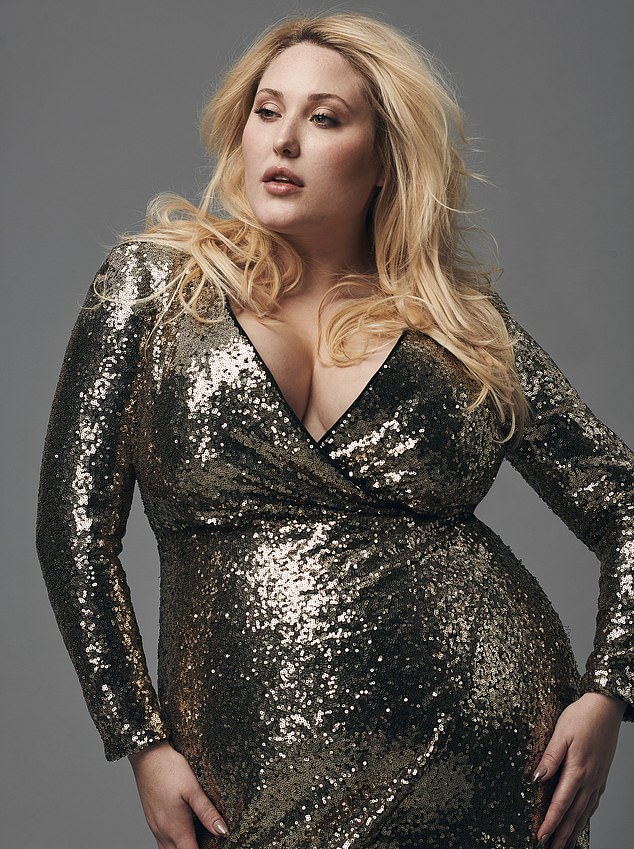 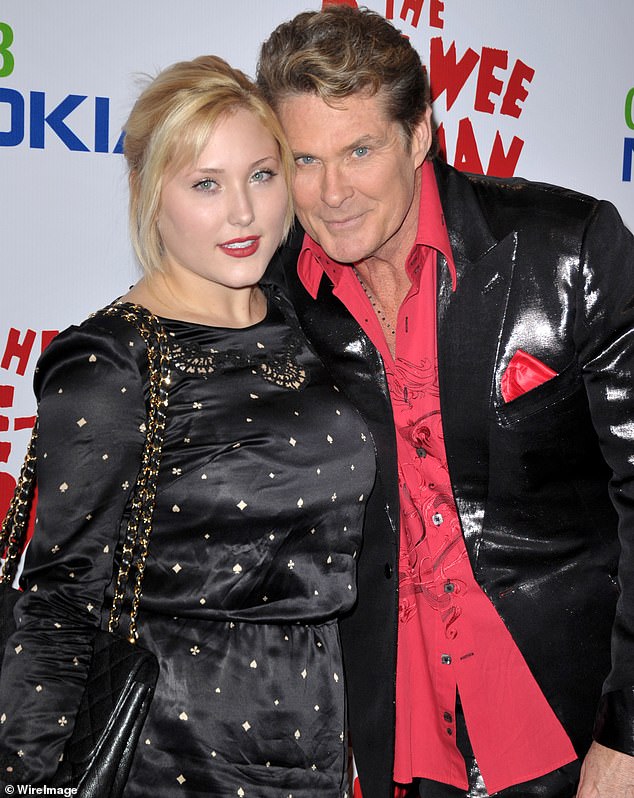 While her father was running up and down a beach in red swimming trunks, pictured together in January 2010 in Los Angeles, Hayley was cutting clothes to ‘make them fit’

Wearing a ribbed black wool dress from Simply Be with her own emerald fake fur stole (‘it’s my cuddler for the cold,’ she says, stroking it), if anything Hayley looks smaller in person than in her campaign shots.

She’s tall at 5ft 8in (although she always wears heels; today it is black patent leather boots). But the most plus-size things about her are her eyelashes and luxuriant blonde hair. She has inherited her father’s turquoise eyes and defined jawline.

Hayley talks frankly about how she hit puberty early. ‘I’m so blessed, I love my bosoms,’ she laughs, and juts out her chest in a Baywatch-style pose.

But she wasn’t always so confident in her body. Hayley’s breasts grew when she was eight, long before anyone else in her class. ‘Early development isn’t really talked about, so in the swimming changing room the person next to me would go “what are those?” It was uncomfortable.’

Instead of tearing herself apart over cruel comments from other children — ‘I don’t want to hang out with you because you’re the chubby girl,’ say — or comparing herself to her father’s svelte Baywatch colleagues, Hayley started modelling. 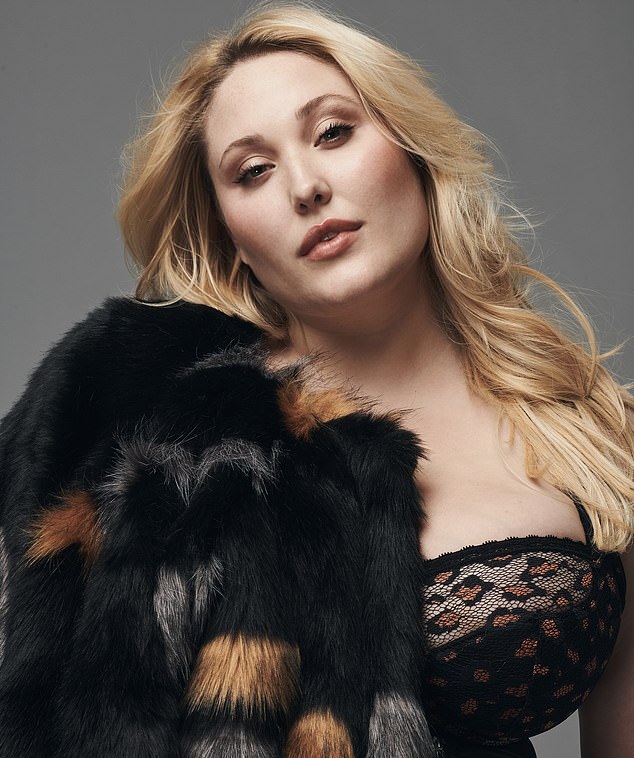 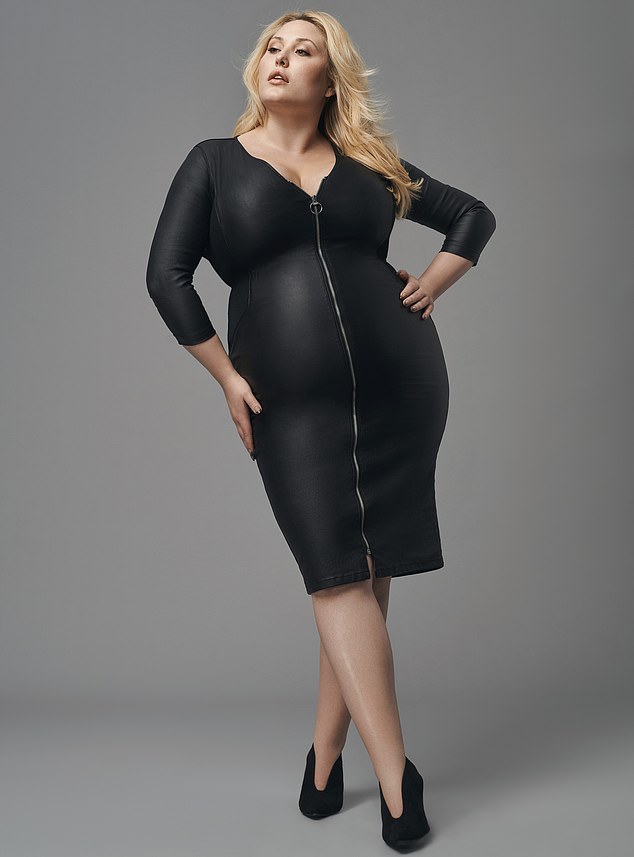 She also hit out at Piers Morgan’s comment that size 22 model Tess Holliday celebrates morbid obesity. She said that the TV personality was ‘not their doctor’

At 14, on the advice of her dad’s publicist, she signed to Ford Models, the prestigious agency that had on its books Jerry Hall and Christy Turlington — joining its groundbreaking plus-size division.

At the time, Ford represented the highest paid plus-size model in the world, Ashley Graham, as well as Crystal Renn, who at a mere size 14, is what Hayley calls an ‘inbetweenie’ — neither plus size nor a regular model. ‘Back then, in 2004, people didn’t know what plus-size fashion was,’ says Hayley. ‘People were confused when I said I was a curve model.’

As Hayley’s career progressed, however, so did the idea that models didn’t have to be a size zero. Today, the catwalk looks more like real life than ever, sales on the website Asos Curve (sizes 16 to 30) are soaring and even luxury site Net-a-Porter has won the battle to stock bigger sizes.

But the process of changing the norm has not been without controversy. When model Tess Holliday, who is a size 22, posed for the October 2018 cover of Cosmopolitan, it sparked impassioned debates about obesity. Was it healthy, some asked, to present such a plus-sized woman as a role model?

Hayley and Tess are represented by the same agency, London-based MiLK Management. What does Hayley make of Piers Morgan’s argument that plus-size models ‘celebrate the morbidly obese’? 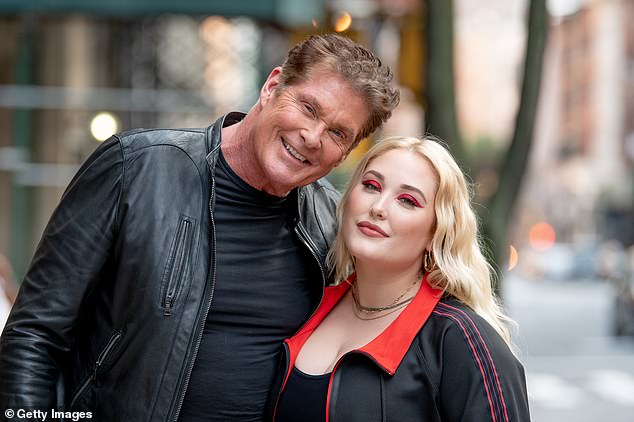 She also said that UK fashion has been streets ahead of US fashion in terms of Curves. (Pictured with her father in New York this year) 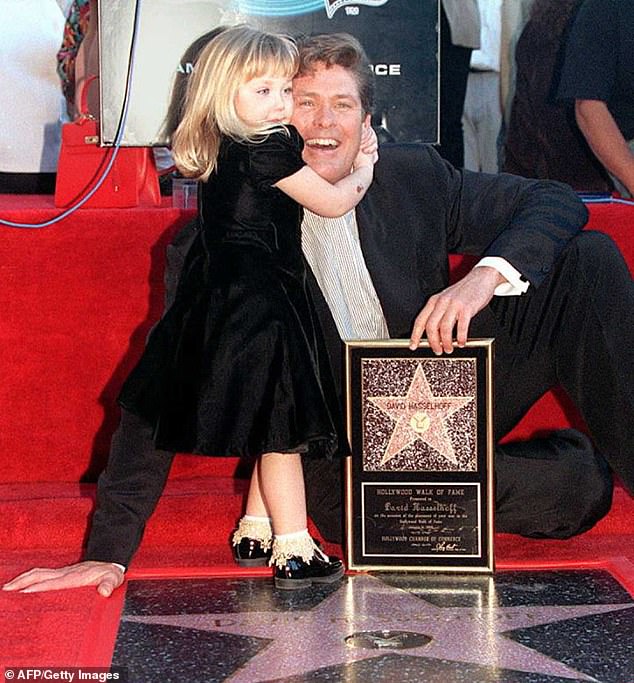 Hayley, aged three, hugs her father during a ceremony honouring him with a star on Hollywood’s walk of fame

‘You’re not their doctors,’ she retorts, seeing no need to judge other women for their size. ‘Curve fashion is about encouraging women to feel comfortable in their own skin.

Showing different body types is a way of women supporting other women. Not only in fashion, it makes a difference in their life.’

She insists she hasn’t felt any pressure to be a certain size as a model — large or small, ‘there’s a place for everyone’. And she’s adamant that her lifestyle and diet are balanced.

‘We’ve always done spin cycle classes as a family and my older sister is a Pilates instructor.’

Labelling people ‘plus-sized’ or ‘curvy’ doesn’t faze her, either. ‘You can call me whatever you please,’ she states. ‘I have nothing against the word curve. Or plus-sized.’

As plus-size becomes more mainstream, salaries are catching up with the rest of the industry. At the top, though, plus-sized models have not reached pay parity, with Ashley Graham earning £6.5 million last year, to Kendall Jenner’s £18.4 million.

‘We should all have equal pay,’ says Hayley. ‘With this campaign we’re saying you can be iconic whatever shape you are.’

Although she says she doesn’t remember what size she was when she started modelling, she’s clear that her first job, a plus-size swimwear shoot, had a life-changing impact. ‘Seeing beautiful, voluptuous, healthy, toned women who I could look up to was empowering. I am so unbelievably glad I started modelling at 14. When you have hindering thoughts as a teenager . . . I was on set with women that I aspired to.’

Fourteen is young to start working, she acknowledges — many agencies require models to be at least 16 — and when Hayley’s career took off she had to be home-schooled.

Stories abound of young models being pressured to look a certain way or pushed into shoots they’re not ready for, and suffering damage to their self-esteem as a result. In the plus-size world, however, she says her experience was very different.

‘It wasn’t too young in my case. Do I believe it is right to have laws where you can start modelling after 18? Yes. But in my case, being a plus-sized model at 14 when the media didn’t speak so openly about curve was important. I was protected.’

That may be thanks in part to the guidance of the family she still speaks to every day.

Her father and mother, actress Pamela Bach, divorced in 2006. A year after the divorce, a video leaked of David drunk, trying to eat a hamburger off the floor. Hayley’s sister Taylor, now 29, is in the video begging him to stop. He later checked into rehab for alcohol addiction. 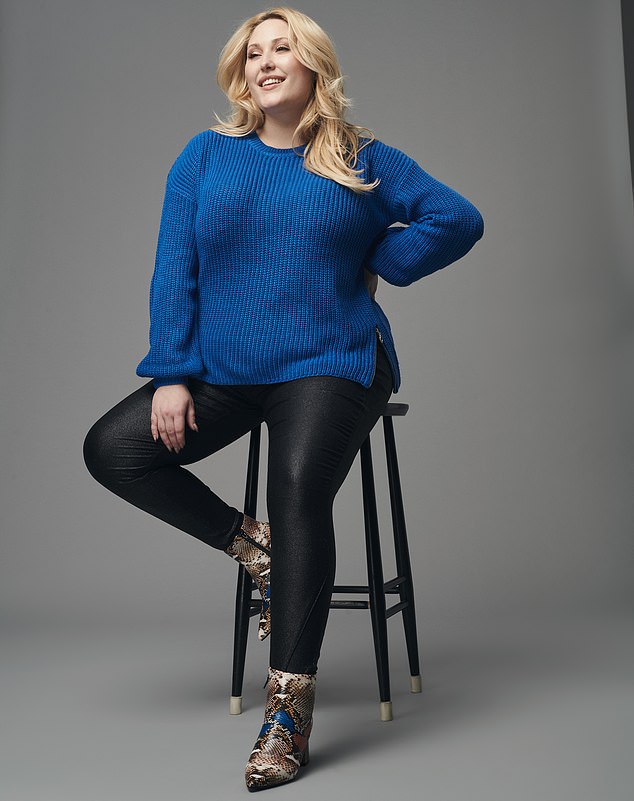 Hayley, pictured here modelling clothes for brand simplybe.co.uk, said her first job was a swimwear shoot, which had a life-changing impact 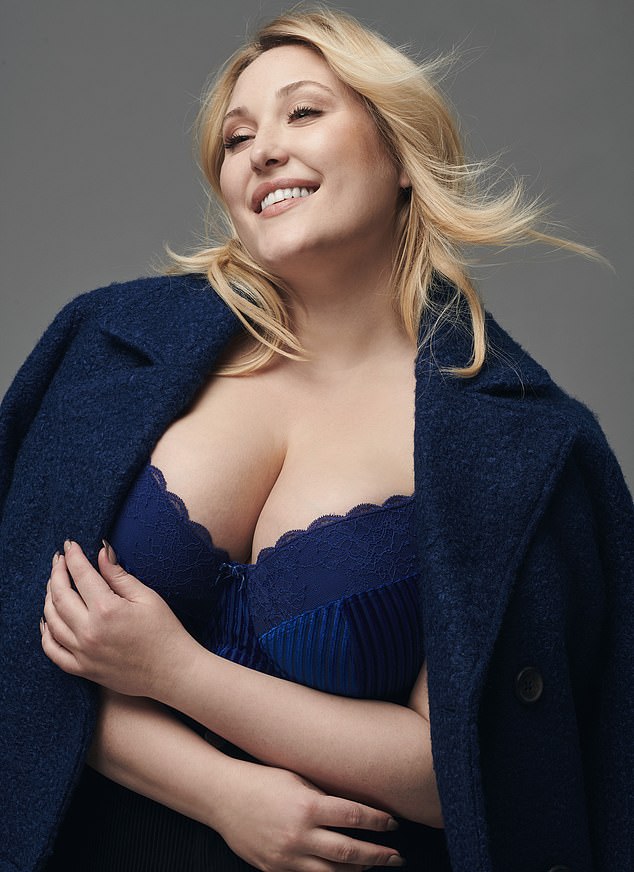 ‘I am so unbelievably glad I started modelling at 14’, she said. ‘When you have hindering thoughts as a teenager . . . I was on set with women that I aspired to’

Hayley will only say she doesn’t drink alcohol, ‘out of preference’, and is ‘proud’ of her parents.

She and Taylor were at her father’s wedding to another Hayley, a 38-year-old former Debenhams sales assistant from Wales, last year.

‘There was never a moment where I realised my family was famous,’ she says. ‘I didn’t know anything different. It’s more that when you grow into being your own person, you realise your parents have paved an amazing path, continuously doing amazing things in their careers.

‘Growing up, I dealt with a lot of trying to find who I was. We all do. The most beautiful thing family can do is allow you to express yourself and mine did.’

She always loved acting and dressing up. Taylor and Hayley liked to dress up as each other as children and ask their parents to spot the difference.

As well as modelling, she has a role in a new TV drama for U.S. network CBS, Why Women Kill, alongside Lucy Liu. ABC’s breakfast show Good Morning America has appointed her its curve style host, and she provides fashion tips on ITV’s This Morning over here.

She’s even in a long-distance relationship with a Brit — her boyfriend of two years is actor Dominic Farrell, ‘based in the English countryside’. She means Kent.

They met through his brother, a friend of hers. ‘We moved in together a month after meeting. ‘He cooks for me. Who doesn’t like an English roast? Not too often, though.’

Now she hopes she, and others like her, can make sure ‘curve’ is more than just a trend.

‘Women still feel that when a curve model is in a campaign, it’s just to tick a box.

‘I applaud that box being ticked, but I don’t want designers to feel [a lack of diversity] will just go away because they have [included a range of models] once.

‘I want them to show people of different sizes, ethnicity, people with disabilities. We should all be represented.’