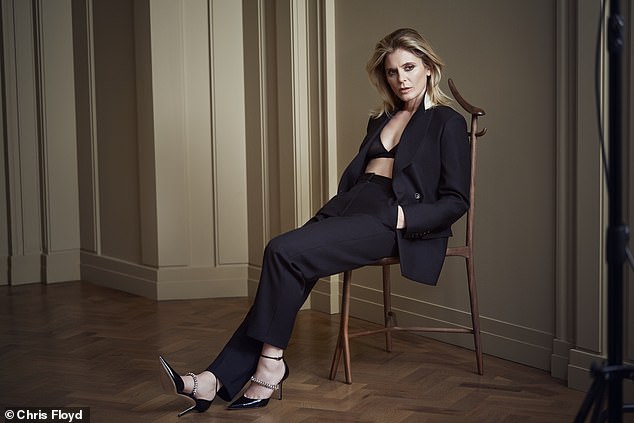 It’s hard not to wonder if Emilia Fox and Marco Pierre White aren’t friends with benefits – in other words, if their relationship is more than just platonic. Two years after the quintessentially English actress and the volcanic chef officially split she’s still very single and they remain, she admits, ‘super close’.

‘He’s a good man and a kind person, it’s a thrill to have him in my life,’ she says, begging the question – what’s really going on? ‘It is literally just a friendship,’ she says, unoffended. ‘A lovely one. When you have been involved with each other’s families, particularly with children, it’s important that you don’t just wave goodbye,’ she adds, referring to Marco’s bond with her daughter Rose, now eight. ‘There is a closeness in that way. We check in on each other and make sure we are all right and catch up. We talk. A lot.’

So, does he still cook for her? That’s surely a benefit of sorts if you date the most mercurial and brilliant chef ever to stoke up a modern British kitchen (Marco was once the youngest holder of three Michelin stars). ‘No. I am chief cook at home, though I do use recipes of his. My favourite is Marco’s macaroni cheese and his tomato pasta. I like to keep things simple.’

Does she cook for him, then? ‘I would never cook for Marco! And there is no way I would ask Marco to teach me cooking either,’ she laughs. 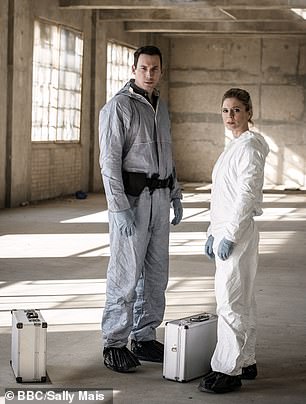 Like many of the millions who watch Silent Witness, the show in which she stars, I am curious about her off-screen life and those years with a man whose dazzling professional success has been matched by a private life that’s gone up and down faster than a twice-baked soufflé. When he wooed Emilia in 2012 Marco had one tricky, estranged wife, two divorces and four children in tow and revelled in his hot, northern hellraiser image. Emilia, meanwhile, is the scion of the elegant Fox acting dynasty (her parents are The Day of the Jackal and Pride and Prejudice actors Edward Fox and Joanna David) and both of her two preceding relationships had been with men in the business.

First there was Jared Harris, star of The Crown and son of acting legend Richard Harris. They married in 2005 and parted three years later. Then there was Jeremy Gilley, the actor and film director turned peace campaigner, her partner from 2009 until the beginning of 2012, and the father of Rose.

Marco’s definitely the odd man out, yet today he’s the one she speaks of with real heart. ‘One of the good things in life is to keep relationships as a friendship, if it feels like the right thing for both of you,’ she says. And clearly, for them, it has been. She is not in contact with Jared. ‘He has married again and has a new life, which is as it should be. We’re not part of each others’ lives, though not in a bad way,’ she says. She’s too diplomatic to reveal anything at all about Jeremy other than they ‘make it work’ in terms of co-parenting.

She has been single since the end of her romance with Marco a couple of years ago. Asked when she last woke up next to a lover, she cries, ‘Argh, I don’t know – it’s like asking Nikki Alexander that…’

Ah, Nikki Alexander, the forensic pathologist Emilia plays in the BBC’s long-running crime drama Silent Witness; a woman whose love life is usually as dead as the people on her mortuary slab. The actor is about to return to the show for a 14th series, in which Nikki’s love life finally appears to be looking up (there’s a romance and she even starts to think about having a family). ‘It’s a role I love as much as the day I began,’ she says. ‘Nikki and I have lived alongside each other for 14 years and I reckon I could have become a pathologist myself twice over.’ The forthcoming series has a definite contemporary edge with one storyline set in the transgender community and another in an illegal drugs lab. ‘I like to think it raises a conversation,’ says its star thoughtfully.

Emilia is happy to see her beloved character potentially coupling up but has no plans to emulate her – she’s found dating hard as a single mother. ‘When children are little, it is difficult,’ she admits, ‘but you can be on your own and that can be a healthy thing. Too often the tendency is to jump from relationship to relationship and I love knowing that I am happy in my own company. Also, my responsibilities to Rose would be a massive consideration before I brought someone new into my life.’

It’s a test Marco must have passed. He used to sit and watch Disney movies with Rose and could be caught singing songs such as ‘Everybody Wants to be a Cat’ from The Aristocats afterwards. Clearly he’s going to be a hard act to follow. Emilia, however, is not in a hurry because she finds her single status ‘a positive experience, genuinely positive’, and there is no biological pressure on her since she is already a mother. (‘Though talk to me again in 20 years’ time when I am sitting by myself, having a party all on my own,’ she jokes.) 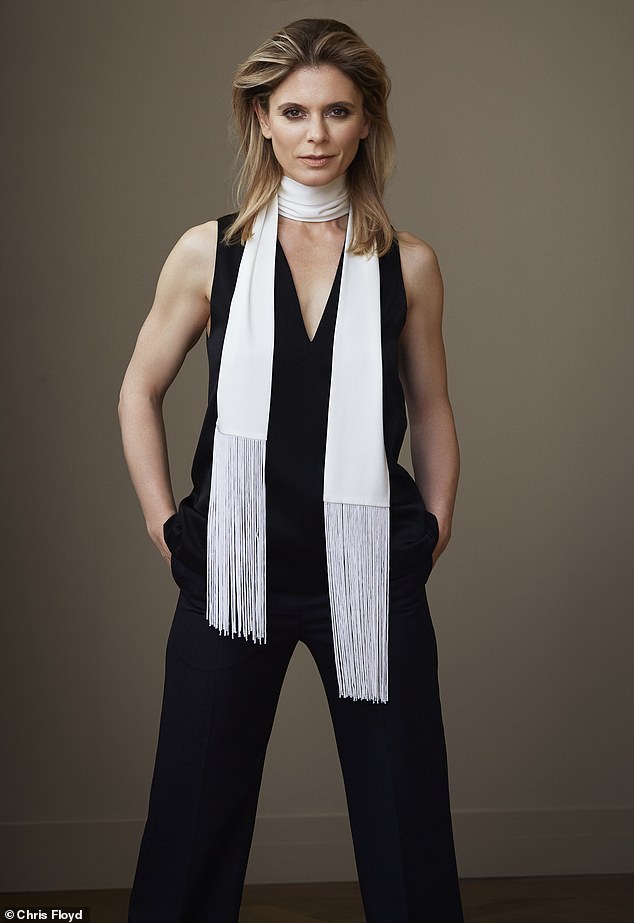 She would have liked a bigger family and has spoken honestly in the past about the miscarriage she suffered during her marriage to Jared. Now aged 44, she says: ‘I am not looking for someone to have another baby with. That makes it easier to sit back. There was a period in my life when I wanted more children, when I would have welcomed another baby, but I don’t feel in any way bereft. My life is so full with Rose that I don’t feel the absence of another.’

Emilia sounds very sane about it all and it’s no surprise to learn she’s in therapy. She began having regular sessions after the collapse of her marriage and to deal with the emotional fallout of losing her first baby. A decade later, she still sees her therapist weekly.

‘There doesn’t have to be a crisis and it’s not about exploring a sexual relationship or family dynamics, it’s how you’re getting on in life generally. My nature is to satisfy everyone else’s needs and having therapy gives me a sense of perspective on that.’ She means it helps her to stop being a people pleaser and prioritise her own wellbeing instead.

As well as her mental health, she has invested in her physical health. She’s a taut size eight, a reformed smoker who rarely has a glass of wine, but last year while shooting her hit Sky One show Delicious (the third series of the sex and cooking comedy drama is on now) she felt the need to begin a proper exercise regime.

The show is filmed on location in Cornwall. Emilia stars alongside Dawn French, the two women playing the second and first wives of a lothario chef who dies, leaving them to work together to rescue his hotel business. Months outside enjoying the beaches by St Mellion and Launceston gave her the fitness bug. ‘I never thought I would be one of those people. But now I run and lift weights. It makes me feel more confident, stronger – and I don’t mean physically. I think it’s a great addition to my life at a time when I am choosing things that make me feel good. For a long time I let other things choose me.’

This lack of a game plan – letting things choose her, as she puts it – might explain why she’s never gone to Hollywood, a path well trodden by a later generation of British actresses such as Claire Foy and Lily James. ‘I have never had a strategy – I probably should have done. When I was married to Jared and we half lived there [in Los Angeles], I would have happily stayed if I had made it work career-wise. But I would do a series of Silent Witness in England then go to the US at Christmas when everyone had shut up shop. And I’d say, “Well, if something happens…” and, of course, it didn’t.’

She is amused rather than angry about this and reiterates the fact that she works for fulfilment rather than fame, but with her acting pedigree and red-carpet good looks, she could have been a far bigger star if she’d reached for it. Instead, she has always been more ad hoc, more old-school English, as befits her family background. 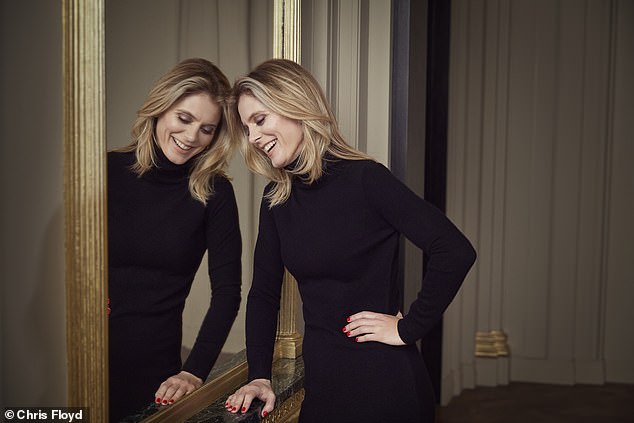 Her uncles are the actor James Fox and the theatre and film producer Robert Fox. Her younger brother Freddie has followed her into the profession and her gang of acting cousins notably includes Laurence Fox, the star of Lewis and former husband of Billie Piper. Twenty years ago Emilia was horrified by the idea of working with any of her relatives. ‘I made a film with my father early on. It was in Canada. I thought, that’s OK, no one will see it,’ she deadpans. (The Anglo-Canadian movie The Republic of Love did indeed garner very mixed reviews.) These days she feels differently and is proud her father and Freddie have just finished a West End run together – a double appearance in Oscar Wilde’s An Ideal Husband that brought critical acclaim to both. ‘That’s the dream, right? Proud and positive – better than trying to hide our roots.’

She still worries that the acting roles will dry up, although if she follows her parents’ example she’s got another 40 years of stage and screen ahead. (Becoming a landscape gardener is her plan B.) She is unafraid of ageing and is optimistic about the number of roles coming through for women in their 40s and older. ‘Drama is about life and life has all of our ages in it. You can’t go backwards so I look at getting older as a privilege. I never feel that more so than doing postmortems on Silent Witness,’ she jokes.

As she ages she mines her own life experiences for her roles. She references a forthcoming plot line for Nikki Alexander in which she struggles to make a transatlantic love affair work, pointing out the similarities to her own marriage to Jared. ‘And as for Sam in Delicious,’ Emilia says, ‘she’s quite fragile inside. She puts on a front, throws herself into her work, a bit like Nikki. In doing that she blocks out her vulnerability and her commitment to finding another relationship because then she won’t get hurt again.’

Is there a parallel not just between the two characters Emilia is playing but with her own life? It would seem so, even if it’s not a conscious one. ‘We live in such a busy world now that it is entirely possible to throw yourself into work and not explore other bits of your life. I recognise myself as someone who thrives on acting and on being a mum and I acknowledge that leaves little room for anything else.’

By now Rose has joined us, all blonde swinging hair and eight-year-old enthusiasm. Mother and daughter are learning Spanish together, and the piano, and Emilia admits to discovering her inner rock chick now her daughter has taken up the drums, too. There’s a lot of nesting and kitchen suppers and no frantic love affair is likely to derail that. Emilia doesn’t know how to work the dating app Tinder and says friends don’t try to set her up with men because they accept that, for now, she’s just not interested.

‘It is so boring. But I like boring,’ she says, not sounding in the least bit bored as she folds a small hand into her own and heads out into the London night. Anyway, with Marco Pierre White as one of your besties, life must be anything but.

Shot in the Empire Suite at Hotel Cafe Royal