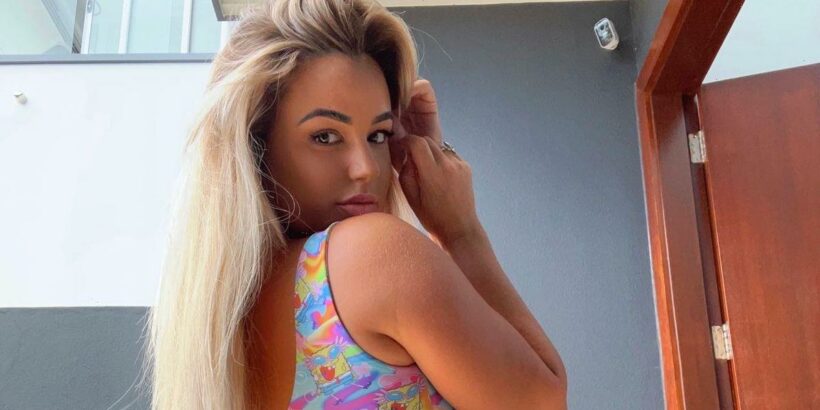 The Australian beauty, who boasts 1.2million Instagram followers, took to the site to model one of her own Moana Bikini designs.

And she took the opportunity to promote self-love as she did so.

Karina was seen showing off what she called her "meaty thighs" and "bumpy booty" as she flaunted her figure in the SpongeBob SquarePants printed swimwear.

The stunner posed with her back to the camera to give followers a good look at her curves as she wore the thong bottoms.

She was seen glancing back at the camera seductively as she did so.

Meanwhile her blonde locks were left straight and swept over in a beach style.

Many accused the reality star of 'promoting extremely unhealthy body standards' after she admitted she lost 16 pounds for to fit into Marilyn Monroe's iconic Met Gala recently.

Having her say, Karina wrote: "It seems the world is torn with opinions on Kimmy K and the Marilyn Munro dress.

"So I thought I’d give you a daily dose of meaty thighs and bumpy booty to calm your nerves."

She added: "I mean… Kimmy K – unlike other celebrities – chose to be incredibly open about her journey to fit into Marilyn’s dress. Even if she wasn’t this open, I feel she would have copped slack regardless, as you can clearly see she lost weight for the event.

"Were we this mad at Renee Zellweger, Matthew McConaughey, Anne Hathaway, Tom Hanks, Jake Gyllenhaal, Mila Kunis, Lily Collins, Jonah Hill, Jennifer Lawrence and Christian Bale when they lost a lot, or gained a lot, of weight for their roles?

"We all knew they did it – and for a purpose and their role – but unlike Kimmy K they didn’t openly speak about it on Social Media. But afterwards, many times they were applauded for their commitment to their cause and the role they’ve chosen to play.

"I totally understand both sides of the argument. But keep an open mind and remember to place this in context. If you do feel upset or triggered, take yourself away from the topic and watch baby duckling videos instead.

"You – and everyone else – don’t HAVE to take your life cues from people that trigger you – curate your own sphere of influence."

Fans were loving her honest post, with it racking up more than 7,000 likes.

One exclaimed: "Well said," as another gushed: "What a babe."

A third cheeky admirer also added: "I think this picture does the opposite of calming nerves."