It’s the fashion, stupid! Bill Clinton dons traditional Lederhosen as he and Hillary live it up at Munich’s Oktoberfest during German getaway

Bill and Hillary Clinton took a break from their respective projects to enjoy Oktoberfest together in Munich, Germany.

The political power couple was spotted posing for pictures with women outfitted in traditional dirndl dresses on Friday while enjoying the world’s largest beer festival.

Bill Clinton (left) can be seen embracing the Oktoberfest spirit by wearing a green button up vest paired with Lederhosen shorts and knee-high socks. Wife Hillary (right) was full of smiles as the pair returned to their hotel after an evening at the festival 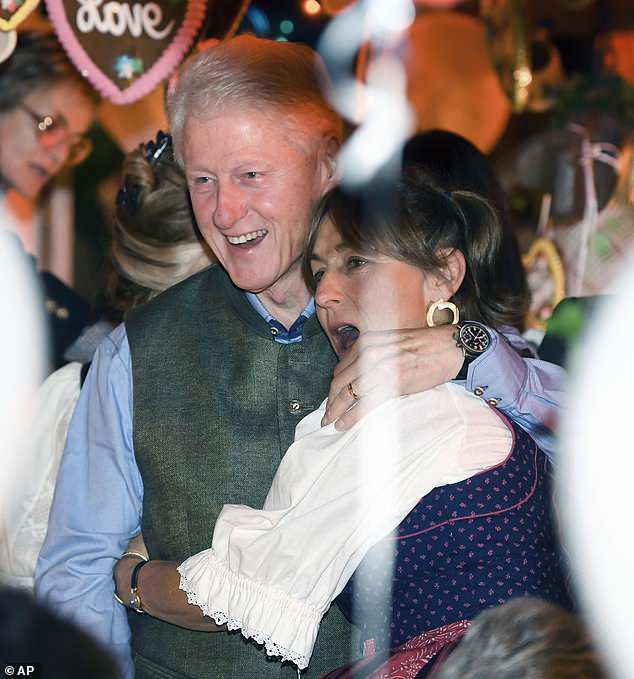 Popular president: Bill, 72, flashed a grin while hugging an unknown festival-goer who was wearing a traditional dirndl dress 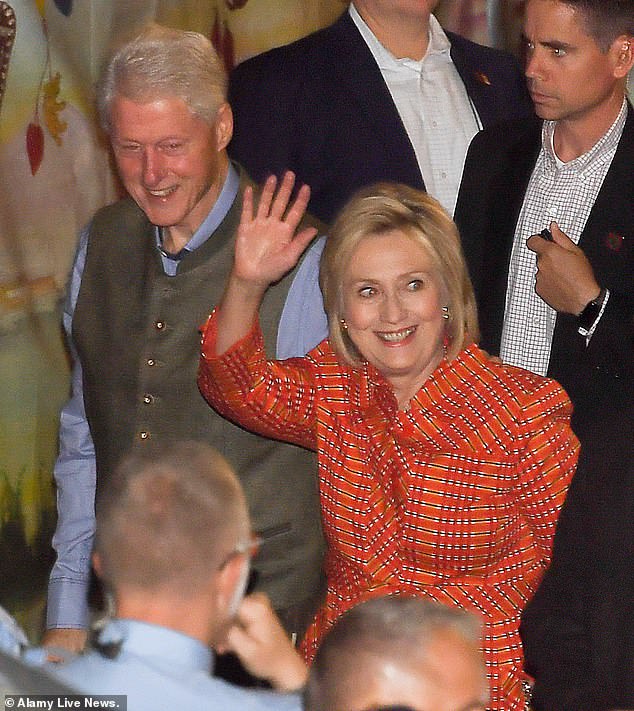 Out and about: Bill was beaming and Hillary waved to the crowds as they arrived at the Kaefer festival tent at Oktoberfest in Munich on Friday

Hillary donned a bright orange and red patterned coat, while Bill sported a green vest over a blue button-up shirt.

The former president had his arm lovingly wrapped around his wife’s shoulders when they arrived at the festival, which is running until October 7.

The couple appeared to be in high spirits as they were pictured smiling and waving at people while walking through the crowds.

Bill was later seen flashing a grin as he hugged an unknown female guest during the celebrations.

The woman, who was wearing a dirndl dress, happily wrapped her arms around his waist during the warm embrace.

The former president was also seen chatting with another woman in the Käfer tent at the event. 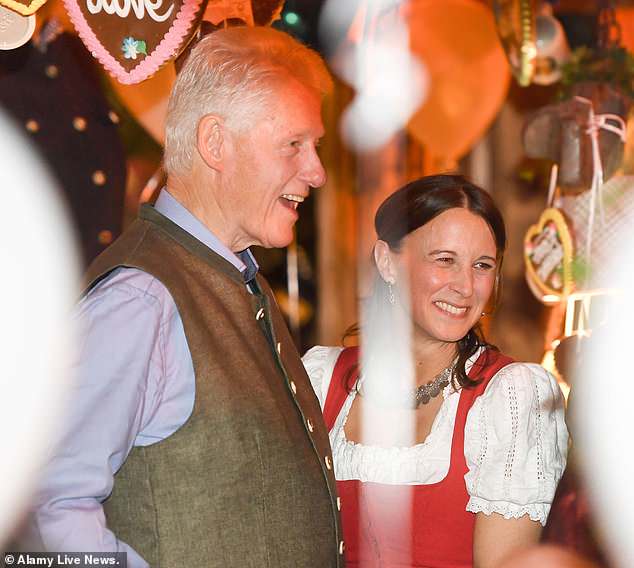 Meet and greet: The couple appeared to be in high spirits as they were pictured smiling and waving at people while walking through the crowds 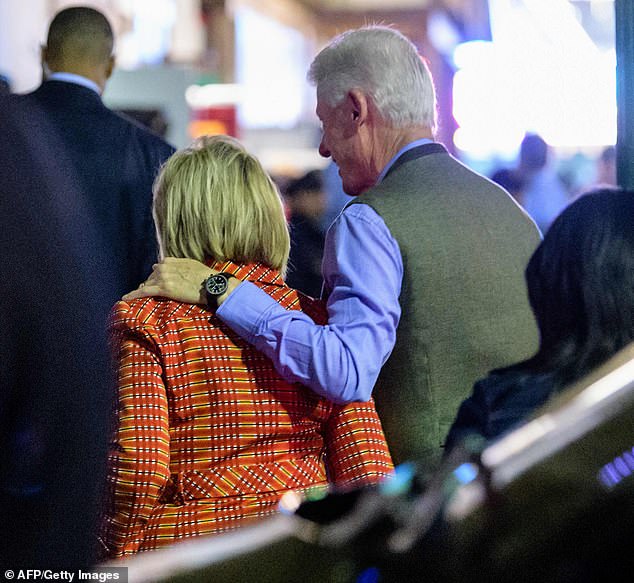 Look of love: The former president had his arm lovingly wrapped around his wife’s shoulders when they arrived at the world’s largest beer festival, which is running until October 7

Oktoberfest is held annually in Munich, and more than six million people from around the world attend the event every year.

The Clintons’ Oktoberfest appearance came just days after Tuesday’s announcement that Hillary has teamed up with director Steven Spielberg to work on a series about the struggle to get the 19th amendment passed in Tennessee.

While attending the Atlantic Events Festival, Hillary revealed how reading journalist Elaine Weiss’ book ‘The Woman’s Hour: The Great Fight to Win the Vote’ sparked the idea for a miniseries.

She then pitched the idea to Spielberg who said he loved the proposal.

Following Hillary’s run for president in 2016, the couple has dabbled in a variety of projects and events while enjoying their time away from the political limelight.

They enjoyed a date night in New York City at Christina Aguilera’s concert at Radio City Music Hall on Wednesday before jetting off to Germany.

The former first couple were seen chatting with fans and posing for photographs while enjoying the concert with Hillary’s former campaign aide Huma Abedin. 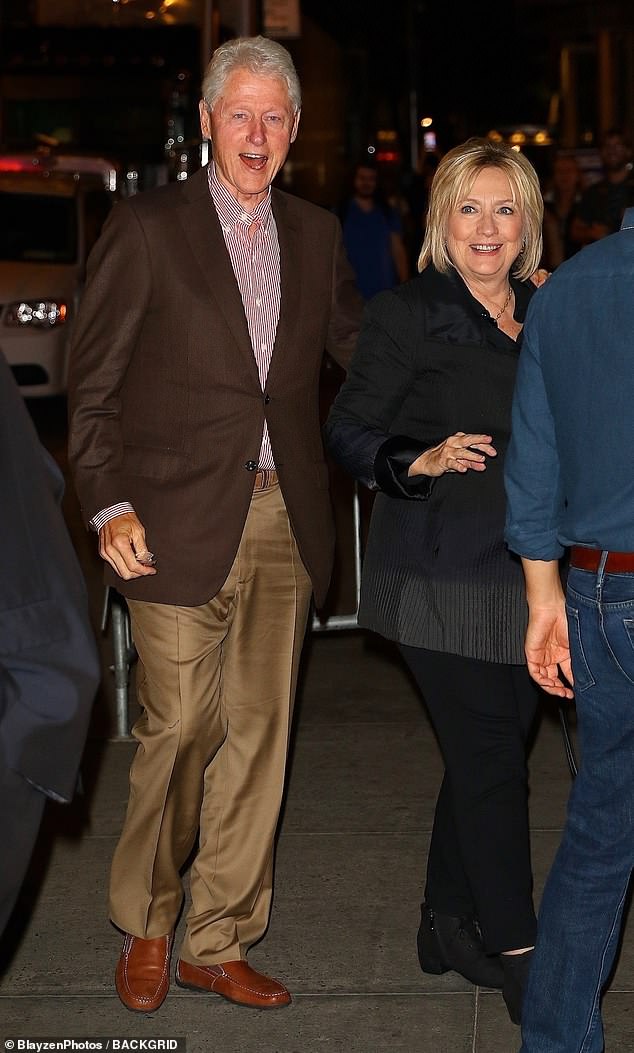 Living it up: The political power couple enjoyed a date night in New York City at Christina Aguilera’s concert at Radio City Music Hall on Wednesday before jetting off to Germany

During the show, Aguilera, 37, was joined onstage by special guest Lil’ Kim, 44, for a rare performance of their 2001 hit cover Lady Marmalade.

Huma wore a black Lingua Franca sweater with ‘November is coming’ written in white across the front — a reference to the upcoming mid-term elections. 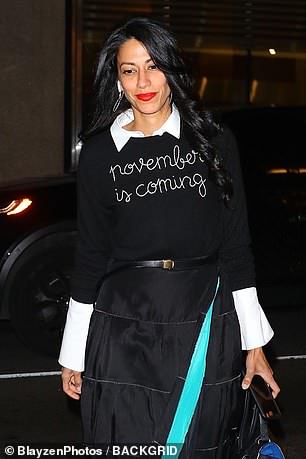 Statement piece: They were joined by Hillary’s former campaign aide Huma Abedin, who wore a black Lingua Franca sweater with ‘November is coming’ written in white across the front

Pictures posted on social media show the trio smiling as they pose with fans and take selfies of the auditorium.

As the couple entered the auditorium, crowds of people cheered and clapped. They sat among the rest of the fans for the sold out gig.

One Instagram user who was sitting near the trio posted a picture with the caption: ‘I’M SITTING RIGHT NEAR HILLARY AND BILL!!!!! @hillaryclinton #hillaryclinton #president #concert #ohmygod.’

Aguilera’s Liberation Tour is her first concert tour in a decade.

The Clintons are believed to be close friends with the pop star, who has performed at various events for them over the years.

Aguilera even hosted a fundraiser when Hillary was campaigning to become president in 2015.

At the star-studded event, the singer performed for the guests who paid as much as $10,000 for four tickets.