Billie Eilish blew fans away with some very sultry and confident moves during her 2020 AMAs performance of ‘Therefore I Am.’ She recreated the exact same fashion from the song’s music video.

A year ago Billie Eilish was making her very first major awards show appearance at the 2019 American Music Awards. In the year since, the 18-year-old became a multiple Grammy winner and the toast of the music industry. She returned to the 2020 AMAs on Nov. 22 to perform, and didn’t look for a great new costume. Instead, she wore the exact same patterned cardigan and long shorts to perform “Therefore I Am” as she did in the tune’s newly released music video. But unlike 2019’s appearance, she came with some incredibly sexy and confident dance moves that got fans hot and bothered! 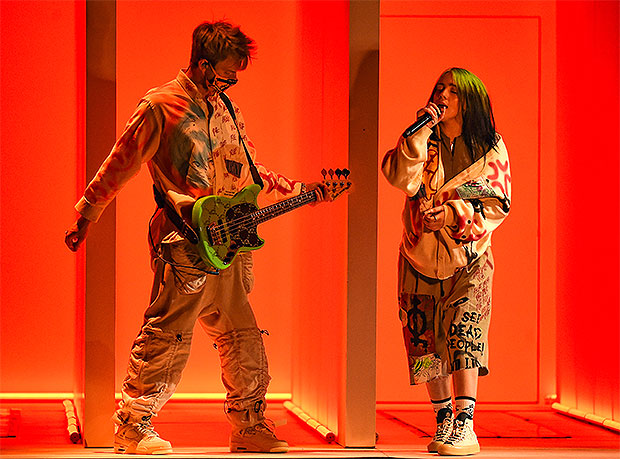 Billie stayed with the hair she’s been rocking for months, with her bright green roots and shoulder length black tresses. She performed onstage with her brother and primary collaborator Finneas inside a red backlit box-like set. The tight enclosure was a far cry from her music video, where she ran all around an empty shopping mall. Billie showed off some smoldering dance moves that had fans declaring how “hot” she was during her performance!

She has dropped two amazing songs since quarantine began in March, as she’s recording new music for her second studio album. The dreamy and hopeful “My Future” came out on July 30, followed up by “Therefore I Am” on Nov. 12. She shot an accompanying video for the latter, frolicking and dancing through an empty mall, which was shot at SoCal’s Glendale Galleria overnight when the place was without customers or employees. She even got into a twerk-off with a pal to some booty shaking music in her down time, which she shared with fans in an Instagram video.

At 2019’s AMAs, Billie took home Best New Artist and Best Alternative Rock Artist trophies. This year she’s up for Best Song and Best Video for “everything I wanted,” and will be competing with herself in the latter category for her music video for “all the good girls go to hell.” She performed that song the 2019 AMAs, marking her arrival as a total superstar in the making in her awards show debut.

Last year, Billie showed off on the red carpet how she was still a little shy with all of the attention she was getting for her debut album, When We All Fall Asleep, Where Do We Go? She wore a loose Burberry long sleeve shirt that came down to her thighs, loose matching pants and a shoulder-length white hat covered by a glittery silver mask partially obscuring her face when posing for photographers on the red carpet. But she’s no longer that shy 17-year-old newcomer anymore, and her extremely confident 2020 AMAs performance showed it!