Bride photoshops ‘badly behaved’ bridesmaid OUT of her wedding day photos – after she showed up late, gossiped and didn’t attend the bridal shower

Wedding photos are supposed to capture the beautiful bride enjoying the best day of her life while surrounded by the people she loves the most.

But one newlywed, from Oregon, took the extraordinary step of deleting one of her bridesmaids from her wedding pictures after she nearly ruined her big day.

The bride revealed that she only invited the woman to be one of her bridesmaids because she felt ‘pressured’ to do so, and hoped she would say no.

But not only did the woman accept the invite, she then refused to take part in any events before the wedding, rocked up four hours late for the ceremony and even badmouthed the bride to her friends. 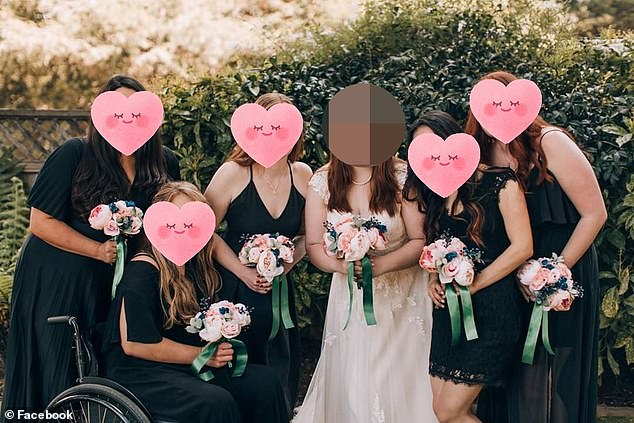 BEFORE: The bride had five bridesmaids included in her wedding party 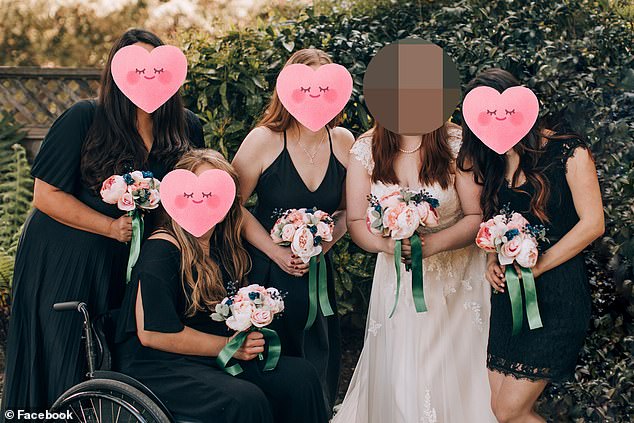 AFTER: But when she fell out with one of the bridesmaids she decided to crop her out

Should the bride have left her bridesmaid in the photo?

Should the bride have left her bridesmaid in the photo?

The bride revealed on Facebook that the ‘awful’ bridesmaid refused to take part in the bridal shower, bachelorette party and rehearsal.

She also would not help with planning the wedding and even boycotted the bridesmaids’ group chat.

On the day of the nuptials, the bridesmaid didn’t want to get ready with the rest of the wedding party and decided to show up moments before the ceremony began, which was ‘stressful’.

‘The entire ceremony she was making a very upset face and silently making faces and eyes at her husband,’ the bride wrote.

‘At the reception she refused to speak to me at all. We’re talking, I’m trying to converse with her and she just blatantly ignores me.

The bride decided to send a follow up message apologising if she had offended her in any way, but her bridesmaid sent ‘paragraphs’ back saying ‘how awful’ she was.

She finished the messages by saying she thought the pair should just pretend the wedding never happened. 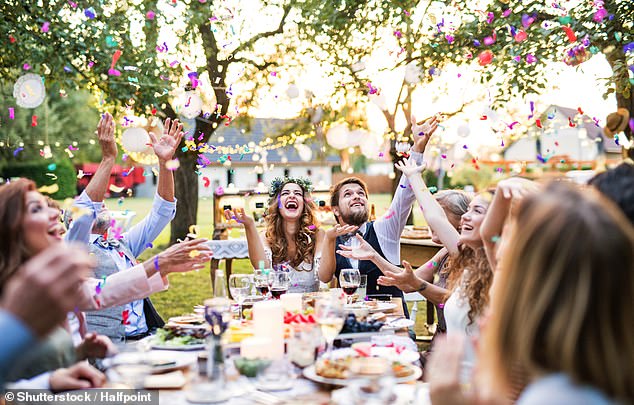 ‘I’m not about to pretend that my wedding never happened but I’m all for pretending that she was never there,’ the bride said.

‘I know that this is all pretty petty bulls*** but I’ve had problems with her for the past three years and her asking me to forget that my wedding even happened really pushed me over the edge.’

Other members of the Facebook group agreed that her bridesmaid sounded like a nightmare and she was right to remove her.

‘She doesn’t deserve to pop up in your head every time you look at photos of your wedding,’ one woman said.

‘Good for you for physically deleting her. You don’t deserve to have the happiest day of your life ruined by someone who didn’t bring anything positive to it.’

‘That is great Photoshop though! If I hadn’t seen the original I would never had known there was a person cut out,’ another said.